Empowered by a few more progressive seats this session, reproductive rights and justice advocates at the Capitol on Wednesday morning laid out a far-reaching legislative agenda to restore trust and respect for women making their own medical decisions and to expand access to health care amid legislative attacks on abortion rights. 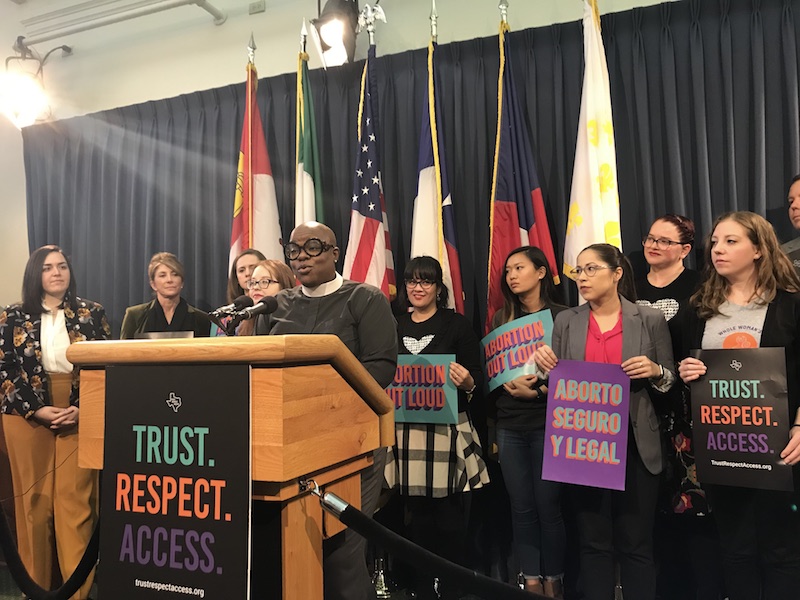 The “Trust. Respect. Access.” multiyear campaign –supported by a coalition of groups including NARAL Pro-Choice Texas, Whole Woman’s Health, Planned Parenthood Texas Votes, the ACLU of Texas, the Lilith Fund, and the Texas Freedom Network – hopes to undo damage caused by conservative anti-choice policies and widen reproductive health access for some of the state’s most vulnerable women. Advocates say a growing number of legislators have signed on to support the campaign, including Austin Democratic Reps. Sheryl Cole, Donna Howard, Celia Israel, Vikki Goodwin, and Eddie Rodriguez.

“Right now, the consequences of a dismantled reproductive health care infrastructure are impacting Texans who can’t afford it, live too far away, or are incarcerated,” said Sam Robles with Progress Texas. “Our agenda sets out to create a Texas where people receive trust, respect, and access to thrive.”

The comprehensive agenda covers sex education, extending Medicaid coverage, assisting pregnant women, and repealing abortion barriers. A sampling: A trio of bills (House Bills 606 & 2029 and Senate Bill 189) would grant automatic enrollment into the Healthy Texas Women Program for women who age out of CHIP and Medicaid. Six bills (including HB 241 and SB 308) seek to prolong Medicaid coverage for women to 12 months post-delivery or -miscarriage.

HB 249 would repeal the state’s burdensome 24-hour pre-abortion sonogram law, while HB 248 looks to remove state-mandated and scientifically inaccurate information doctors must hand over to abortion-seeking women. Four of the bills being pushed by the coalition hope to make feminine hygiene products tax-exempt. Other bills are specifically aimed at assisting mothers: HB 253 addresses postpartum depression while HB 541 allows mothers to breastfeed in any location.

HB 1071, dubbed Marlise’s Law, would require providers to honor advance directives and do-not-resuscitate orders of pregnant women. It is named after Marlise Muñoz, who was at center of a medical ethics controversy in 2014 when her husband fought Texas law to allow her to be taken off life-support. “If a pregnant woman is facing a terminal medical condition, current Texas law allows her decisions about her own care to be overridden, even if she has instructed her doctors and family that she does not want medical interventions,” said Anjali Salvador, staff attorney for the ACLU of Texas. “Marlise’s Law would change the horrible status quo to give pregnant women and their families the same rights as every other Texan to make their own decisions about end-of-life care.”

Sen. José Rodríguez, D-El Paso, author of the “Whole Woman’s Health Act” (SB 150), a broad bill that “enshrines” Roe v. Wade and repeals abortion laws that burden women, said that while the U.S. Supreme Court has upheld the constitutional right to abortion, for many Texans that right doesn’t exist in reality. “This is especially true for women of color, low-income people, queer and trans individuals, undocumented immigrants, and pregnant people who live in border and rural communities,” said Rodríguez.

Rev. Deneen Robinson, policy director for the Afiya Center, criticized the “implicit bias” and “underlying racism” that leads to black women facing disproportionately high rates of maternal mortality in Texas, a lack of preventative health access, and higher rates of shackling when incarcerated while pregnant. Going “way off script,” Robinson slammed the evangelical opposition to abortion, which equates religious clergy with a fervent hostility to the medical procedure. “As a person of faith and a Christian, I am going to reclaim that argument,” said Robinson. “I follow Jesus Christ, and what I love about my faith is that everyone has the right to choose. I believe in abortion access and believe women, especially in a state as resource-rich as Texas, should have access to all reproductive health care.”

The ambitious campaign, which began in 2015, now sees an extra boost thanks to the November elections. Robles pointed to the loss of 14 seats by conservatives and the 12-member Democratic gain in the House. “Progressives are so close to making it a reality,” she said. Although Republicans still hold steady majorities in both chambers, the demographics of committee makeups are generally “fair,” said Robles, increasing chances of proactive bills seeing the light of day.

A handful of the group’s proposed measures also see bipartisan support, including a Medicaid extension bill (HB 411) co-authored by Rep. James White, R-Hillister, and a bill that covers contraception by CHIP (HB 800) co-authored by Rep. Sarah Davis, R-West University Place. While anti-abortion HB 1500, which bans the procedure at six week of pregnancy, was recently referred to the the House Public Health Committee, Robles says the bill isn’t reflective of what most Texans believe. Indeed, a 2018 Quinnipiac University Poll finds that 62% of Texas voters agree with the Roe v. Wade decision and support abortion rights.