Michelle Obama, and All Who Love Her

My name is Nina Hernandez, and I’m a staff writer at The Austin Chronicle. I’m a native Austinite, raised by a single mother, who now makes a living watchdogging my hometown’s political elite. 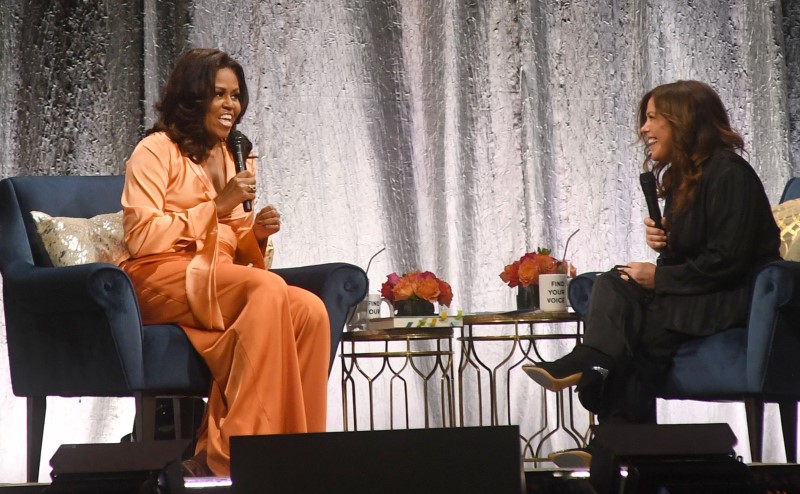 I’m a loudmouth. I’m queer as fuck. I struggle daily to maintain my mental health. And I’m becoming someone who owns her story and experiences, warts and all.

Because former First Lady Michelle Obama can never make it just about herself, the opening to the Austin leg of her Becoming book tour Thursday (Feb. 28) featured a troop of Austinites – including an Army spouse, a future cosmetologist, and an out lesbian – sharing their own “becoming” stories. As did conversation moderator, celebrity chef, and longtime Obama friend Rachael Ray: “I am becoming a woman who realizes turning 50 is just the beginning,” she said.

Over the next hour or so, the packed Frank Erwin Center crowd listened to Obama’s own story unfold, from her childhood in Chicago “pieced together with duct tape and love,” to the job at a prestigious law firm where she’d mentor a young Barack Obama, to the 2008 election victory that launched her family “out of a cannon and into some underwater universe.” Throughout the next eight years, she’d hold her own through racism, scrutiny, and unrelenting Republican ugliness with a grace and dignity few have managed in modern American politics.

“I was female, black, and strong, which to some people translated only to angry.”

Recounting how she broke down into tears upon leaving the White House for the last time, Obama gently nudged the current administration. “It was so hard,” she recalled telling her husband, “going eight years without a scandal.”

The George W. Bush era was undoubtedly worse. A guy who won a primary amid whispers his opponent had fathered a black child (!) ultimately won the presidency in a dubious Florida recount. After lying its way into the war in Iraq, the Bush administration hung on for re-election as it used homophobia to drive turnout in key states.

So as far as I knew, politics was purely a game of cruelty and obfuscation – a game where people I loved and the people I looked like were at best pawns.

The next eight years would produce more of the political ugliness I’d become accustomed to growing up, but with someone to cheer for and admire on the other side. Communities like mine across the country watched as Michelle brushed off the racist barbs flung at her daily, seeing in her a reflection of our own experiences living in a country that espouses diversity in rhetoric, but which has failed to put it into practice time and time again.

“I was female, black, and strong, which to some people translated only to angry,” she writes in Becoming. It was a far cry from the life she’d planned on living. She admitted to the Erwin Center crowd that the only reason she agreed to the 2008 campaign was that she thought her husband would lose to early favorite Hillary Clinton. Then, all of a sudden, Barack was neck-deep in building a transition team for the White House. “This is usually how it’s done,” she joked, taking a rare jab at the Trump administration. “No shade intended. Just facts.”

It’s not surprising that the woman who coined the phrase “when they go low, we go high,” wouldn’t come out swinging against the man who’s busy dismantling many of the things her husband achieved. For the many of us who love her, it’s expected that she would handle this turn in her life much as she’s done with the ones before it.

She did admit, however, the true cause of her tears on that final Air Force One flight. “To go from the inaugurations that we had, that were filled with all of America,” she said, “to sitting on that stage and seeing their version of America. It was painful.”