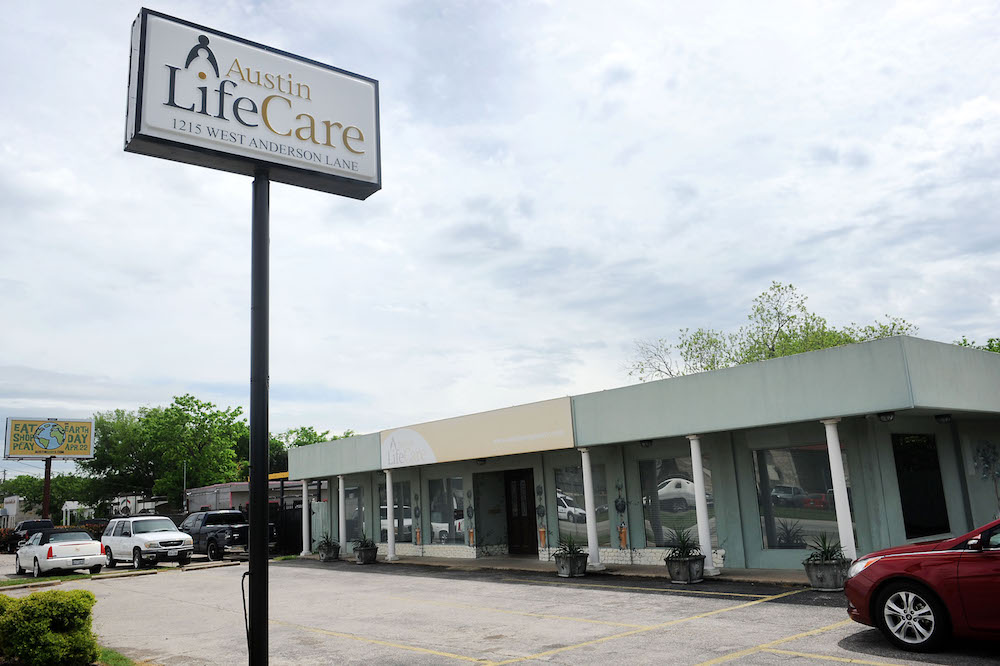 The Chronicle reported yesterday that after 16 years at I-35 and Highway 183, Whole Woman’s Health – which prevailed over the state of Texas and its onerous clinic regulations at the U.S. Supreme Court – lost its lease to a higher competing offer by Andy Schoonover of Lion Venture Partners.

Schoonover has, since 2017, also been the executive director of Austin LifeCare, according to the nonprofit’s federal tax filings; he and his wife also lead Carrying to Term, an organization that assists women who want to give birth despite having a terminal prenatal diagnosis. It boasts working with CPCs in 23 states. On Thursday, after our article was published, Schoonover requested that we take down our “inaccurate” story and insisted Carrying to Term would not occupy the space – but did not disclose that Austin LifeCare would relocate there from its current home on Anderson Lane. In a letter to his investors obtained by Spectrum News, Schoonover says the new space will offer “STD/STI testing, well woman exams, cancer screenings, ultrasounds and limited non-abortifacient contraception.” Schoonover did not return our request for comment on Friday.

As a CPC, Austin LifeCare warns clients of the purported “spiritual, emotional, and psychological effects that can occur after an abortion,” offering “Bible studies” to cope. “A medical/chemical abortion may seem like a quick and easy solution to your unplanned pregnancy, but there are several things to consider before making that choice,” its website reads, following the advertisement of free ultrasounds, which – left unsaid – fail to count toward Texas’s 24-hour pre-abortion sonogram requirement. Austin LifeCare also offers “abstinence-until-marriage” education programs in local schools.

On a visit to the center in 2015, the Chronicle discovered several pieces of literature that discouraged and shamed women out of choosing abortion care, with overt religious tones and medical mistruths. However, Austin LifeCare, like other CPCs in Texas, has received tens of thousands in taxpayer dollars through the state’s Alternatives to Abortion program, while offering few actual services. From 2015-2018, Austin LifeCare received more than $200,000; of that, nearly half went toward “counseling.”

Austin LifeCare also successfully sued the city of Austin after Council in 2010 passed a “truth in advertising” measure requiring CPCs to inform clients through signage that they offer few services and do not make referrals for abortion care. They have also offered to pay higher rent if allowed to take over the city-owned space on East Seventh Street where Planned Parenthood provides preventive health services (and not abortions).

“Even though they were not forthright, there was never a question in our minds that the organization pushing us out of our space was likely to be an anti-abortion crisis pregnancy center,” says Amy Hagstrom Miller, founder of Whole Woman’s Health. “These fake clinics – often funded by Texans’ tax dollars – exist to deceive, manipulate, and shame women who turn to them for help. Of course, their business practices mirror those habits, and this shady, deceptive deal is a perfect example of the fight abortion clinics are up against every single day.”

Hagstrom Miller expressed worry that many of her clinic’s patients, including non-English speakers, will show up to the CPC, mistaking it for Whole Woman’s Health – precisely the goal of the anti-choice movement. “We fear and mourn for those patients now, knowing they’ll be greeted by non-licensed workers in an unregulated facility posing as medical staff, waiting to force their political ideology on someone who simply wants to have an abortion.” Calling the deception perpetuated by CPCs neither “Christian or moral,” Hagstrom Miller is calling on solidarity from the local community. “Now, more than ever, we need the Austin community to rally behind us,” she said. “We can’t let the anti-abortion movement lie to the public like this. We are going to stand in the light.”