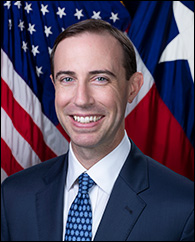 Rather than tuck his tail between his legs, promise to do better next time, and humbly apologize for the “voter fraud” fiasco he unleashed across the state, Texas Secretary of State David Whitley doubled down on his defense during a hearing before the Senate Nominations Committee on Thursday, Feb. 7.

The list Whitley sent to all 254 Texas counties nearly two weeks ago included 95,000 registered voters who the SoS said were potentially not U.S. citizens (58,000 of whom have voted in past elections), sparking condemnation from civil rights and voter advocacy groups and spurring three lawsuits, including one co-filed by an Austin resident, that charge the SoS with intimidating naturalized citizens. Fraught with errors, the list – pulled from Texas Department of Public Safety data – included the names of thousands of Texans who had become naturalized citizens after obtaining a driver’s license or ID card.

Gov. Greg Abbott appointed Whitley to succeed Rolando Pablos in December, but he still needs confirmation from the Senate. The Nominations Committee has not yet voted to send Whitley’s confirmation to the full Senate, and advocacy groups including Progress Texas and Common Cause have called for senators to reject his confirmation. While Nominations Chair Sen. Dawn Buckingham, R-Lakeway, had said the committee would take a vote on the nomination this week, she since has punted the decision into the future without explanation.

Reticent to go on record with the media after the voter list debacle, Whitley had no choice Thursday morning but to face the wrath of Nominations Vice Chair Sen. Kirk Watson, D-Austin. When asked point-blank if he was “willing to admit” to any mistakes made in the voter list, Whitley, formerly an aide to Abbott, placed the blame on “trusting” DPS data. “We can always improve the process, but the data is what the data is,” he said, amid reports from several counties claiming thousands of erroneous names.

Harris County has flagged some 18,000 names (out of about 30,000) that should never have been on the list, while Travis County (still in the process of review) has removed at least 1,600 (out of more than 4,500) names as of Thursday, according to updated county data. Whitley did admit to not even looking over the DPS data before blasting out his advisory to counties to investigate potential illegal voting – which spurred Texas Attorney General Ken Paxton, the state GOP (in a fundraising appeal), and then President Trump to hit the panic button on social media.

When asked by Watson if the release “creates the appearance” of accusing people of voter fraud, Whitley pleaded that his office has no investigative or prosecuting authority. Yet instead of allowing counties to vet the data first, Watson noted, Whitley “immediately” sent the list to the AG’s office; Whitley said he simply wanted to get the data “in the hands of someone who could do something with it.”

In a particularly awkward exchange, Sen. Royce West, D-Dallas, asked Whitley, as the state’s head elections officer, to define the term “voter suppression.” Visibly uncomfortable and clearly seeking to avoid the question, Whitley retorted that the definition was somehow “irrelevant.” “You are the secretary of state,” West responded flatly. “It is relevant to me if I’m going to vote for your confirmation.”

Sen. Carol Alvarado, D-Houston, pointed out that Whitley’s list targets Latino voters, whether intentionally or unintentionally. ”There seems to have been a lack of due diligence,” said Alvarado. “The conclusion I’m drawing is that either you or someone in your office didn’t check your work product, or someone intentionally allowed information that was inaccurate to go out. That’s what I’m trying to figure out.”

The Texas Civil Rights Project, which is leading one of the three lawsuits against Whitley, said the hearing only “deepened” its concerns regarding the flawed voter purge list. “Instead of taking full responsibility for this debacle, he passed the buck to the previous secretary [Pablos] and the Department of Public Safety,” said TCRP’s Beth Stevens.

“Most alarming for voters, [he] admitted that he sent this list of individuals to county officials and the Attorney General before knowing all of the facts to determine voter eligibility,” Stevens continued. “As a result of this reckless action, tens of thousands of Texans might be unjustly purged from the rolls and become targets for investigation and prosecution.”

On Monday, adding more fuel to the fire, Keith Ingram, SoS director of elections, went before the House Elections Committee and seemed to contradict Whitley, saying the office was indeed aware the list could have likely included naturalized citizens. “We understood that there was a significant possibility that some of those folks had since become naturalized,” he said.