Board set to decide in June on campus consolidations 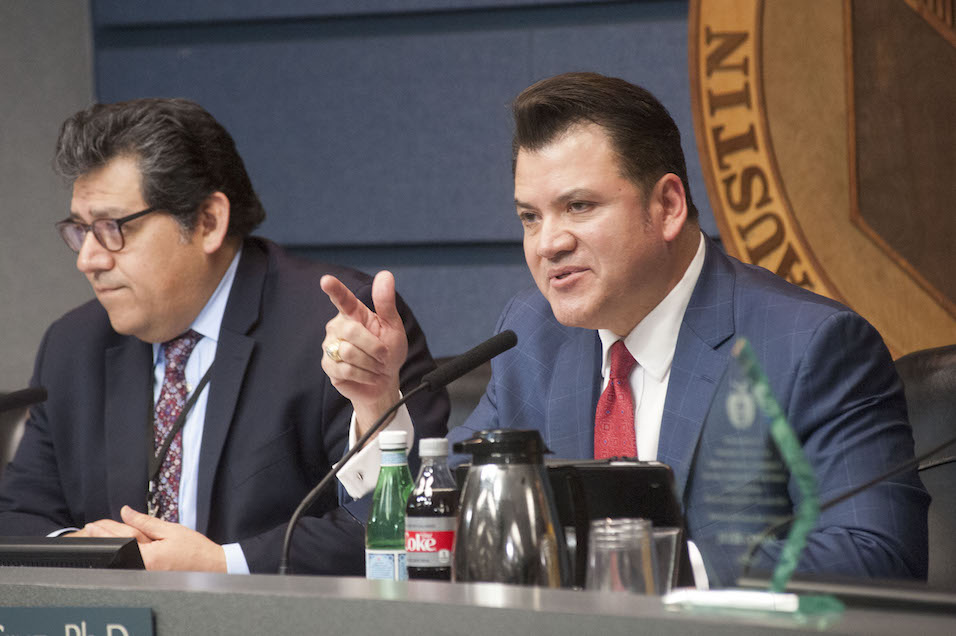 Austin ISD is taking its first concrete steps toward consolidating district schools, with Monday’s work session of the Board of Trustees. That discussion kicks off a 19-month process to position a yet-to-be-determined number of campuses for closure, with those properties available for other community benefits such as housing or parkland.

“The goal is truly [to provide] 21st century learning spaces for as many kids as we can,” AISD Superintendent Paul Cruz said of the emerging plan. The district says it will consider a variety of criteria, to be worked out and approved by the Board of Trustees, as it weighs consolidating or closing campuses. The criteria created for the 2017 Facilities Master Plan could inform that process; in that framework, “Tier 1” criteria include:

However, Cruz made clear the district is “talking about looking at boundaries, about the diversity of that particular region, the programming there, [and] transportation opportunities,” he said. “It's not just a simplistic look at enrollment. … I don’t see that happening.”

A third tier of criteria includes “additional analysis” of items such as traffic and parking studies, environmental considerations, and other site-specific issues, and proposals to close or consolidate schools must satisfy the criteria laid out in all three tiers, Cruz said. The superintendent expects normal staff attrition to make layoffs unnecessary as schools are reconfigured.

AISD Operations Officer Matias Segura described the plan, previewed to reporters on Friday afternoon, as a “roadmap” that will lead to “a detailed plan that lays [out] our every interim step” between now and August 2020. “Our goal is to come up several levels and look at all of our assets across the entire district,” Segura said, taking into account not only AISD’s own data and projections, but also actions under consideration by city and county governments. Once these data points are compiled, district staff will assemble different “scenarios” for the board to consider. Each scenario would be tested against “guiding principles” – such as consolidations being distributed equitably across the district – until final recommendations are presented to the board for approval in June.

Segura noted that it would be “unlikely” that schools currently being modernized with 2017 bond projects will be slated for closure, since the district will assess those facilities based on their post-upgrade conditions. However, Segura said, the bond language does allow the district to repurpose funds to other projects if one of those schools was selected for closure or consolidation. The Community Bond Oversight Committee – established as a way for citizens to make sure bond projects are completed on time and according to the voter-approved bond language – would recommend to the board how those dollars should be redirected.

District leaders realize they and the board will undoubtedly face political resistance once the process identifies specific schools to be impacted. But in the current atmosphere of fiscal crisis, they see no alternative. “When we look at the amount of money going toward recapture, the student enrollment that has dropped over time, the expectations around student learning that are different today,” Cruz explained, “all of that contextualizes our decision-making.”

Given how much AISD has struggled with stakeholders this school year over simply renaming schools (whose namesakes served the Confederacy), the district knows it will need robust community engagement to complement the data collected to conduct the three tiers of analysis. AISD Communications Chief Reyne Telles said involved stakeholders will include area elected officials, realtor groups, staff, and campus advisory councils, among others.

Board President Geronimo Rodriguez said the plan was “part of the journey” the board is now on as it faces “difficult budget choices,” and that the process would “provide opportunities to set our sights on the future and invest educational dollars toward student outcomes.” While Rodriguez acknowledged the district’s fiscal crisis, he said the plan should “not be about urgency,” but rather that conversations going forward should focus on “our values and on student outcomes.” Doing so will allow AISD to be “proactive” in determining the future of its schools, he concluded. “I’m confident the board will make the right decisions.”