Eulogies and memories at Saengerrunde Hall

Friends and family gathered Tuesday evening, Jan. 22, at Saengerrunde Hall to honor and memorialize the late Nadine Eckhardt, who died in Austin Dec. 8, at 87. “Those of you … who were touched by Nadine,” said Curtis Graves, “you will never forget her.” 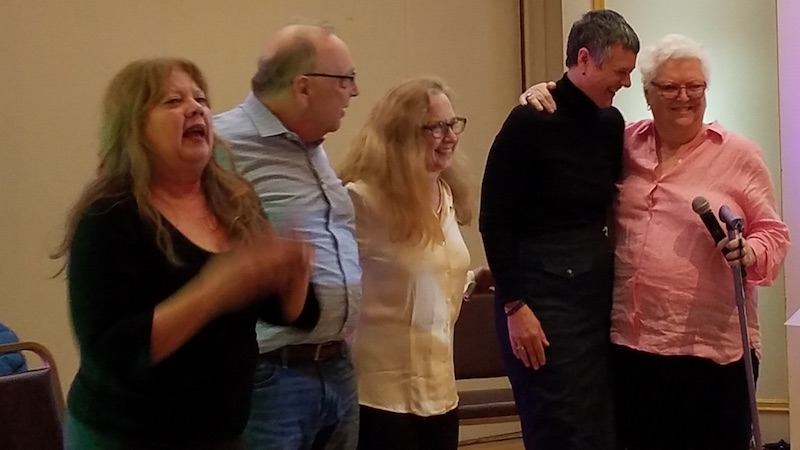 If there was a running theme throughout the evening of eulogies by Nadine’s many friends, it was Nadine as “connector” – the word used by Katherine DeFoyd in recalling how Nadine brought people of all sorts and backgrounds together, and not only the 100 or so people on hand this evening. Those connected included, in a way, even DeFoyd and her husband of 30 years. DeFoyd recounted a memorable second date at the New York incarnation of Nadine’s Restaurant, where Nadine and two daughters – Sidney Brammer and Sarah Eckhardt (then managing the restaurant) – cheered on their friend’s romance, from the bar. DeFoyd’s husband later told her he was entranced, in part, because she knew “such interesting people.” Nadine also served as a political catalyst, encouraging DeFoyd’s successful organizing of a New York fundraiser for gubernatorial candidate Ann Richards.

DeFoyd described Nadine as a “charming, beautiful, amazing human,” who confirmed her conviction that “we’re all connected in this world.” The notion was reiterated throughout the several speakers who recalled their experiences with Nadine, and by the range of those experiences. The evening’s emcee, Patricia Mathis, threaded the speakers together with tales of her long-standing friendship with Nadine, ranging from learning the D.C. ropes together while Nadine and her first husband Billy Lee Brammer were working for Sen. Lyndon Baines Johnson, to serving pinto beans (or occasionally, marijuana brownies) to various official guests of her second husband, Congressman Bob Eckhardt. Throughout the evening, another theme was Nadine’s fearlessness and fierce independence, although Mathis noted to laughter that in the Fifties, “It was revolutionary for a young woman to go to work without a girdle.” 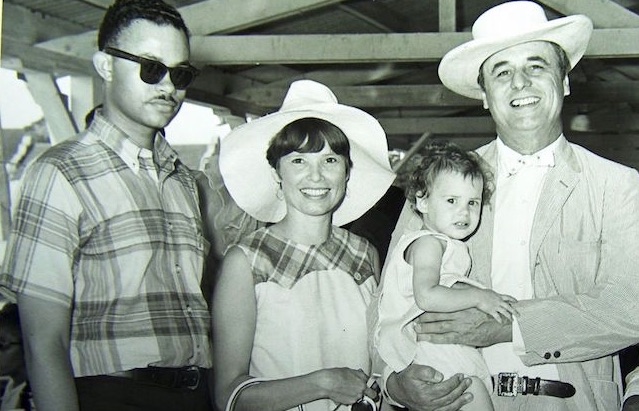 In 1966, Curtis Graves was the first African-American to be elected to the Texas Legislature since 1899. He campaigned alongside Eckhardt, who was running for Congress in a north Houston district that overlapped that of Graves. Graves recounted a couple of dramatic stories from that campaign, when he and Bob Eckhardt, Nadine, and then baby Sarah – aka “Pie,” as in “sweet as pie” – together visited black churches as well as VFW or Fraternal Order of Police strongholds, determined to meet every potential voter and in the bargain, face down racism. Graves’ tale, alternately comic and dramatic, at one point featured Bob and Nadine literally holding Graves down against reacting to racial invective – in order to make it possible that he would indeed win the Democratic primary and take his place in the Legislature.

The remarks of Jean Williams Barac (read by a friend, due to illness) recalled Nadine’s role as a “star” of neighboring Scholz Garten, amid the Fifties, “McCarthy Era” conversations that were engaged there. “The atmosphere might seem frivolous,” she said, “but the talk was not.” She also recalled Nadine’s “Audrey Hepburn, pixie-ish look,” and her lifelong determination to “follow her bliss.” Barac said Nadine was “just ahead of her time,” and she paid additional tribute to her children – Sidney, Shelby, Willie and Sarah, all in the audience – as “passionate, successful, awesome adults.”

Cecile “Cele” Keeper provided a comic memory of her first meeting with Nadine, after husband Billy Lee brought Cele home from a party to his (then separate) part of the house he was sharing with Nadine. The next morning, Nadine greeted her warmly, “Would you like some fresh orange juice?” Susan Streit Walker said meeting Nadine, in 1972, was “love at first sight” – and called her “a force of her own. … Nadine was no more the wife of Bob Eckhardt and Billy Lee Brammer than they were her husbands.” 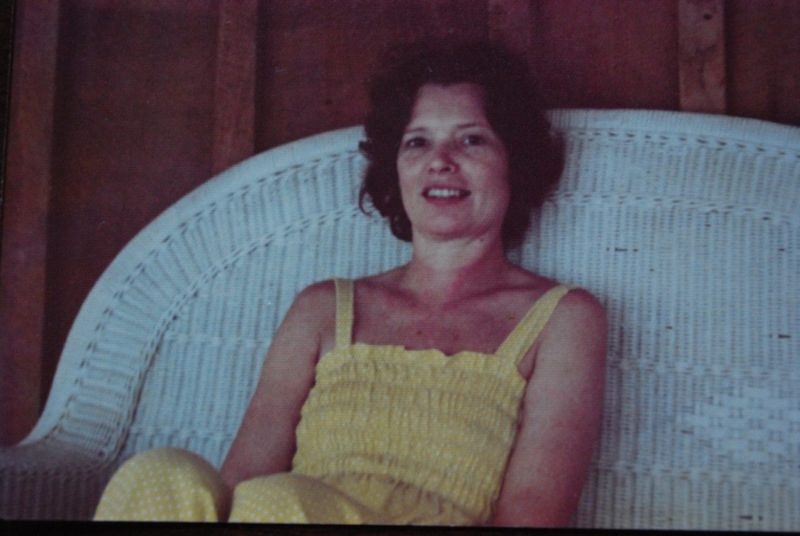 The memories and tributes continued. Gary Keith, Bob Eckhardt’s biographer, recalled interviewing Nadine, who acknowledged about her husbands (and other dalliances), “I was attracted to weirdness.” Jeff Nightbyrd, who arrived late and still wearing hospital wristbands following surgery, said Nadine was “bound for beauty.” He said she was instrumental in helping him and others establish KPFT, the Houston Pacifica radio station – and she was a “no sentimentality, nuts-and-bolts” person in doing that work.

An impromptu tale was provided by journalist and author Ellen Sweets, who had interviewed Nadine for her memoir/cookbook, Stirring it Up with Molly Ivins. Nadine offered Sweets some brownies to take home, with a warning not to eat them all at once. One sweet-tooth evening, Sweets forgot that warning, and recalled with a laugh, “I wasn’t right for two days! And now I never eat a brownie without remembering Nadine.”

In the evening’s final moments, Sidney, Shelby, Willie, and Sarah gathered with Mathis onstage for photographs and a final farewell before joining friends in the audience for more conversation. Everyone in the crowded room, it seemed, had once again been “touched by Nadine.” 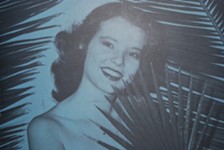 Farewell Nadine Eckhardt
Farewell to the Duchess of Palms