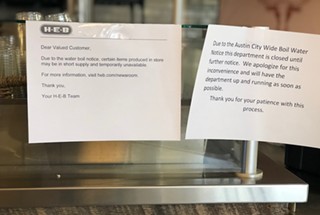 The boil water notice has forced many Austin businesses to curtail services. Here: a notice posted at the H-E-B Hancock Center deli counter.

While the water boil notice has so far been a precautionary measure, the city is now issuing an official notice as required by the Texas Commission on Environmental Quality regulatory orders. Up until now, Austin Water had not exceeded regulatory turbidity standards.

Turbidity – or water cloudiness – has no health effect on its own, but it can interfere with disinfection and provide a passage for microbial growth. The high turbidity was only a brief spike and the levels are now back to what they were yesterday. Despite the official TCEQ notice, the spike doesn’t require any changes to the precautionary measures already in place and does not put the public at additional risk, say city officials. Keep doing what you’re doing.

Meanwhile, city and county officials are providing extra water for those with special needs; who cannot boil water; or who need bottled water for work, at five distribution sites in the city. Supplies are limited to one gallon per person and up to four gallons for a family of four, city officials say. Pick up is located at the driveway entrance of the sites. Schools are providing water on site for students to use, as well. The distribution sites will operate from 7am to 7pm and are located at:

Amid mixed messages over how long Austin residents would need to boil water, city officials told residents the order could end “hopefully by this weekend” during a press conference at City Hall on Tuesday afternoon. There’s no indication this will be a “long-term issue,” and should be resolved in “days, not weeks,” said City Manager Spencer Cronk.

That optimism contradicted a more dire assessment from Travis County’s emergency management division earlier Tuesday morning at Commissioners Court. Why the conflicting reports? If you tell an emergency manager to plan for a five-day trip, he’ll pack a bag for 10 days, said Travis County officials during the press conference. While the county will continue to plan for a possible 10 to 14 day boil water notice, they expressed confidence in Austin Water’s shorter estimates.

Austin Water Director Greg Meszaros added that the utility’s estimate is contingent upon sufficiently refilling drinking water reservoirs and ensuring water quality. One variable that can’t be controlled, he warned, is the weather; expected rains tomorrow could set back that weekend goal, with a clearer picture of the impact by Thursday morning. He said Austin Water has seen lower demand, as the city urgently requested, over the last 24 hours; even though the city’s three treatment plants are operating at just a third of their usual capacity due to the nasty condition of their raw water inflows, drinking water production is still higher than consumption.

“That’s really, really positive,” said Meszaros, while stressing residents need to keep limiting water usage and boil water until further notice. Cronk and Mayor Steve Adler echoed the point, thanking the community but reminding us our work isn’t done just yet. Residents should call 311 if they see gross violations of water restrictions or have any nonemergency concerns.