New to Town? Here Are Nine of the Biggest News Stories Affecting Locals.

A primer on Austin politics

Greetings, young upstanding student, and welcome (back) to Austin, where you’re either re-acclimating to the increasing chaos of life in an ever-growing metropolis or getting your first taste of life in the little big city.

While there’s a natural dip to activity around this time of year, what with students being gone and others (including City Council) opting to use their vacation time to escape the heat, we’ve still managed to stay busy – with a population that’s pushing up on 1 million people, there’s always something going on.

To help you catch up, the Chronicle News team has assembled this handy guide for nine of the biggest stories the city’s facing right now, from elections to immigration to soccer. We hope that it can help you get up to speed. – Chase Hoffberger

We Are Austin: Your Vote Needed 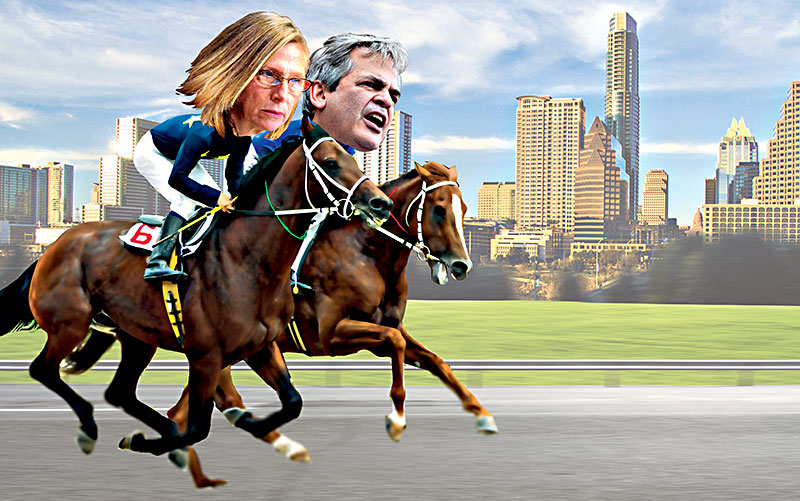 Austinites pride ourselves on our “participatory democracy” – meetings, hearings, and grassroots organizations out the wazoo – but as in much of the country, actual voting in city elections steadily declined in recent decades. In part to increase that turnout, a few years ago municipal elections were moved from May to November – with middling success, as the total ballots grew but some voters, familiar with the big names at the top of the ballot, still found it difficult to work their way down to the bottom. That’s where you find Travis County offices, City Council, school board, and often propositions where willing voters can actually have a direct effect on public policy.

Too few of us take the trouble to bone up on local candidates and choices. Your chance is coming Nov. 6, when what shapes up to be a historic national election is also an opportunity to choose a mayor, several Council members, and shape public policy. Consider this your early invitation. – Michael King 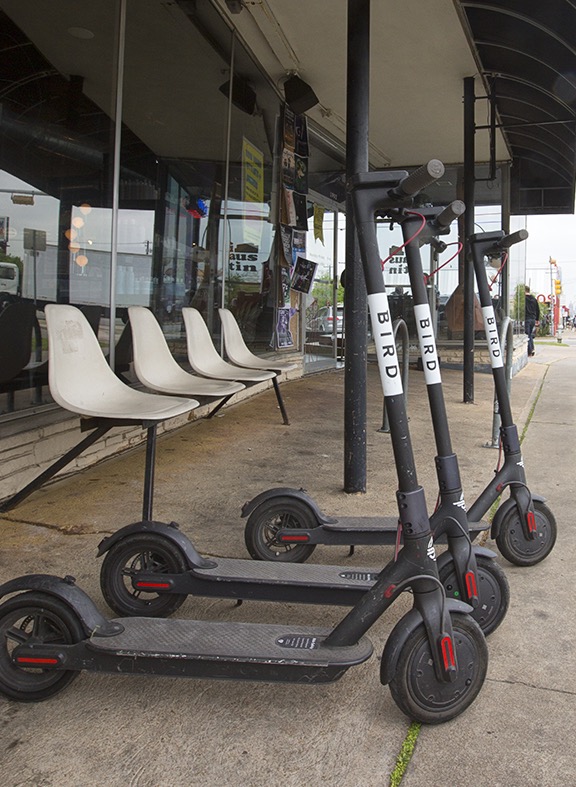 Scooters are so present in Downtown right now that it’s hard to remember that just this spring the Santa Monica scooter startup Bird was only just beginning to deploy its fleet onto Austin’s streets, flouting a tortoise-paced city regulation process, as per usual. The city eventually wrangled the company (and a couple copycats) into suspending operations until they could be bound by pilot rules. Emergency rules have been in effect since May – governing permitting, safety requirements, storage and parking standards, as well as city access to travel, incident, and injury data – but the city hopes to have permanent ones in place by October. Meanwhile, Austinites have settled neatly into two camps: people who love the new scooters, and those who like to bitch about those who do. – Nina Hernandez

Led by social justice advocate Greg Casar, City Council has spent the past couple of years making historic strides in ensuring workplace parity. In 2016, the city became the first in the South to pass a “fair chance” hiring ordinance meant to level the playing field for those with criminal histories. Council also upped the pay for subcontractors on city-funded projects to $13 per hour, a continuation of their decision the year prior to increase the minimum wage for all city employees. The latest effort to support workers’ rights is an ordinance requiring most businesses to allow employees up to 64 hours of paid sick leave annually. However, that rule is being held up in court as conservative, anti-union groups – plus our own state leaders – have sought to block it from taking effect. – Mary Tuma

When City Council decided to vote down its meet-and-confer agreement – a contract that allows modifications to how the city employs police officers under archaic state law – with the Austin Police Association, and the union declined to ink an interim deal, the city was left without such a deal for the first time in nearly 20 years. That’s brought an end to the Citizen Review Panel, which many in the activist community decried as feckless since its non-binding recommendations about critical incidents went largely ignored by the department. But the Office of the Police Monitor, and its new steward Farah Muscadin, are still standing, despite the union’s best effort, and Muscadin along with a group of stakeholders from both APD and the community at large are working on an overhaul of the old system. – Nina Hernandez 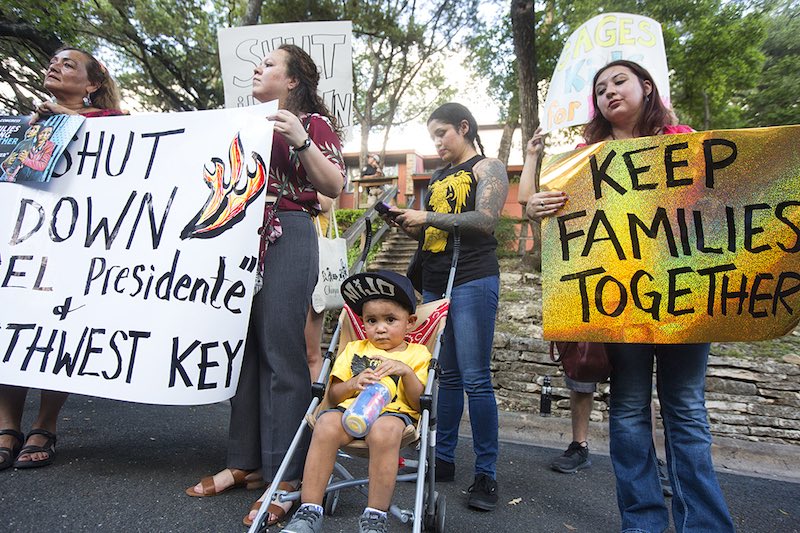 Demonstrators protest in June outside the Northeast Austin home of Juan Sanchez, CEO of Southwest Key. (photo by Jana Birchum)

The federal attacks on immigration hit home last February when ICE raided Austin and arrested several undocumented immigrants, most of whom had no criminal records, instilling fear into the local community. Our anti-immigrant state Legislature contributed to that fear with Senate Bill 4, a measure that seeks to punish so-called “sanctuary cities.” The bigoted law tied the hands of local authorities, notably Travis County Sheriff Sally Hernandez, who previously stood firm in limiting ICE detainers. To support the local immigrant community, City Council heavily invested in immigrant legal services and are in the process of considering an Office of Immigrant Affairs. Recently, Trump’s now-rescinded family separation policy became a point of local contention as Eastside nonprofit Southwest Key housed many of the children torn apart from their parents in federal migrant youth centers in Texas and elsewhere, sparking calls to boycott the nonprofit. – Mary Tuma

Are You Ready for Some … Fútbol? 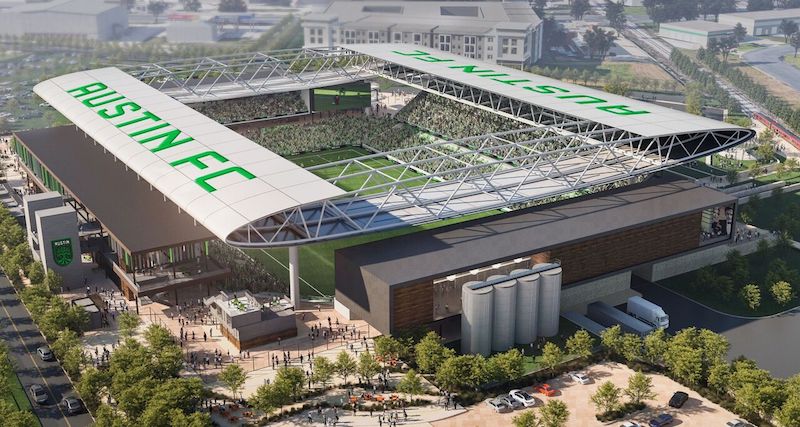 The proposed stadium at McKalla Place

Anthony Precourt hopes so, because after a process that began in October of 2017, the Precourt Sports Ventures CEO is closer than ever to moving his Major League Soccer team, the Columbus Crew, to Austin. The team would become the Austin FC, and their arrival would bring an end to a political saga that has generated far more excitement than many in the city anticipated.

After having his first two desired sites (Butler Shores and Roy G. Guerrero Park) rejected, Precourt settled on a vacant lot in North Austin near the Domain. McKalla Place suddenly became the hottest piece of property in the city’s portfolio. Precourt revealed a site plan for McKalla in May, and in early June, he made an offer to the city, to which City Council said, “not bad, but keep trying.”

Meanwhile, other developers showed interest in utilizing the McKalla site for decidedly non-soccer means. But city staff and Precourt continued their dance, agreeing on a set of terms in early August. It only took a little more arm-wringing for City Council to reach a tentative deal with PSV, and two weeks ago, City Manager Spencer Cronk was authorized to execute the deal to bring home a privately-financed, 20,000-seat soccer stadium.

Just one problem: An unsettled lawsuit in Ohio could prevent Precourt from moving his team at all. If that happens, well, at least we can say we tried to #GrowTheLegend. – Austin Sanders

Trouble at the Crime Lab

The city, county, and a whole slew of law enforcement officials are currently being sued by eight sexual assault survivors who claim the criminal justice system – from street cops to the Travis County District Attorney’s office – fail rape victims at every turn. The original proposed class action suit was filed in June by three local survivors, and five more women have since added their stories. (According to the plaintiffs’ lawyers more than 40 women reached out after the initial filing.) The class action suit is the latest headline regarding the Austin Police Department’s handling of rape cases. In the summer of 2016, APD shuttered its forensics lab after receiving a scathing audit from the Texas Forensic Science Com­mis­sion, which identified a long list of issues including the use of outdated testing procedures and clear signs of contaminated evidence. Though the closure slowed DNA testing for numerous cases, the most egregious delay fell on the department’s already massive backlog of untested rape kits (by March of 2017, over 4,000 kits were untested). In the last year, however, progress has been made and the number of kits awaiting testing has technically reached zero – though advocates (and the lawsuit’s plaintiffs) worry they’ve simply been moved to labs where they’re still awaiting testing. City and county stakeholders are still working toward a DNA lab resolution. – Sarah Marloff 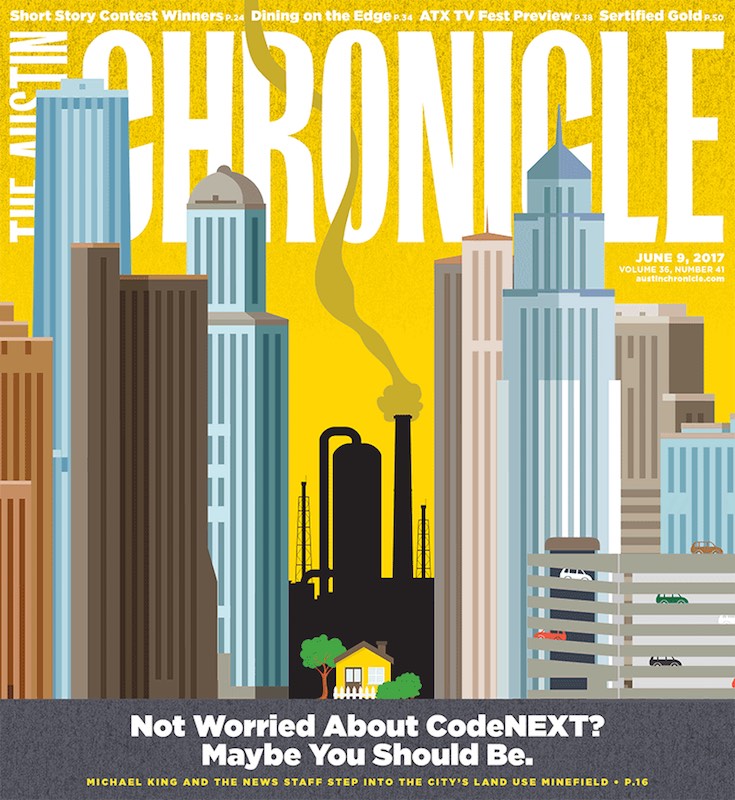 CodeNEXT (or Its Wreckage)

Land use is a contentious issue in Austin. The city spent the past six years and more than $8 million rewriting the city’s land development code, which dictates what can be built where within city limits. CodeNEXT, the proposed rewrite, was intended to replace today’s outdated, 30-year-old code, but the project went off the rails almost as soon as it started. By the time the first draft was released in early 2017, city commissioners, stakeholders, and residents were rumbling with discontent, and the divide grew larger with each draft. One faction of the city demanded more neighborhood preservation, while others called for increased housing density. In the last six months, several lawsuits were filed by anti-CodeNEXT groups in an effort to undermine the project. Mayor Steve Adler and much of City Council tried to move forward with the rewrite when they began deliberation in June, but by August the decision was unanimous: Pull the plug on CodeNEXT and start over. What “start over” means, however, has yet to be determined. – Sarah Marloff

The Austin Independent School District has had an eventful summer. In May, Kendall Pace stepped down as president of the school board and resigned her at-large seat after a texting scandal involving a controversial state grant. And in June, the board passed a $1.4 billion budget that would force the district to spend $30 million from its savings account. A budget stabilization task force was convened to find ways to prevent a budgetary crisis. Meanwhile, the district continued planning construction projects intended to modernize older campuses, paid for through funds from the $1 billion bond package approved by voters in 2017. As the summer drew to a close, the Texas Education Agency gave AISD a B rating, while five of the district’s 130 campuses received failing grades. A week later, as classes began at Mendez Middle School – one of the failing schools – a new plan to turn around student performance and save the campus from closure was put into action. – Austin Sanders 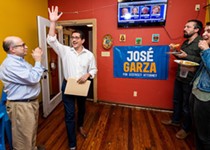