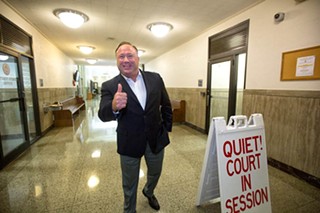 Alex Jones last April at the Travis County courthouse for an entirely different legal matter, pertaining to the custody of his children. Jones wasn't in court this week, but on Wednesday and Thursday attorneys on his behalf sought to dismiss defamation cases against him. (Photo by Jana Birchum)

Fake news, real consequences. Parents of a 6-year-old killed in the 2012 Sandy Hook shooting received death threats after being featured on Alex Jones’ conspiracy theory show “Infowars,” and a Boston man says he struggled with panic attacks after his picture was featured on Infowars’ website in February claiming that he was the Parkland high school shooter. Their attorney Mark Bankston told their stories this week before Scott Jenkins’ 53rd District Court, where he is suing Jones for defamation on their behalf.

Jones has two attorneys, one for each of the cases. They’ve both sought to dismiss the defamation claims, two out of five that the Austin crackpot faces at a time that major online platforms like Facebook, YouTube, and Spotify have started to act against some of his content. On Wednesday, attorney Mark Enoch stressed that Jones’ broadcast could be seen as “fringe speech,” or even “dangerous speech,” but not as defamatory because it uses “rhetorical hyperbole” and constitutes “political commentary,” which is protected. He said his client acknowledges the parents’ loss and waives his right to attorney fees.

But in the April 2017 Infowars episode “Sandy Hook vampires exposed,” on which the lawsuit is based, Jones talks about a CNN interview with one of the parents and alleges it is filmed against a green screen and not on the actual location. Bankston argued that this implied (by Jones) that the parents participated in some way in a supposed hoax around the shooting, a “monstrously stupid allegation.” Bankston said his clients’ goal is not to simply “Shut off Mr. Jones because we don’t like him” but rather because “we cannot allow these reckless lies to continue." Speaking with reporters after the hearing, he continued: "There’s nothing that he does that should be constitutionally protected.” He emphasized the harassment the parents were experiencing by Jones’ fans, which forced them to move houses seven times since the incident.

Back in court on Thursday, Jones’ second lawyer Eric Taube sought to have the Parkland-related case dismissed – or at least have Jones removed from it – on account of there being no evidence that Jones himself was responsible for the posting, which was made by Kit Daniels, a writer for Infowars.com. Bankston responded that the article had “Alex Jones’ fingerprints all over it.” He said that his client feared for his life after his picture had been featured and suffered emotional distress.

The two hearings were just part of a lengthy pre-trial period that Bankston hopes will continue – with Jenkins’ rejection of the two motions – until a proper trial: Bankston’s goal is for that to begin by the end of next year. Jenkins has 30 days to rule on the motions. The defendant, meanwhile, commented on the lawsuits in a YouTube video published on Thursday, saying it was “an honor” to be persecuted “by the globalists.” 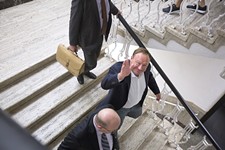 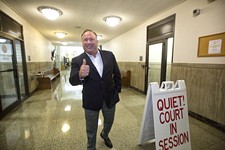 Bus Stops and Court Benches
On immigration in McAllen