Mayor Calls for End to CodeNEXT Mayor Steve Adler in June, when CodeNEXT first came to City Council. The mayor outfitted colleagues in Team Austin vests that day to emphasize unity along the dais. (Photo by John Anderson)

Mayor Steve Adler dropped an $8 million bombshell on CodeNEXT Wednesday afternoon with a post to City Council‘s online message board. In a long statement, in which Adler called the land use code rewrite process “so divisive and poisoned,” he asked his colleagues to consider killing CodeNEXT and directing City Manager Spencer Cronk to help create a new process that “will help us move forward together.“

The full contents of Adler’s forum post are below. We’re in the middle of Wednesday production at the moment. See this week’s issue, on newsstands tomorrow morning, for more on CodeNEXT, or what’s left of it.

Austin’s biggest challenges, such as increasing unaffordability, displacement, gentrification, flooding, and traffic are getting worse. The land development code should be an important tool to help with these challenges, however, our current code is not serving us well. The need to revise this land development code is greater than ever before. Yet, it is becoming increasingly apparent that the CodeNEXT process, so divisive and poisoned, will not get us to a better place.

We should consider the option: cease the CodeNEXT process and ask the City Manager to create a new process that will help us move forward together.

In 2012, the Austin City Council under the old, at-large system, initiated a comprehensive planning process which resulted in the adoption of Imagine Austin, a document intended to guide the growth of our city. Imagine Austin identified rewriting the land development code as a priority because of how important the code is to the day-in-day-out growth and development of our city and to realizing our vision for the future. When we look at the difficult issues of displacement and gentrification, the burdens of traffic and increasing lack of affordability, it is not incorrect to point at least one finger at our existing, outdated land development code.

We must improve on what’s happening now. We can't keep losing long-time residents because they can't afford to stay in their neighborhoods. We can't keep letting our city's floodwaters go inadequately managed, washing away lives and homes and costing our city hundreds of millions of dollars and untold misery for primarily lower-income residents. Our city is changing, and we have to make strides in better managing that change. We must address the challenges we feel today and those we anticipate for tomorrow or we'll lose what makes our city special.

I'm proud of the 10-1 council for its work on traffic, housing, affordability, displacement, gentrification, equity, and sustainability. Together, we have made great strides. Cities everywhere are always going to grapple with such issues. Whether a city is growing or shrinking, the problems don't completely go away -- they just look different and continually need to be addressed with newer and more innovative solutions.

We have not, however, been able to accomplish the necessary re-write of our land development code and that limits the benefits we can achieve. The previous at-large council selected our CodeNEXT consultant, Opticos, in March of 2013. That same council then selected the approach, referred to as "The Deep Clean" of the code, in November of 2014. By the time the new 10-1 council was sworn in, the CodeNEXT process was already almost two years old. We elected to continue the process.

Now, however, we need to consider if we have made a wrong turn in how we’ve gone about trying to do this. CodeNEXT, the current process of rewriting our land development code, is big, complicated, technical, and it's largely misunderstood. The six-year process that got us to this point has had to deal with changes in city staff and leadership, the political landscape, our economy, technology, and our municipal governing systems and philosophy. Maybe we pushed too hard and too fast? Maybe we took too long? Regardless, our challenges remain and they are getting worse every day. One of the biggest impediments to helping our city, our land development code, remains outdated and deficient.

We had been hoping for a process that would bring Austin together and result in a code that would help us solve many of our biggest challenges, however CodeNEXT and the community discussion surrounding it have largely been contentious and marked with misinformation. Preying on the worst fears of Austinites is a near surefire way to kill anything, but we know that that our city’s challenges and the need to re-write our land development code remain.

Colleagues, I believe we should consider if the best way ultimately to find the right path to fix our land development code is to cease our current process and ask the City Manager to create a new process. While we have learned much and made gains as a council in our June work sessions, it seems evident that we’re not going to get to a place of sufficient consensus. Do we believe that continuing to chop at the same wood is going to change the outcome?

This is a good time to consider if we are on the right path. When June ended, the Council realized that to proceed in a meaningful way we needed to run new numbers on housing capacity so that we could advance discussions on transitions and compatibility. We recognized we needed more testing on the impact of the non-zoning sections on the housing capacity we intended to get on corridors. Staff has now informed us they cannot provide answers to these questions by the end of August as we had hoped. Further, we now learn that floodplains may be changing in a very significant way and this alone might justify recalculating and considering new changes to our land development code in order to achieve the goals we seek.

It’s time to evaluate where we are. Is the current process so poisoned that we need a new and different approach that encourages openness, discussion, and finding the truth, rather than the misinformation, hyperbole, fearmongering, and divisive rhetoric we have seen? When a long-time resident says with a straight face that CodeNEXT means every property in their neighborhood will be able to sell alcohol commercially, or a neighborhood listserv warns that most every home in their neighborhood will be demolished and each lot subdivided into 25-foot widths, then something has gone horribly wrong. I keep hearing from too many people that the CodeNEXT process is being pushed by greedy developers intent only on making money from the misfortune of others. But all we need to do is listen to Council Members Casar, Garza, and others to know that this is untrue. I keep hearing from yet others that the folks opposing CodeNEXT are all racists intent on keeping people of color out of their neighborhoods. But all we need to do is listen to Mayor Pro Tem Tovo, Council Member Alter, and others to know that this, too, is untrue.

I’m not sure it is within our power and ability to right the current process. We must do a better job of calling out those that seek advantage and power at the expense of the well-being of our city. They are hurting our city, not helping, and re-living the battles of the past isn’t saving homes from being demolished or keeping people from being displaced – it’s exacerbating and prolonging such tragedies. Oversight, engagement, and transparency are core values of our city, but when people stop being honest to achieve a political end, it hurts our city and our democracy. We need dialogue that is more like Austin, Texas, and less like what we are seeing in Washington D.C.

Change happens at the speed of trust. As a Council, city staff and community, we must restore trust in a process to revise our land development code, and that means we need a new and different, clear and concise path that can move us forward. We need to assess where we are and task City Manager Cronk with evaluating all the good we have gotten from all the work done thus far, and then recommending a new process that builds on the lessons learned from what we’ve done, both good and bad.

There are a lot of people, working in good faith, that have spent a lot of time on this effort, including our city staff. We have learned a lot, narrowed and identified issues, and our community has shown general agreement on some important elements. We have developed ways in which we can significantly enhance environmental protections and mobility choices, among other non-zoning benefits. Many hours of work have helped us better understand our housing needs. We have accomplished these and more and we move forward with significant value in hand.

I now question, however, whether our current process can see us to the end. Before we continue further down the path we are on, I recommend we stop to see if it will really get us to where we need and want to go. In this regard, I remain committed as I have throughout my term as Mayor to finding ways to slow or mitigate gentrification, to stop displacement of long-time residents, to preserve existing housing stock, to support our music and arts community and low and moderate income residents through affordability measures, to find ways to help Austinites who live here and to plan for those we know are coming, all without losing what has always made our city special and continuing to lead on sustainability measures that keep us healthy and safe.

We must get this right and I continue to believe we can. We must deliver for our constituents and our city’s future.

I look forward to hearing from you. 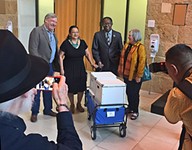