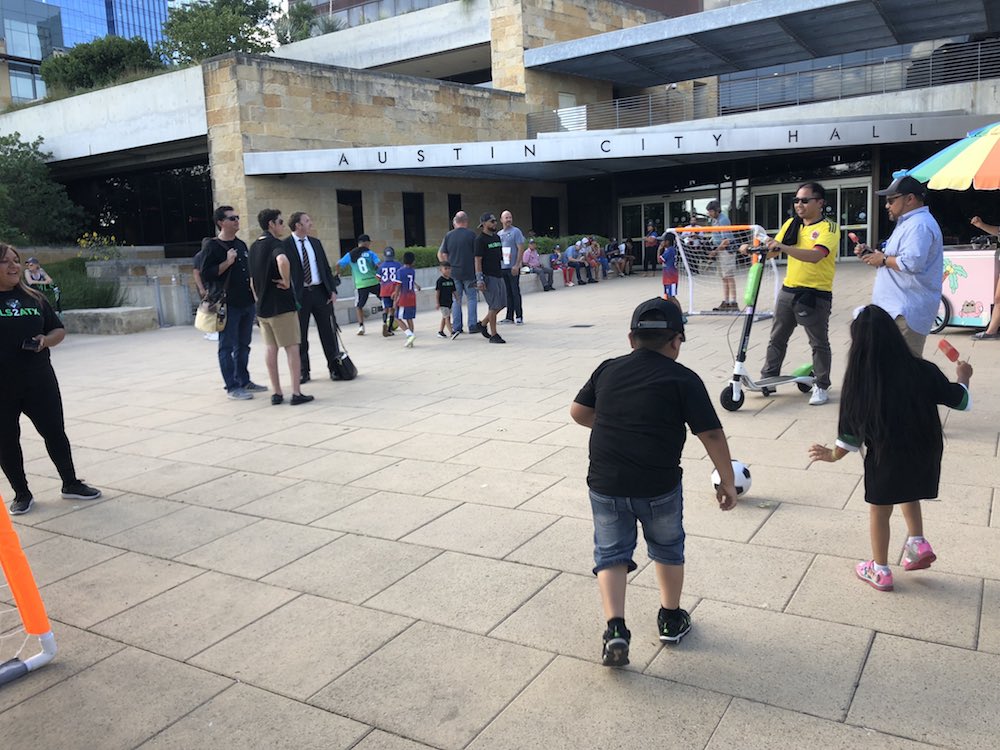 MLS in Austin supporters gather outside of City Hall. (photo by Austin Sanders)

The 9-0 vote (with Council members Ellen Troxclair and Ora Houston off the dais) marked Council’s most substantive action taken in the eight-month saga that could result in Major League Soccer coming to Austin. Council also approved by an 8-1-1 vote (Pio Renteria against, Delia Garza abstaining, and Troxclair off the dais) a resolution directing Cronk to “announce that the city will receive plans for development” at McKalla Place – PSV’s desired site for a new stadium – which will allow developers to submit their own ideas for what to do with the 24-acre vacant lot. Both resolutions will require Cronk to report back to Council on August 9. A third item authorizing the city to hire Greenberg Traurig, LLP for legal services relating to the soccer stadium deal was approved 9-0 (with Houston and Troxclair absent for the vote).

Item 130 tasks Cronk with scrutinizing PSV’s “financial soundness” and drawing up a contract that minimizes the use of city funds and the loss of revenues stemming from “unknown and unexpected costs.” PSV would also be asked to fully fund a MetroRail station at the site (estimated by Capital Metro to cost $13 million) and to create a program in which “event tickets” would give Cap Metro riders free access for the day of the event. PSV would reimburse the transit authority for the cost of that program.The resolution also instructs Cronk to work out a provision in the deal that would impose “financial penalties” on PSV and MLS should they seek to relocate the team after making Austin its new home. Crucially, an Ohio law – known as the Modell Law (see “At Court With Precourt,” April 27) – seeks to achieve the same goal. Last week, an Ohio appeals court ruled that a suit brought by the state’s attorney general invoking the law could proceed, possibly making Friday morning’s vote moot in the end. 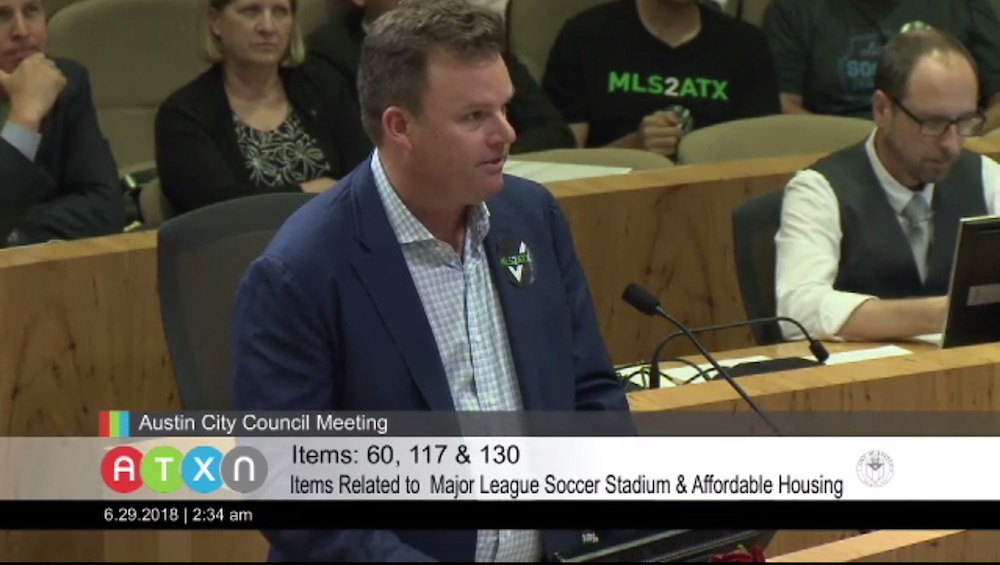 Initially seen by stadium supporters as a roadblock, District 7 CM Leslie Pool’s item 60 was amended to be more palatable to pro-stadium council members. Instead of soliciting proposals, the resolution asks Cronk to set up a process in which his office would “receive” plans for “professional sports stadiums” and mixed-use developments that promote affordable housing, open space, and include a fully funded MetroRail station. The resolution asks Cronk to create a process that treats both types of plans equitably “in terms of timeline, access, or other process-related considerations.” At least two such mixed-use development plans exist and could be submitted to the city manager.

PSV’s Austin lobbyist Richard Suttle left the marathon meeting feeling energized about his client’s prospects, but acknowledged it would take a monumental lift to create a deal appealing to everyone on the dais by August 9. “It’s a very complicated deal,” Suttle said. But he noted that “[soccer] is a unifying sport, this is a unifying project, and my personal goal is to get a unified Council on it.”

Look for more in next week’s issue.