Now what are we going to do about all these tote bags we have been gifted?

The Texas Supreme Court struck down the city of Laredo’s ban on plastic bags today, in a decision that will likely affect Austin’s own (popular and effective) ordinance, after five-plus years in operation. Justices ruled unanimously that a state law (1993’s Solid Waste Disposal Act) prohibiting municipalities from restricting the use of plastic bags overrode local ordinances that forbid the retail provision of single-use bags at the point of sale, following a lawsuit filed by the Laredo Merchants Association against that city. While Friday’s ruling doesn’t cite Austin specifically, its order is broad enough to implicate Austin’s (and those of other cities throughout Texas) as being quite endangered moving forward.

Further evidence of the local ordinance’s shaky footing emerged quickly after the high court’s ruling, when Texas Attorney General Ken Paxton emerged from his polluted cave to “commend” the court “for upholding the principle that no one is exempted from the rule of law.

“This ruling sends the unambiguous message to all local jurisdictions in Texas that they do not get to simply ignore laws they don’t agree with,” Paxton continued. “I hope that Laredo, Austin, and any other jurisdictions that have enacted illegal bag bans will take note and voluntarily bring their ordinances into compliance with state law. Should they decline to do so, I expect the ruling will be used to invalidate any other illegal bag bans statewide.”

Wonderful. The Texas Hammer strikes again. Following the ruling, Environment Texas Executive Director Luke Metzger noted that while the ruling should set precedent to do away with Austin’s ordinance, “major retailers, like HEB and Wal-Mart,” can “continue observing the ban,” and ask the Legislature to remove the preemption statute” – or at the very least encourage shoppers to continue toting their totes. 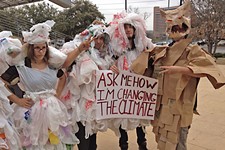