Martin Luecke's "Campaign to Save Humanity" 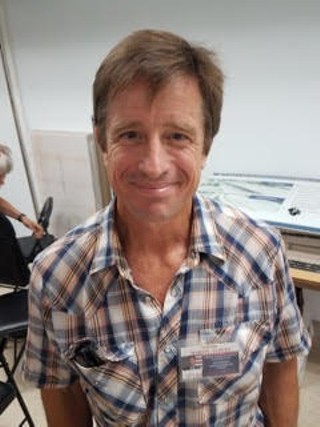 “If we don’t do something within a generation, it’s over.”

That’s the message borne by Martin Luecke, the latest potential entrant in the November Congressional campaign for District 25 – currently held by Republican incumbent Roger Williams, to be challenged by Democratic nominee Julie Oliver. (There’s also a Libertarian Party candidate, Desarae Lindsey.) An Austin “handyman” (with previous careers in TV journalism and ambulance services), Luecke, 56, says neither party is adequately responding to the global warming crisis – the imminent threat of “abrupt climate change,” he reiterates – and that’s why he’s running as an independent in a “Campaign to Save Humanity.”

“The number one priority is to make people aware of the real danger: planetary extinction.” For a brief interview at Hank’s cafe in his Windsor Park neighborhood, Luecke came armed with a dozen books – Noam Chomsky to Elizabeth Kolbert – and pressed his argument that neither Republicans nor Democrats are responding adequately to the imminent climate crisis. “Somebody has to do something to make a clarion call,” he said. “If we continue on the path we’re on, our great-great-great-grandchildren will probably be the last humans on Earth.”

Luecke dismisses any hope from GOP incumbent Williams (who has shown no interest in environmental matters), and likewise considers Democratic nominee Oliver insufficient to the political task. He argues that District 25 is so radically gerrymandered, “a Democrat can’t win,” and that in his door-to-door campaign he’s found that “people are ready to jump out of old parties, and want an independent candidate.” He adds that “health care is [Oliver’s] priority, but the threat of extinction trumps every other issue that there is, tenfold.” That urgency, he says, also trumps the argument that his candidacy will largely appeal to progressive voters and thus only help Williams.

While Luecke’s emphasis is most urgently on climate change – abandoning fossil fuels, building a renewable energy grid, and employing millions of people in renewables – he also advocates for major new infrastructure, universal health care, mass transit, and public financing of elections. The whole list (“24 policy ideas”) is available on his website: www.luecke4congress.org.

On another front – in a letter to the Chronicle last year (Aug. 28), he defended Alex Jones and his groundless conspiracy theories about both 9/11 and the Sandy Hook school massacre; asked about it now, he described his letter as indefensible and “goofy.”

Luecke is not yet an official candidate – he is working to gather 500 supporting signatures from people who did not vote in either primary in order to make the ballot. “Generally, at every other house I find people who didn’t vote in the primary, and almost all of them are willing to sign for me,” he said.

Once he makes the ballot, Luecke says, he will visit every county in CD 25 to alert media and the voters to the threat of global climate change and extinction. “If you educate people,” he says, “then they will make decisions to make things better.” His most immediate task is to get those signatures by his June 21 deadline. To supplement his blockwalking, Luecke will be holding a “Signature Campaign Party” on Sat., June 16, 3pm, at Knomad Bar (1213 Corona).