The suit, as expected, asks a Travis County court to order the dais to place the controversial CodeNEXT petition on November’s election ballot. 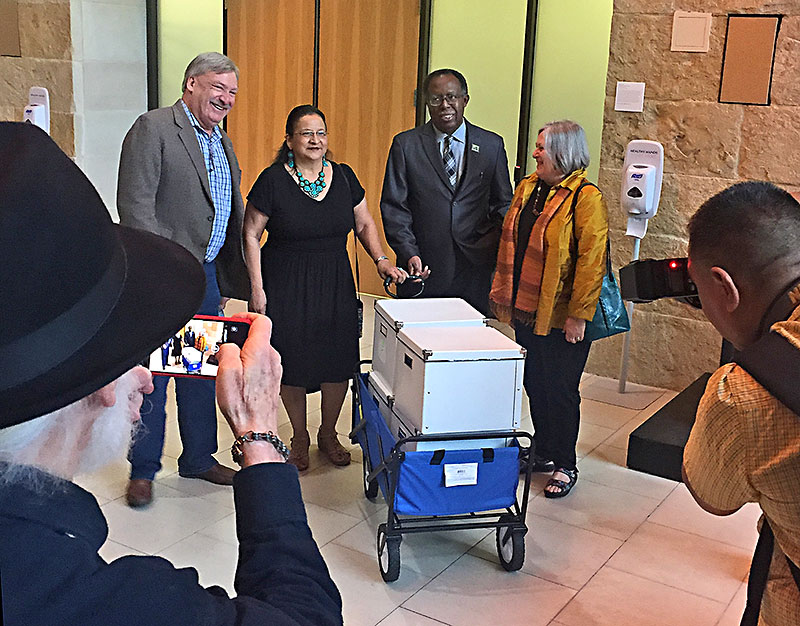 Fred Lewis, Susana Almanza, Nelson Linder, and Mary Ingle at City Hall in March with a reported 32,000 signatures on the petition to demand CodeNEXT be put to a public vote (Photo by Sarah Marloff)

The lawsuit follows Council’s 6-4 vote to not put Community Not Commodity petition – calling for a waiting period and public vote on CodeNEXT and all future comprehensive zoning rewrites – to a public vote. Members who voted against the petition’s placement on the November ballot did so in part to force a lawsuit like this one, so that a judge could rule on the legality of the petition. Mayor Steve Adler and the City Attorney’s office both hold that the state only allows two zoning issues to be put to public vote: whether to have zoning in a city or whether to remove zoning from a city.

The six-page suit is rather straightforward, arguing that the issue at hand is a “matter of law” and discovery is not required, as “no facts are in dispute.” It cites the city’s power of self-government, which grants residents “full legislative power to legislate directly by initiative and referendum except for the subjects of appropriating money or levying taxes.” Because of this, the suit alleges, “Texas Courts generally do not allow city councils to interfere in the initiative lawmaking process, which is the people’s exercise of direct democracy where their elected officials have failed to act.”

As promised, the plaintiffs have asked for an expedited hearing in order to meet the Aug. 20 deadline for it to be considered in time to potentially put the petition on the fall election. In an email, Lewis wrote that he hopes, with the city’s cooperation, a trial court hearing will be scheduled some time this month.