Analysis and proposal suggest viable future for team in Austin 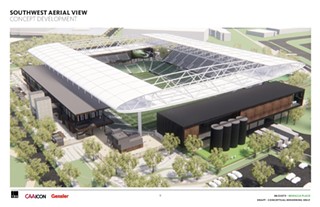 A Gensler rendering of a potential stadium for McKalla Place, from the southwest

The report considered access to the site through a variety of transportation options (including the potential addition of two MetroRapid lines along Burnet, in addition to the already speculated MetroRail stop), roughly $15 million in infrastructure redevelopment costs, and an opportunity cost comparison with a generalized mixed-use development.

Just hours after the city released its report, Precourt Sports Ventures dropped a 189-page proposal for bringing the Columbus Crew to Austin. Some of the material covered has already been detailed (like how the $200 million stadium would be privately financed by PSV, and how $354 million is expected to be delivered to the city), but some interesting revelations include a partnership with Foundation Communities to invest a total of $4.8 million into affordable housing throughout Austin, over 25 years. An upfront investment of $500,000 would go toward building a development near McKalla Place.

Other noteworthy details: The city will retain ownership of the land and the stadium will be donated to the city upon completion; because the city would own the stadium, it would be exempt from property taxes. PSV would pay an annual rent of $1 for the land, but would be responsible for all utility costs at the stadium site.

But at 189 pages there’s plenty more to dig into in the report. Look for more in Thursday’s issue. 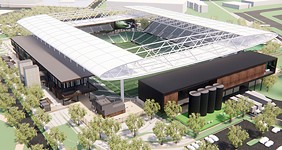