Kendall Pace Resigns From AISD Board

President and at-large member announces departure from both posts

Austin Independent School District Board of Trustees President Kendall Pace resigned from her at-large seat and as president of the board on Monday, effective immediately. Pace’s resignation comes just days after Education Austin, the district’s teachers’ union, called for her to step down amid controversy surrounding text messages she sent to fellow Board Trustee Julie Cowan. In the messages, Pace referred to “crazy ignorant community activists” and “poverty pimps” in discussing a grant opportunity from the Texas Education Agency known as the Transformation Zone Program.

Pace originally agreed to vacate the presidency in June, but on Monday announced plans to leave the board altogether, and apologized for “the crudeness in the discourse.” She highlighted her work advocating for black and brown students at AISD schools, and said that she had told her board colleagues she planned to step down as president over clashes with district administration, before the texts were released. Still, Pace characterized the texts as a “stream of consciousness rant” resulting from a frustration shared by the board and parents concerning an inability to address student inequity across the district.

Trustees will elect a new board president tonight at their weekly meeting, but it is unclear at this point if the remaining trustees will appoint someone to fill Pace’s vacated seat, or if they’ll agree to leave it unattended. Pace was up for re-election in November.

More in this week’s issue. 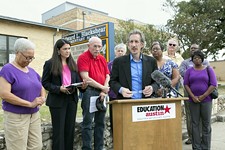