Help on the Way in Fight for Sick Pay 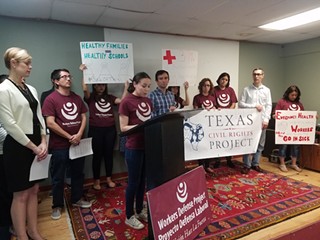 Italian restaurant L’oca d’oro, a local electrician, and the Workers Defense Project have joined the city in its legal defense of the city’s paid sick leave ordinance. The troupe’s attorneys at the Texas Civil Rights Project intervened in the lawsuit against the measure and filed a separate motion to scrap the suit altogether. (Both are available online here.) In April, groups including the Texas Association of Business claimed the ordinance, set to take effect Oct. 1, violates the Texas Minimum Wage Act by requiring that business owners provide employees up to eight paid sick days (or 64 hours) annually. The new defendants argue that the minimum wage law only applies to the amount of wages that can be mandated in Texas, not sick leave policies or “any other employment benefits whatsoever.”

“As an electrician, I am a small part of the hundreds of thousands of workers who are building this city,” said Joe Hernandez, the electrician, during a press conference last week. “Yet, nearly a quarter of a million of us still live with the fear of losing a whole day of pay if we fall sick or need to care for a family member.” L’oca d’oro co-owner Adam Orman said his restaurant instituted a paid sick leave policy nine months ago: “It’s important to us to be a part of this litigation to make sure that our work, City Council’s work, and the work of the multitude of other small businesses that were instrumental in crafting the ordinance does not get overturned by a coalition of businesses that want to provide as few rights as possible and as low wages as possible to their employees.”

The Workers Defense Project notes how special interests are backing the effort to sideline the ordinance. For instance, named plaintiffs the National Federation of Independent Business is a lobbying group largely funded by Freedom Partners, a conservative nonprofit subsidized by the Koch Brothers and made up of a board with either present or former Koch Industries employees. While the NFIB claims to back small businesses, they’ve historically lobbied for policies that benefit the wealthy.