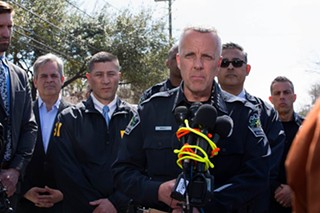 Interim Police Chief Brian Manley at a press conference after the third bombing, on March 12 (Photo by Jana Birchum)

City Manager Spencer Cronk is expected to hold a press conference today to announce that Brian Manley is the only finalist being considered for the vacancy of chief of the Austin Police Department. Cronk will put Manley before a community input process, and decide whether to remove the interim label after that.

Manley has been interim chief since November of 2016. He’s been a discussed candidate to permanently replace the previous chief, Art Acevedo, as a local boy and longtime Austin cop who previously served as Acevedo’s chief of staff. But any progress had been on hold while the city searched for a permanent replacement for City Manager Marc Ott. That happened with Cronk. Weeks later, Manley began to draw significant support for the permanent title following his handling of the bombing saga.

Cronk acknowledged that support at the time, saying he would announce his selection process for finding a permanent chief in the coming weeks. That evidently begins today.

Community forums begin in earnest next Monday, May 7, at the Turner-Roberts Recreation Center (7201 Colony Loop) at 6pm. There’s another, and there’s another one scheduled for 7pm on Thursday, May 17, at the KLRU Studio at 2504 Whitis. Both will be broadcast and streamed live online. The city has also set up a website, www.speakupaustin.org/ournextchief to solicit feedback, and welcomes comment via email (ournextchief@austintexas.gov) and phone, by calling 3-1-1. 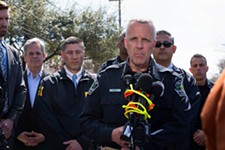