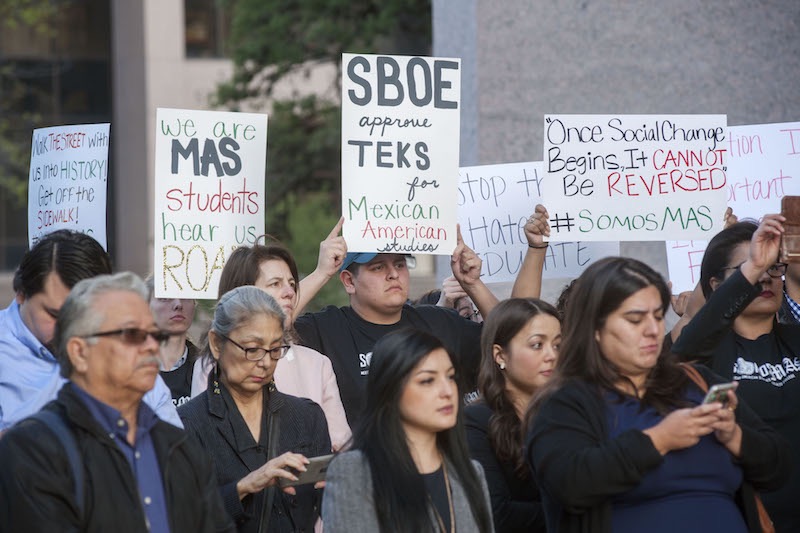 On April 11, people rallied outside the Texas State Board of Education in support of a standardized Mexican-American studies course curriculum. (Photo by John Anderson)

With more than half of Texas’ 5.4 million school-aged children coming from Mexican or Latino backgrounds, the move is long overdue. However, sticking to its right-wing roots, the Republican-dominated 15-member board changed the name of the course from Mexican-American Studies to “Ethnic Studies: An Overview of Americans of Mexican Descent,” after conservative board member David Bradley, R-Beaumont, objected, in a glaring display of ethnocentrism and American exceptionalism.

“I don’t subscribe to hyphenated Americanism. I’m not Irish-American, I’m not German-American. Our country is a melting pot. I find hyphenated Americanism to be divisive,” said Bradley, who in 2014 called the Mexican-American studies course “reverse racism,” its supporters “radical Hispanic activists,” and threatened “to pull a Cesar Chavez and boycott” public testimony on the issue.

A visibly frustrated board member, Marisa Perez-Diaz, D-San Antonio, shot back at Bradley during the Wednesday, April 11 preliminary vote. “As a Mexican-American, my experience is unlike your experience. I’m not asking you to prescribe to something un-American. I'm asking you to be inclusive,” she said. “This sends a message that we are not about inclusivity. I will leave it at that and not go down this rabbit hole.”

Most Democrats on the board opposed the name change, but voted to adopt in a 14-1 initial vote, with board member Lawrence Allen, D-Houston, solely dissenting due to the course name. (Ken Mercer and Tom Maynard, the two Republican members that represent parts of Travis County, voted in lockstep.) “So many people can’t embrace the concept of just ‘America’ by itself because it seems to be that America is exclusively for whites,” said Allen, who is African-American. The final vote came two days later following a move by member Ruben Cortez, D-Brownsville, to switch the course name back; Cortez cautioned that the board could save ample time by preventing several testifiers against the new name at its next meeting in June, however while five Democrats voted in favor, the nine Republicans shot it down. An emotional Perez-Diaz spoke in protest of the name, telling her colleagues she was disappointed by the inaccurate identification of her heritage. "We identified thousands of children across Texas today and took that power from them,” she said. “I hope these tears are not seen as weakness but as hurt and anger toward people I consider colleagues.”

Nevertheless, the SBOE vote is being largely celebrated by scholars and advocates alike as a victory from a board that has downplayed Hispanic and Latino figures in the recent past. The course is based on one currently used by Houston ISD. Significantly, the board also moved to create a process for approving additional elective courses in ethnic studies in the future, including Latino, African-American, Asian-Pacific Islander, and Native American studies. “This should have happened four years ago, but we’re pleased to see the board move forward,” said Kathy Miller of the Texas Freedom Network, SBOE watchdogs. “It’s important for students to learn that the story of Texas and our nation includes the experiences and contributions of Mexican-Americans and other people from diverse backgrounds.”

“As a Mexican-American, my experience is unlike your experience. I’m not asking you to prescribe to something un-American. I’m asking you to be inclusive. This sends a message that we are not about inclusivity.” – State Board of Education board member Marisa Perez-Diaz

It’s been a long road for Mexican-American studies advocates, who hoped the board would pass the unified curriculum in 2014. Instead, they rejected that vote but gave school districts the option to create the course on their own and allowed textbook publishers to submit books. But by putting the cart before the horse, publishers – and teachers – struggled without official standardized guidance. That illogical process led the way for a racist and error-ridden book, Mexican American Heritage, in 2016, which the board voted down (“State Board of Education Rejects Racist Mexican-American Textbook,” Nov. 16, 2016). It also passed up on a book by a Texas-based Mexican-American activist due to factual errors.

The National Association for Chicana and Chicano Studies (NACCS) Tejas Foco Committee on MAS Pre-K-12 and other groups have lobbied for the curriculum over the years, recently garnering nearly 3,000 signatures on a Change.org petition. The Mexican American Legislative Caucus, the Texas Senate Hispanic Caucus, as well as the House and Senate caucuses have also recently appealed to the SBOE in a letter.

Advocates got their chance to speak to the board directly during a hearing on Wed., April 11. Nearly 40 professors, students, and scholars passionately testified for MAS, arguing the course would help validate their existence, empower them culturally, and, as teachers argued, would allow them to spend time teaching instead of planning what to teach. Several speakers pointed to the many benefits of MAS courses: higher high school graduation rates, grade point averages, retention rates, and overall academic achievement across subject areas, findings discovered in scholarly research including a 2017 Stanford University study.

“We have the opportunity to make history,” said Jayme Mathias, AISD trustee and executive director of the Mexican American School Boards Association, joined by Manor ISD trustee Ana Cortez at the hearing. “We can share their rich history, literature, culture, and traditions. I hope this is the first of many intersectional studies.” AISD rolled out an Ethnic Studies course for eight of its high schools this past school year and plans to offer it to all high schools in August. The course includes the study of the Mexican-American experience and the district will “assess how to best meet the needs of all of our students” as it relates to implementing a stand-alone MAS course, Jessica Jolliffe, AISD social studies administrative supervisor, tells the Chronicle. Greg Pulte, UT Austin education policy graduate student and father of a public school student, reminded the board that political and educational institutions often dismiss people with Mexican-American heritage. “We can send a symbolic message that says the state is inclusive and values the history and culture of its citizens.”

Texas now stands as the only other state besides Arizona to greenlight a Mexican-American studies course in public schools. The Arizona course was met with criticism from conservative state lawmakers who banned the course in 2010 after claiming it taught Hispanic and Latino students they were being oppressed by white people. After a seven-year battle, a federal judge struck that ban last year.

As evidenced by Bradley’s not-so-subtle marginalization of Mexican-Americans through his course name change, the board is still a long way from reflecting progressive education ideals. But paving the way for a MAS course – even after four years of fighting – should still be counted as an important step in the right direction. 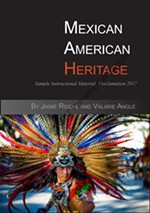