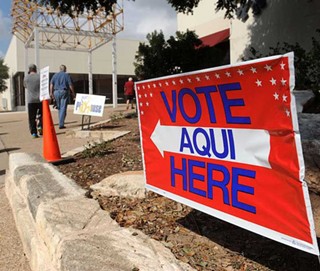 When it comes to voting laws, Texas can’t seem to keep it legal.

In a ruling that may force the state to change its voter registration laws, U.S. Judge Orlando Garcia found Texas in violation of the National Voter Registration Act (also known as “motor voter”) for using a different voter registration process to those applying for or renewing their driver’s licenses on the state website vs. in-person.

Texans looking to change their address online with the Department of Public Safety must print out a separate form and mail it to the county’s election office; but if they make the change in person, DPS instantly sends the new address to the county office. That process brought “widespread confusion” and thousands of disenfranchised voters, who thought they had updated their voter registration when they hadn’t, according to plaintiffs with the Texas Civil Rights Project, who filed the suit in 2016. TCRP’s Beth Stevens said the organization is “heartened and excited” by Garcia’s order. “For too long, the state of Texas has ignored federal voting rights laws intended to ensure that all eligible voters have an opportunity to register to vote. Even worse, because of these failures, countless Texans have been prevented from casting a ballot that counts, thereby unlawfully shutting people out of our democratic process.”

TCRP asked Garcia for a 90-day timeline to change policies, making them active just before the October registration deadline, and in time for the November general election. Garcia hasn’t specified how Texas will need to comply with the law but said that information will come in the next few weeks. Attorney General Ken Paxton has unsurprisingly vowed to appeal Garcia’s ruling. Some predict the decision could hopefully end with Texas joining nearly 40 other states by offering online voter registration – a first for Texas. Austin Rep. Celia Israel, who sought to pass a bill to do so during the 2015 and 2017 legislative sessions, used the ruling as an opportunity to make another pitch for online voter registration, pointing to greater cost-savings, security and accuracy.