Black Thought at SXSW in 2017 (Photo by David Brendan Hall)

A Chronicle staffer standing in the media line at the Fifth Street venue overheard venue staffers and SXSW volunteers talking about a bomb threat at the venue, and delivering word that the show was canceled.

Roots drummer Questlove confirmed news of the cancellation via a tweet around 8:30pm, in an attempt to save fans from waiting in line. Around the same time, the drummer posted an Instagram story with the following caption: “Welp. It’s 2018. Show cancelled. These are the times we now live in.” (The tweets and story have since been deleted.)

A second Chronicle staffer spoke with someone working at Fair Market tonight, who confirmed that Austin Police were canvassing the property to determine whether there is any validity to the threat. There are no plans to resume tonight’s show.

SXSW tweeted the following while we were editing the first version of this story:

The Bud Light x The Roots SXSW Jam at Fair Market has been canceled. We apologize for the inconvenience and appreciate your understanding. #SXSW https://t.co/iLkmAcroAh 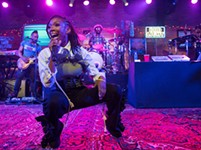 SXSW Music Live: The Roots & Friends
“This is the best shit of the whole South By!”