City Council adjourned at not quite midnight last Thursday (Feb. 1) – not too shabby for an agenda bursting to 125 Items. During the long day and evening, they managed to formally appoint a new city manager, punt the Champions (again), and approve (but not fund) a Master Plan for city pools. 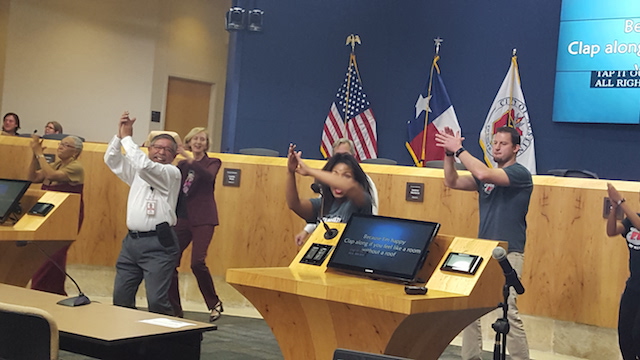 City Council members and staff Getting Their Happy On, Feb. 1 (Photo by Michael King)

The first-meeting-of-the-year festivities began with two now annual rituals: a brief group “wellness” exercise session (danced to Pharrell Williams’ “Happy”) and a number-drawing to reshuffle the council members' places on the dais (to take effect next meeting). “Happy” was also last year’s song, and is undoubtedly danceable — but isn’t this The Year of Bruno Mars? (Trendier observers suggested Cardi B instead — perhaps they meant Cardio B?)

Also recreational on the day’s (après dinner) menu was the Aquatic Master Plan, a vote delayed from last year when the Council saw the price tag – $124 million in a proposed bond package that would repair many old pools (with leaks an increasingly expensive problem) and potentially add a few more in underserved neighborhoods.

Simultaneously, the Plan ranked beleaguered existing pools for potential closing by Parks and Recreation, and that politically sensitive issue was the subject of an amendment that will require any actual proposed closing to be returned to Council for review and approval. Nevertheless, if there is not a substantial infusion of money for maintenance and repairs, one moment of citizen testimony will likely prove prophetic: “The pools that close will close themselves.”

The Master Plan funding – up, down, or sideways – was left hanging, likely to be considered for some sliver of the November infrastructure bond. Council Member Jimmy Flannigan (the sole nay vote on the Plan) pointed out that “this is a money problem, not a plan problem,” and CM Greg Casar added that the voters have never approved $120 million for affordable housing bonds (presumably a more urgent need). So we have a Master Plan … but the aging pool problem remains.

Speaking of left hanging … the Champion Tract 3 decision, whether to re-approve a 2016 settlement agreement with the developer, was postponed, for at least two more weeks, for additional review. In the recent interim, the Environmental Commission had recommended against approval, because (as summarized by Mayor Steve Adler), the agreement is either not “environmentally superior” to the initial 1996 agreement with the original landowners (the Champion family), or more precisely … “not sufficiently superior.”

City Environmental Officer Chuck Lesniak presented a detailed report on the agreement – updated since the December postponement – making the case that the 2016 agreement provided additional protections to the site. (The agreement was approved by Council in 2016, but invalidated after neighbors sued and a court ruled that Council’s posting language for the vote was inadequate.)

Neighbors and some council members want to return to negotiations, but the owner/developer – Mark Stevenson, of Slate Real Estate Partners – objected to more delay, telling Council his firm has already spent $2 million on the previously approved project.

“It's kind of like we fulfilled our obligations under the contract,” said Stevenson, “but the city has a right to rehear it all, re-litigate it all, and potentially change their mind and come to a different conclusion the second time around – because the city made a mistake in a posting.”

Re-litigation was definitely in the air – Mayor Adler recounted the lengthy history of the zoning disputes on the tract, noted the role of the Legislature in handcuffing the city on land use policy, and acknowledged that he couldn’t see a likely way to impose current code standards on what is legally a grandfathered site and an existing agreement.

Maybe somebody on the dais will invent time travel before Feb. 15.

• Collaborators Need Not Apply: On consent (only CM Ellen Troxclair dissenting), Council approved a resolution directing staff to research the possibility of banning contract work with companies engaged in the “building, maintenance, or financing” of the Trump administration’s proposed border wall (the resolution was previewed at a morning press conference, and has received some national coverage, although any actual ban is yet to come).

• I’d Take That Deal: Council formally approved the hiring of new City Manager Spencer Cronk, at a salary of $325,000, an “executive allowance” of $7,200, and a temporary housing allowance of $4,500/month for six months.

• Dockless Bikes: After some hesitation – experiments elsewhere have had mixed results – Council approved a “pilot” dockless bike program to expand bike-rental services throughout the city. Transportation Department Director Robert Spillar said they would be researching model policies, and the program would not be operable for several months (i.e., after the spring festival season).

• It’s Conditional: CM Jimmy Flannigan continued his mostly quixotic effort to decrease the use of “conditional overlays” (specific use limitations on single tracts of land) in zoning cases, which lead to tract-by-tract zoning instead of common, area-wide or category standards. His dais colleagues mostly cluck sympathetically and vote against him.

• Is That a Compliment?: Energy activist Paul Robbins presented his rate appeal against Texas Gas Service, arguing that some of their conservation programs (e.g., tankless water heater rebates) are in fact not cost-effective. TGS staff responded that the entire “portfolio” is cost-effective – although the results in some programs fluctuate from time to time (mainly depending on the weather). Council sided with TGS, but vowed to review the question next year. CM Flannigan told Robbins: “I'm going to say this with love because I've been described this way, too. Sometimes a passionate nutjob is what you need. And I've been that guy from time to time myself, and so thank you for sticking with it and hopefully we'll have a more substantive conversation next year.”

Expect Robbins to remember that vow. 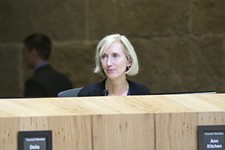