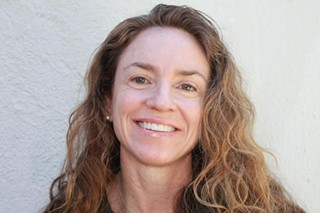 After nearly four years and countless hours spent sorting through CodeNEXT, Nuria Zaragoza is stepping down from the city’s Planning Commission – just two weeks before draft three of the land use rewrite is unveiled. In her place, District 7 Council Member Leslie Pool has appointed Austin Energy retiree Todd Shaw.

Pool said Monday that she’s sad to see Zaragoza leave, but that Zaragoza had been considering her resignation from the volunteer board for about six months. “We’re so appreciative of her staying on for this long,” said the council member. “She’s really given above and beyond, and has left some big shoes to fill.”

During her time as commissioner, Zaragoza has held what she describes as a “minority point of view.” Wary of upzoning, Zaragoza has often championed neighborhood concerns and looked for potential community benefits in both zoning debates, as part of PC’s regular work and particularly with CodeNEXT. But after an “intense” four years, Zaragoza said she’s feeling the toll. “I felt myself getting negative and thought it would be best to have someone with fresh perspective finish it off,” she confessed, alluding to CodeNEXT and its looming final draft. She said it’s “weirdly sad” to not play a role in the completion of the land use overhaul. Concurrent to her time on the Planning Commission, Zaragoza also served on the CodeNEXT Advisory Group, which disbanded this summer after submitting feedback on draft one.

Pool said Shaw has been part of District 7’s CodeNEXT outreach group for several months. He “jumped into the middle of the mire” to address residents’ concerns, answer questions, and assuage fears – something Pool suggested CodeNEXT’s city staff should do more often. Upon hearing of Zaragoza’s desire to leave the commission, Pool began scouting someone to replace her. “Todd just rose to the top of the list,” she said.

Tuesday night’s joint PC and Zoning & Platting Commission meeting will be Zaragoza’s last. Shaw will begin attending PC meetings beginning Feb. 1, but his first official day as a Planning Commissioner will be Feb. 13. Lucky for him, that will be the day land use commissioners will be presented the third draft of CodeNEXT.