On Sunday afternoon, Mayor Steve Adler formally initiated his 2018 re-election campaign at Saengerrunde Hall. The next afternoon, Chronicle staff writer Michael King sat down with the mayor for a conversation about his perspective heading into the new year. What follows are lightly edited excerpts from that conversation. 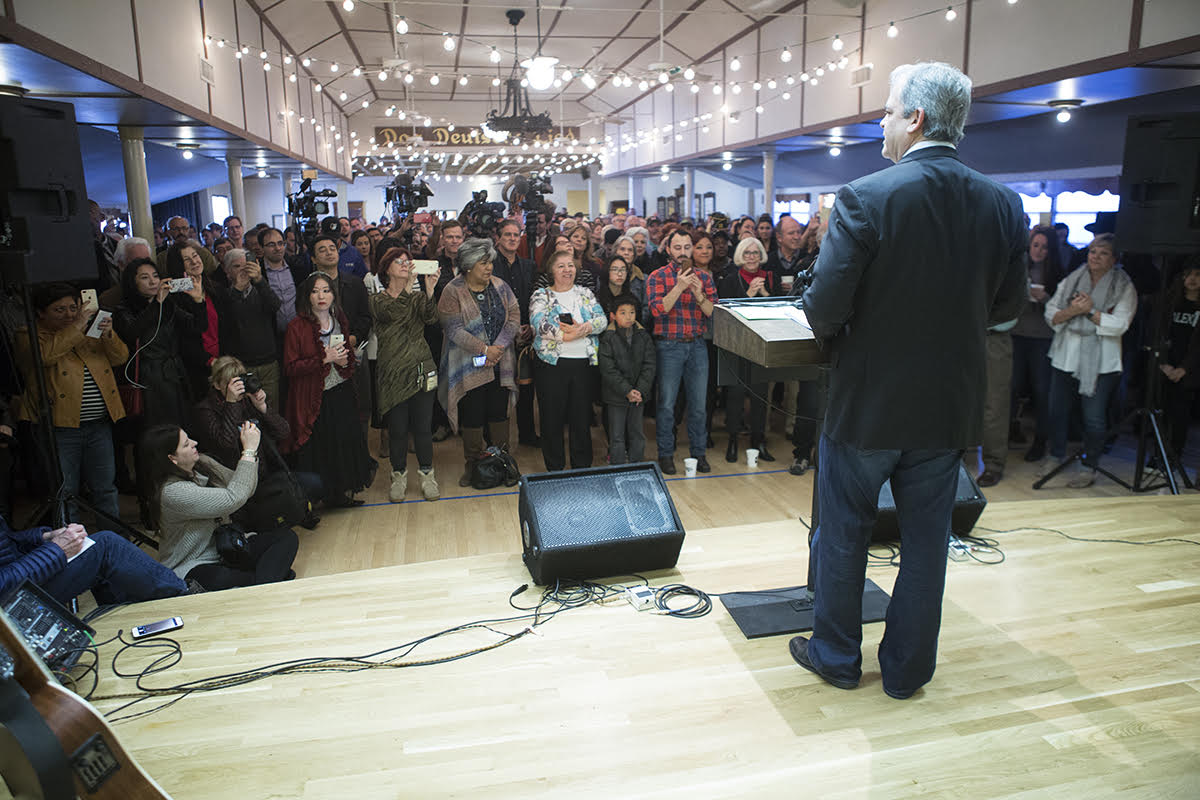 Austin Chronicle: Are you ready to do this all over again?

AC: In your kickoff speech, you described what you called the “Austin paradox” – that Austin must change but we must simultaneously preserve what’s special about Austin. Can you elaborate?

SA: It’s true. This city is growing. Every city in the Southwest part of the country is growing. That growth can put at risk some of the things we like best about this city, some of the things that are embedded into our culture and our spirit. So the paradox for us is how do we grow, and at the same time preserve what makes Austin special? We can’t stop the growth, and we have to preserve what’s special. A lot of the discussions around the city on policy matters involve having to resolve that paradox.

AC: At least some folks would like to inhibit growth, and blame the Chamber of Commerce, or city economic incentives, or other factors for encouraging rapid population growth. Your thoughts?

SA: There is only one way to stop Austin’s growth, and that’s to make it an undesirable place for people to live. That’s not the platform I want to run on. It’s anticipated in the paper today that Austin will create 30,000 jobs this next year. The City Council in my few years approved – what – one incentive package? For Merck, which was a $75,000 [annually, for 10 years] incentive package, with an Innovation Zone that ties to Huston-Tillotson. That’s not what’s making Austin grow. Austin is growing because it’s beautiful, because of the lakes, because of Barton Springs. It’s growing because of our music, and diversity of culture. It’s growing because we’re a welcoming city, because of the positions we take on climate change. It’s growing because people want to live here. That’s why it’s growing, and our challenge is to figure out how to manage that growth in a way that still preserves who we are.

Not growing is not an option. Pretending we’re not going to grow is not a good option. And much of what this Council has been doing over the last three years is taking a really serious and sober look at what is happening in this city, and then be willing to stand up and really confront the hard issues. This is a Council that hasn’t just lamented the lack of affordability, it’s actually stepped up and changed how we move money around and changed priorities to move forward on affordability. …

This is a Council that did the mobility bond, recognizing that there are going to be more and more people on our roads. You actually have to do stuff to plan and to manage the growth.

AC: What do you think will be your campaign emphases for 2018?

SA: At a really high level, it’s exactly that – looking at everything we do, and taking a look at how you manage growth and preserve what’s special about the city. That means, in terms of the climate we’re in right now, defending the city against what’s happening at the state level and at the national level, it means building stronger and stronger alliances between cities, both in the state and in the country, as well as internationally. It means doing the things we have to do while recognizing that we’re in a state that’s not predisposed to the culture and values of this city, and now a federal government that is not as well. It’s defending the city, it’s fighting for the city, on those levels.

Yet in the challenges we have at home, we’re going to have to still maintain a focus on affordability and mobility, because those are our two biggest challenges. We’ve gotten ourselves in a hole on both of those, and we’re not going to turn the ship on those, right away. We have to be really deliberate, and long term in what you do, to be able to manage growth.

AC: Looking back to 2014, what do you think are the major changed circumstances?

SA: I did not think I would be spending as much of my time at the state and federal and international levels. But we’ve had to … because cities around the state and around the country are looking to Austin for leadership, in large measure because of the community that we have here. …It also means that comes with responsibility.

We’ve moved forward on other things. We created the Equity Office, and move everything we do through that filter. … We’ve added 6,500 homes – affordable homes – that help to fill that gap of 65,000 homes identified in the Strategic Housing Blueprint. … You do whatever you can, when you can, because there is no one answer, there is no silver bullet, no one thing you can do and then wake up tomorrow and say, ‘We’ve solved that problem, let’s go on to the next one.’ It has to be in your mind when you wake up, and when you go to sleep. …

We’ll launch this year, the Housing Conservancy … to preserve workforce housing. … It’s the evolution of the Housing Strike Fund. … Government takes a lot longer to get things done than private practice, but that’s because there’s a greater value placed on transparency and public engagement – and both of those things make for much more unified community direction and buy-in. But it also means things don’t move as quickly. So I am really proud that’s happening, although it’s a year after I thought it would be at the place we are now. …

AC: Let’s talk briefly about CodeNEXT – critics have said the drafts have abandoned certain community benefits, like affordable units in return for entitlements like greater height or density.

SA: CodeNEXT is a process, not a product, and I thoroughly expect that the drafts that finally come to Council for consideration are going to be versions of the code that enable us to use the tools we have to drive affordability to the greatest extent possible. I just don’t see us doing anything else. Those people that are working on it – staff, consultants, people engaged from the community – are now trying to determine how best to do that. Ultimately, we have to calibrate all of these things well. We have to make sure that we’re not leaving affordability on the table – meaning we’re not giving anybody an entitlement without getting in return as much affordability as possible for that entitlement – but at the same time, you can’t ask for greater affordability than the entitlement is worth in the marketplace, because then no one avails themselves of that opportunity – and you have this great ordinance that [doesn’t deliver any units]. …

I just can’t believe that at the end of the day, this Council is not going to maximize all the affordability that we can invite, and realistically get.

AC: You mentioned the out-of-town demands on your time. How else have changed circumstances affected your perspective?

SA: The first priority is and always has to be what’s happening here locally. I thought when I ran for this job, I was going to spend more time doing other things than this job – I mean, just visiting with friends, or walking around the lake. But this is pretty much what I do. I volunteered to do this, and that’s what the job takes, and I want to do the best job I can, in whatever time I have to do it. Even with the state and national demands, I still spend most of my time on these local issues, and it’s a lot more than a full day just on that. … Everybody on the Council is working really, really hard, but people in town do expect the mayor’s office to be the face of the city, to take positions, to be responsive, and to listen. All the council members do that in their districts, I do that in 10 districts, and media seeks me out as the voice of City Hall.

SA: This city has really significant challenges, that we have to dedicate ourselves to fix. But we also can’t lose sight of the fact that we have one of the best economies in the country, one of the most desired quality of life in the country. There are even people who live here because of our low cost of living … by comparison with the places they come from. So you can’t lose sight of the fact that there are a lot of things are going really, really well here. Our unemployment rate is a point lower than the rest of the state. We’re the major center for venture capital in the state. We can’t lose sight that this really is a magical place, a special place. That’s why I live here, that’s why many people come to live here, and I believe in the people that live here. I believe that as a community, we’ll be able to make the right choices, to be able to plan and manage growth in a way that preserves what’s special about this place. I think this Council we have now will make good choices to address those challenges, and what I’m asking the community is to let me continue working on it.