Steve Adler tells supporters “together we will win this campaign!”

On Sunday afternoon before a large and enthusiastic crowd of supporters at Saengerrunde Hall, Mayor Steve Adler formally initiated his 2018 re-election campaign, in a speech that recalled his “New Way Forward” of 2014 while asking Austinites to “keep doing the job we started.” 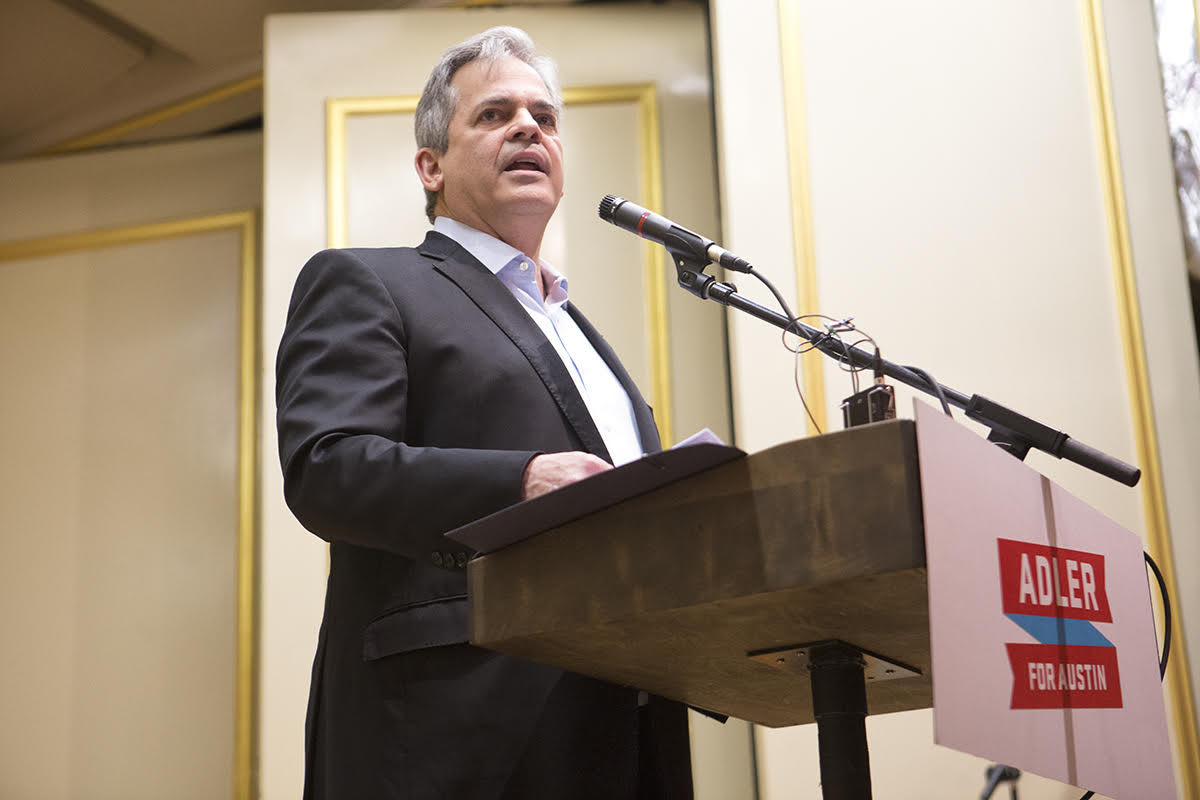 Introduced by a half-dozen elected officials and local activists, the mayor recited a list of accomplishments, encouraged supporters to defend that progress and the city itself from the backlash of state and federal governments, and asked for support in the campaign and in November. In what he called the “Austin paradox,” Adler said, “We must fiercely, seriously, and unabashedly continue to move forward, and part of that requires us to actively preserve what we love about the city – for my family, and your families, forever.”

“We have been in this together,” he concluded a 30-minute oration. “We are still in this together; and together we will win this campaign.” Adler was introduced briefly by a group that included both elected allies and Austin activists. State Senator Kirk Watson was followed by state Rep. Celia Israel; former Housing and Urban Development Secretary (and former San Antonio Mayor) Julián Castro; Meme Styles of Measure Austin; women’s health care activist Robbie Ausley, and finally Congressman Lloyd Doggett. Each praised the mayor for some aspect of his administration affecting their own political engagement, and Castro described him as “the best mayor in America.” Introducing the mayor, Doggett lauded Adler’s ability “to work with everyone,” especially important in a time “when there is so little leadership” elsewhere, either at the state Capitol or in Washington, D.C. Doggett applauded the mayor’s enthusiasm for “the diversity that makes us strong.” In some ways, Adler’s speech was a reprise of themes from his 2014 campaign, in that he recalled his 1978 introduction to Austin, Shiner Beer, and Barton Springs, and asked his audience to remember their own moments “when they first fell in love with Austin.” He reiterated that “Austin is a magical place,” that “anything is possible” here, and congratulated the city and the crowd as a welcoming place – thanking those who put together thousands of “Welcome Kits” for those who fled Hurricane Harvey. And he repeated a now common theme of Austin (and Austin officials) under attack from state and federal authorities, including threats of removal and even arrest for dissent against the crackdown on immigrants. He received loud applause for his refrain, “No matter how much the world around us goes completely insane, we’re going to be Austin.” He defied Gov. Greg Abbott and others who would impose public safety or environmental mandates undermining city regulations, and had particularly strong words against the “bathroom bill” that would have discriminated against transgender people. “They even tried to tell us who may use which bathrooms,” Adler said to loud applause, “even though a woman is about a million times more likely to get harassed working in the Capitol than using a bathroom at a restaurant in Austin.” And he offered Gov. Abbott and the Legislature a deal: “You fix school funding and stop increasing our property taxes, and we’ll take care of our own bathrooms.” Other themes: defending immigrants against ICE and other federal intrusions; the heavy burden of a “state property tax” for public schools because the Lege won’t act to fix school funding; Austin’s action on climate change (including the mayors’ Paris Accord) and increasing solar energy and other renewables; progress on mobility, jobs, and housing; and efforts to address institutional racism. On a couple of currently heated issues, the mayor welcomed the ongoing debate over the revision of the land development code (without actually mentioning “CodeNEXT” by name), and declared, “We’re going to work together to get to the best code revision result.” And he announced, “We’ll expand the Convention Center” to generate tourist-tax funding for homelessness, the music industry, and historic preservation – although that decision remains a contested one among City Council members. Some of those council members – Pio Renteria, Ann Kitchen, Jimmy Flannigan – were among the crowd Sunday. We spoke with Kitchen, who said she is supporting the mayor because “he’s a good man who is passionate, he treats everybody fairly, and we can work together even when we disagree.” In addition to council members and those who offered introductions, the crowd included Travis County Commissioner Jeff Travillion, former Council Member Betty Dunkerley, attorney and Asian-American activist Richard Jung, longtime city commissioner Dave Sullivan, Austin Neighborhoods Council activist Daniel Llanes, and AFSCME political director Jack Kirfman. As of today, Mayor Adler has a single declared opponent – former Council Member Laura Morrison – although the filing period for the Nov. 6 election extends until Aug. 20. For more on the campaign, follow the Daily News and the Chronicle’s print editions.