Union to return to the table for more bargaining ... but when? 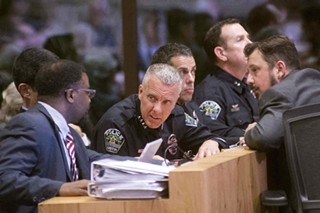 Seven hours of testimony yielded a quick conclusion Wednesday night, as City Council unanimously voted to send the Austin Police Association back to the bargaining table with city negotiators, who will try to hammer down a deal Council members determine provides more transparency and accountability measures for citizens, and more assertively allocates money to APD programs that benefit mental health and community policing.

Council heard from more than 150 witnesses, the vast majority of whom testified against the agreed-to contract. Those who did speak in favor of it were often officers themselves, or family members of an officer. And it became quite clear early in the evening that Council members would face a righteous wrath from those in chambers if they voted for the contract. Once Jimmy Flannigan motioned to send the two sides back to the table, and Alison Alter offered a second, the dominos began to fall. Ann Kitchen, Greg Casar, and Ora Houston. Pio Renteria proved the deciding voice. From there, even those who wanted to support the deal wouldn’t be judged for falling in line.

Association members hinted throughout the evening that a “no” vote on the contract would usher in a lengthy standstill with the city whereupon the union’s operating under civil service statutes. The APA board meets this afternoon to discuss last night’s decision and come up with a game plan going forward. Anticipate at least some length of time to pass before Ken Casaday and company sit back down with city negotiators. A big part of their message hinged on the idea that the city and its citizens would truly be worse off without a contract in place. They’ll likely want to recoup what leverage they can by letting talks stall.

Council meets again today for its regularly scheduled meeting. Catch next week’s print edition for more on the fallout.