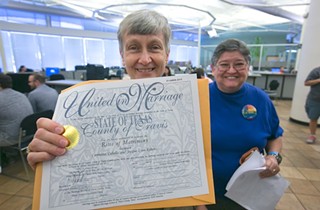 A Travis County couple picks up their marriage license on July 4, 2015 following the legalization of same-sex marriage by the U.S. Supreme Court. (Photo by Jana Birchum)

The City of Houston is not backing down in its fight to secure full rights for married same-sex couples, despite Monday’s decision by the U.S. Supreme Court to let stand the state’s ruling that same-sex marriages are not entitled to spousal benefits under Obergefell v. Hodges, which granted marriage equality in 2015. Houston city attorney Ron Lewis said shortly after the ruling that “further proceedings will likely be required. In the meantime, the City of Houston’s policy to provide benefits remains in effect.”

SCOTUS’s Monday ruling stems from a Texas Supreme Court ruling in June, when the all-Republican bench ruled that while Obergefell allows same-sex couples to wed, it does not guarantee spousal benefits. Instead, the justices argued that states should be left to decide those matters, a ruling SCOTUS retroactively affirmed on Monday. SCOTUS issued its ruling on Monday morning without so much as an explanation, buried in a 15-page document listing the latest batch of denied petitions. The ruling will likely open the door to additional challenges and lawsuits determined to undermine LGBTQ rights.

The case dates back to 2013 when former Houston Mayor Annise Parker extended city benefits to employees in same-sex domestic partnerships. That decision was challenged in an appeals court and temporarily blocked. In the interim, SCOTUS legalized marriage equality, which ultimately caused the court to reverse the injunction. But that didn’t stop angry and homophobic Houston taxpayers Jack Pidgeon and Larry Hicks from pestering the Texas Supreme Court into reviewing the case. The two’s petition was originally denied last fall, but after receiving multiple amicus briefs from state political leaders, including Gov. Greg Abbott and Attor­ney General Ken Pax­ton, SCOTX decided to reopen the case in January.