Providers Back in Court To Stop Texas Abortion Ban 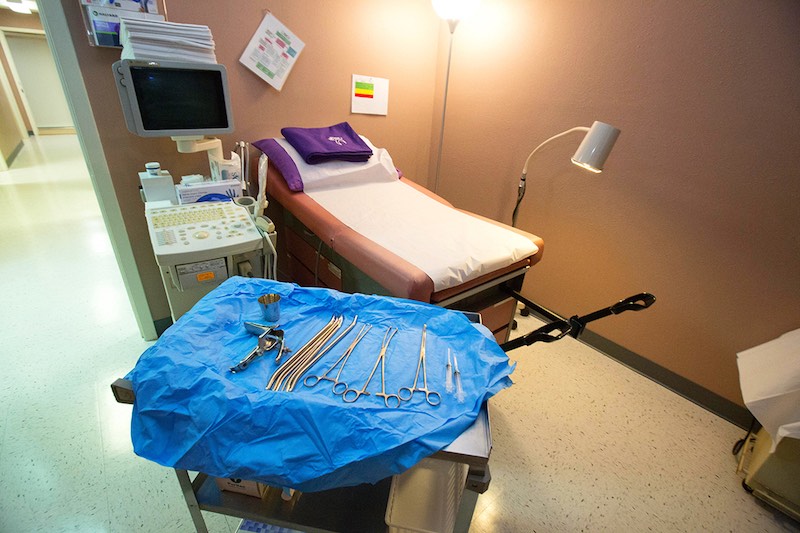 A patient room at Whole Woman's Health in Austin. WWH is a plaintiff in the case against a new Texas law that bans D&E abortion. (Photo by Jana Birchum)

The latest obstacle, sweeping abortion bill Senate Bill 8, which passed during the 2017 legislative session, carried a provision banning dilation and evacuation, or D&E abortion, the safest and most common type of second trimester procedure. If found in violation, doctors would face criminal charges (except in the case of a medical emergency). Abortion providers, including Whole Woman’s Health and Planned Parenthood, represented by the Center for Reproductive Rights and Austin attorney Pat O’Connell, filed suit in July and succeeded in temporarily halting the ban from taking effect as intended on Sept. 1.

On Thursday, Nov. 2 they returned to U.S. Judge Lee Yeakel’s Austin-based federal court to continue the fight, this time on the merits of the case. Abortion physicians testified that alternatives to the D&E procedure, including Digoxin injection, are not only unnecessary but add risk, pain, logistical barriers, expense to abortion, and even cardiac arrest in some cases, with little to no benefit. Dr. Mark Nichols, an Oregon-based physician, said the three alternate “fetal demise” procedures are more complex and require extra training. Typically, the injection procedures are performed at the 18th week of pregnancy or later while D&E is usually performed around the 15th week. Currently, doctors have scant guidance on how to conduct the procedure that early on in the gestation period. “I am concerned about the health of women in Texas,” Nichols told the court.

Dr. Bhavik Kumar, Austin family medicine and abortion doctor at Whole Woman’s Health, pointed to the many barriers Texas women must already face when accessing abortion including the state’s mandated 24-hour sonogram waiting period; securing time off work and childcare, and cost. Banning D&E would add to those barriers by tacking on a third medical visit, higher expense, and risk of complications, like the possibility of infection. “The benefits do not outweigh the risk. [Using Digoxin] would not help the health and safety of my patients,” said Kumar. Speaking to the risk of using the fetal demise method before 20 weeks, Dr. Robin Wallace, medical director of the Southwestern Women’s Surgery Center in Dallas, said bluntly, “I think it would be inappropriate and would be experimenting on my patients unnecessarily.”

In an unusual and rare move, Attorney General Ken Paxton visited the abortion rights hearing on Thursday and delivered a short statement outside the courthouse afterward, taking no questions from the press. Paxton, scrapping any mention of protecting women’s health and safety as the state has argued in recent past, directly called the D&E ban a measure meant to protect the “dignity of the unborn.” Supplanting factual medical terminology for shock-value anti-choice theatre, Paxton said in “dismemberment” abortion – the non-medical term for D&E – “the abortionist literally tears a fully formed child apart limb by limb.” One need not be a medical expert to recognize a fetus is not equivalent to a “fully formed child.” But when laws aren’t based on facts, why start now.