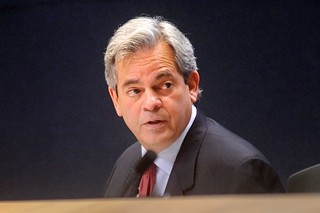 Mayor Steve Adler has withdrawn the nomination of Frank Rodriguez, a mayoral aide and one of Austin’s longest-serving Hispanic community advocates, from consideration to join the city’s new Charter Review Commission.

In a statement issued this afternoon, Adler said, “I’ve learned that members of the Charter Review Commission are required to live in Austin, and since Frank lives in Dripping Springs I’ll need to nominate someone else. It’s best Austin residents recommend Charter changes.”

The withdrawal comes after a week of political flak against the aide, who has also been dealing with serious and long-term health issues. Last week, the Statesman went on the attack against Rodriguez, alleging inappropriate communications between his office and the Latino HealthCare Forum, the nonprofit he founded, relating to minority participation contracts spinning off from the CodeNEXT process. Multiple sources say Council Member Leslie Pool then effectively blocked Rodriguez’s nomination because he lives in Dripping Springs – not Austin – meaning that his appointment would require a waiver, which Pool made clear she would oppose – an account Pool factually refutes; her office pointed to a Tuesday article in the Statesman, wherein she said she was “concerned his appointment will be a distraction from the mission of the Charter Review Commission.” While Adler could have moved forward with a vote, today’s withdrawal saves Rodriguez the hassles of an extended and contentious nomination process while sick.

A former city budget director, Rodriguez has long been a voice for Austin’s growing Hispanic population, and served as chair of the city’s Hispanic/Latino Quality of Life Resource Advisory Commission. He has been particularly engaged on health care issues, including an eight-year stint on the Travis County Healthcare District board, six years on the board of Central Health, and serving as the LHF’s CEO. He originally joined Adler’s team in 2015 as part of his “community cabinet” of policy advisers, but stepped down in September, citing his health. Rather than have City Hall completely lose his expertise, he was recommended for the lower-pressure position on the commission.

After a long career in Austin politics, there are questions as to why Rodriguez’s appointment has become such a lightning rod. There are some suspicions that he has suffered some backlash over the Latino HealthCare Forum’s recent criticism of Central Health. Moreover, there are rumblings that Rodriguez is being used to undermine Adler’s credibility – setting up a potential challenge from a mayoral candidate more amenable to the policies endorsed by the Austin Neighborhoods Council. Speculation is rife at the moment that former Council Member Laura Morrison could be recruited to take on Adler next fall.

This story has been updated to include Council Member Leslie Pool’s contention of the account that she would block a waiver for Rodriguez because he lived out of the city. Pool says her issue was with his potential conflicts of interest.