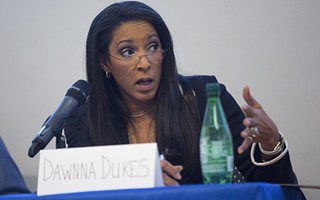 Rep. Dawnna Dukes, D-Austin, at a candidate forum held this summer. Dukes was cleared of all charges on Monday, but remains deep in the woods politically. (Photo by Jana Birchum)

Pflugerville Rep. Dawnna Dukes is probably breathing a bit easier on Tuesday after Travis County District Attorney Margaret Moore announced that she will drop all 15 charges – 13 felonies and two misdemeanors – against the local Democrat.

Moore originally filed charges in January, after a 2016 complaint alleging that Dukes claimed expenses she had not incurred and used her legislative staff for personal business, including baby sitting. However, in September, the D.A. announced that she would hold off on the felony charges. On Monday, she dropped both them and the misdemeanors, but for very different reasons. In a press statement issued late yesterday afternoon, Moore explained the change came because of a new interpretation of state House regulations about what is and is not considered a legitimate expense. The 13 felony charges had been brought because reading the House rules lead prosecutors to believe that Dukes had filed fraudulent per diem reimbursement vouchers for days when she was not at the Capitol. However, Moore wrote, “in preparing for trial,” House Business Office executive director Steven Adrian told Dukes’ attorneys that she did not need to travel to the Capitol to receive her per diem.

“Because the HBO did not enforce the House rule requiring travel to the Capitol, and because of a lack of House policies regarding the type of activities that would qualify as legislative business, we cannot demonstrate that Rep. Dukes received the payments because of her false statements,” wrote Moore. Had her office already known the HBO operated this way, she said, “the investigation would have been closed without filing charges.”

It’s a lousy outcome for all concerned. Dukes had become a political pariah within Democratic circles – not simply over the charges, but over what many perceive as her unwillingness or inability to do her job in the state legislature. Her long track record of campaign finance report failures and spotty attendance had long been overlooked because of her effectiveness on the House Appropriations Committee. However, after a car accident in 2013 left her with long-term medical issues, even she had announced that it was time for her to step down. Then there were the revelations about how she ran her office – which, while not a felony, did not reflect well on the representative. Yet Dukes stuck around, and has pledged to run again, even with multiple primary challengers, and her precinct chairs having sought a no-confidence resolution be passed against her.

Chito Vela, one of several Travis County Democrats lined up to challenge Dukes, was undeterred following Moore’s decision. Vela has repeatedly stated that his opposition is based on Dukes’ inability to do her job, not the outcome of the case. On Monday he wrote: “It’s important to remember what is undisputed. Her absence at the legislature is, quite literally, a matter of written record. All of us in [her district] effectively lost our representation in the Texas Legislature for the last two sessions.” Sheryl Cole, another challenger to Dukes’ seat, also pledged to continue with her campaign. “As I said from the start, ‘You got to represent,’” she wrote.

As for Moore’s office, the whole affair has turned into somewhat of an embarrassing misfire. The case was originally investigated under former D.A. Rosemary Lehmberg, who seemingly left the case on the back-burner as her last term wound down. When Moore took over, Dukes became her first high-profile prosecution, and now it has collapsed under what seems to be a basic misreading of the statutes – though investigators may find a small degree of solace in being able to point a finger at the House, where the left hand does not seem to know how to enact the internal policies that have been written by the right.

The revived Travis County GOP was ready to make hay of the debacle. New chair Matt Mackowiak lambasted everyone, from Lehmberg to Moore to Dukes. Ever the fiscal conservative, Mackowiak focused his ire on the costly prosecution that has been “botched at every step.” He was so eager to attack the Dems that, in an uncharacteristic moment, he even praised the local press: Much of the “substantial evidence” against Dukes, he said, was “dutifully generated by news media investigation.”

So what now for Dukes? The representative may have resolved her legal troubles, but her relationship with her precinct chairs has never been worse; she has barely spoken to fellow legislators; and she no-showed much of the last session, including key votes like the budget and Senate Bill 4. However, even before Moore’s concession, there were suspicions that sheer brand loyalty to Dukes would make her tough to beat in the primary.

That could be bad news for Travis County Democrats. Previously, Dukes’ minimal attendance record was an embarrassment. Now they may see her no-showing the Lege as a best outcome. 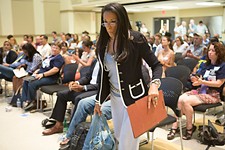 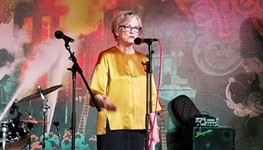