What was Jimmy Fennell doing before his fiancé's murder? 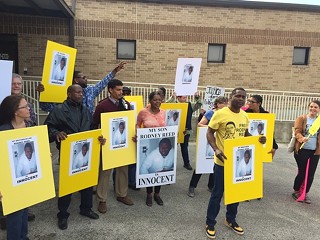 Rodney Reed’s family and supporters held a brief demonstration outside the Bastrop County Sheriff’s Office on Tuesday after the 21st District Court adjourned for the first of a four day hearing that could potentially earn Reed a retrial. His brother Rodrick told reporters that proceedings had left them “very hopeful.”

“We’re hoping that it stays the course,” he said, “and that justice will be had – not only for Rodney Reed but for Stacey Stites’ family as well.”

Presiding Judge Doug Shaver is tasked with deciding if recent evidence – the bulk of which stems from a 2016 interview of former Bastrop County Sheriff’s investigator Curtis Davis, conducted by CNN – supports the defense’s plea for a new trial. Davis is the former best friend of Jimmy Fennell, Jr., Stites’ fiancé, a former cop who’s currently in prison for kidnapping and raping a woman while on duty. Davis has told the network that Fennell confessed to him that he’d been out late drinking with several other police officers after a Little League practice the night before Stites was reported missing. (Fennell coached a team with his friend, fellow Giddings Police Officer David Hall.) The previously unmentioned detail stands in significant contradiction to Fennell’s long-told account of the evening: that he was home with Stites’ until she left for work around 3am. Though he never stood trial, Reed supporters believe Fennell is the person responsible for Stites’ death. Untested DNA evidence could prove that to be true.

So while Davis’ account is critical, how it stands up to the story Fennell testified to during Reed’s trial remains at the heart of this week’s hearing. But Fennell will not be testifying; the court learned through a written statement provided by his attorneys that he plans to invoke the Fifth Amendment whenever he’s called to testify. Davis first took the stand instead. Attorneys questioned him for three hours.

Davis admitted that he’s received disciplinary action for speaking to CNN, and told the court that he chose to do the interview, without consulting his supervisor, “to give a side of the story I didn’t think was being given.” Reed’s attorneys worked to emphasize the differences between Davis’ account and the story Fennell has long been telling, but assistant state’s attorney general Matthew Ottoway pushed back, arguing that the timestamps Davis assigned to Fennell’s arrival at home and the time Stites went to bed were merely assumptions, and did not prove any concrete contradiction.

Reed’s attorney Bryce Benjet called David Hall to testify after Davis. Hall, now a county commissioner in Calhoun County, said he doesn’t recall much about the night before Stites’ murder. He reiterated that Davis drove him and several kids home after practice while it was still light out. He does not recall staying late – it was a “school night,” he told the court. Ottoway remained steadfast in muddying the waters. “It’s a little difficult to remember this stuff because it happened 21 years ago,” he said.

Tuesday’s proceedings concluded with testimony from Nina Smith, the Little League manager in 1996, and Forrest Sanderson, one of three prosecutors who tried Reed in 1998. He had a difficult time remembering details, but could recall that Davis visited the district attorney’s office during the investigation and was “adamant that Reed committed the murder.”

“I had no reason to know at that point in time that [Davis] and Fennell knew each other,” he said. He thought Davis “took a personal interest because Jimmy Fennell was his friend.”

Reed’s hearing is expected to last through Friday. Benjet plans to call on forensic pathologists to discuss discrepancies over Stites’ official time of death – an issue of critical importance, especially recently, now that experts have concluded that the Travis County Medical Examiner Roberto Bayardo’s assigned time was likely off by multiple hours. After the hearing, Shaver will issue recommendation to the Court of Criminal Appeals. That court will then decide whether to grant Reed a retrial. 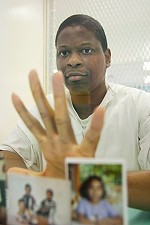