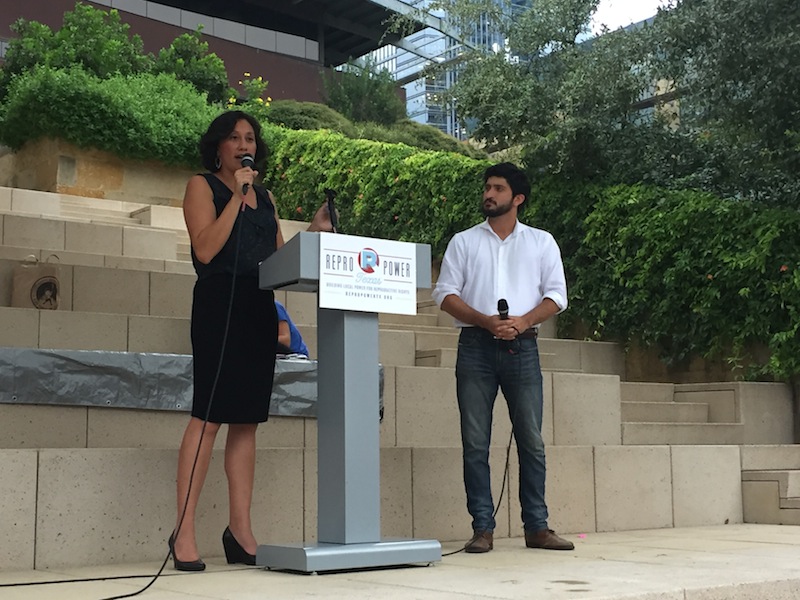 It’s almost become the norm in Texas that when reproductive justice groups gather in the public sphere it’s typically to rally against the Legislature’s latest attack on women’s health care.

But an initiative unveiled in cities across the state on Wednesday (Sept. 27) takes a different strategy – one that siphons energy from the usual defensive play to the offense. During an event at City Hall yesterday evening, the proactive Repro Power Texas reminded the public that reproductive rights matter all the time – not just when there’s a direct assault on those rights.

“We tend to assume reproductive justice advocacy only comes out when there’s a protest but a lot of the work in Repro Power is to inform and bring attention to these issues all year long,” said Maggie Hennessy, a volunteer at NARAL Pro-Choice Texas. Echoing the point, Lilith Fund Executive Director Amanda Williams said, “This is a proactive campaign. We’re always on the defense so this a time for us to come together and build local support and raise awareness about abortion access in the intersections with the many different movements, causes, and struggles.”

The campaign, launched in Austin, El Paso, and Dallas, comes during a legislative lull, and aims to lobby local governments – more amenable to the calls for social justice than the conservative legislators under the big dome – for reproductive justice policies. Among the goals on the ambitious list, local advocates are urging the City of Austin and Travis County to support increased protection at abortion clinics; 12 weeks of paid family leave at 100% of the employee’s salary following birth; evidence-based sex ed with an LGBTQIA component; emergency contraception accessible at county pharmacies, ERs, and publicly funded health centers; and accommodations for pregnant and parenting students. (Williams openly concedes the agenda is “pie-in-sky visionary” but followed up confidently, “Why compromise? This is what we need.”)

“When we were reading your agenda, Greg [Casar] and I were sitting here like, ‘check, check, check’; it was like reading our priorities,” said Council Member Delia Garza, joined at the event by her colleague, Casar. Garza recalled that her first protest was a pro-choice rally at Texas A&M, and that the first time she signed up to testify at the Capitol was to speak against the state’s 2011 pre-abortion sonogram law. “I’ve been marching and fighting for this issue for 20 years.”

Reflecting Repro Power priorities, on today’s Council agenda Garza has proposed a resolution (Item 57) directing the city manager to develop a comprehensive citywide needs and gap assessment of high-quality child care facilities, as well as the possibility of adding a child care facility to the ACC Highland Campus. Meanwhile, Casar is looking to get a resolution passed that would direct city staff to start getting feedback on a paid sick days policy for private employers (Item 55).

Repro Power isn’t just a Council lobbying effort, though. While abortion stories are often told at the Capitol after pleas to vote down restrictive health bills, telling them outside those circumstances builds normalization, breaking down the procedure’s stigma, organizers said. Taking the stage after the council members, Austinite Zoraima Pelaez, one of the handful of abortion storytellers, candidly shared her experience. “My sisters and many loved ones in my family were young parents growing up and I witnessed their struggles as a result, exacerbated by socioeconomic status,” said Pelaez, a first generation UT-Austin graduate, who discovered she was pregnant in college. “That decision was not right for me.”

“I demand a future with affordable access to stigma-free abortion care,” she said. “And I believe our city knows the value of respecting individual health care decisions.”