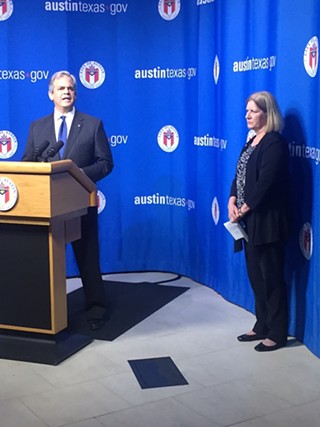 The second draft of the city’s land use code rewrite is finally here. On Friday morning, Mayor Steve Adler, interim City Manager Elaine Hart, and CodeNEXT staff gathered reporters at City Hall to announce the version’s release, and urged Austinites to stay – or get – engaged with the rewrite process.

“This code is not going to be as good as it can be unless we get input from all kinds of people in this city,” said Adler, who stressed that the code’s language remains a work in progress.

As promised by city staff and code consultants, the second draft arrives in tandem with the updated zoning map – both of which are available on CodeNEXT’s website, where public comments are already flowing in. Now begins the second round of community engagement, with a month-and-a-half-long period of public meetings and open houses (two of which will be available in alternate languages: Oct. 11’s Northeast meeting at Hart Elementary, presented in Vietnamese, Spanish, Arabic, and Mandarin; and Oct. 28’s at the Dove Springs Rec Center, in Spanish).

Adler opened the morning press conference by noting his three primary thoughts: First, that the draft has changed in response to community comments, of which he said there were thousands; and that the latest proposal does a better job of both protecting neighborhoods and providing more housing opportunities throughout the city. His final thought served to remind city residents that the version being released today is a draft – not a finished product. “It still needs work,” he said. “It’s better, but it’s still not yet done.” He said he’s positive that the code and community are moving in the right direction.

Yet the mayor’s support for the code overhaul was clear. To halt the process, as some neighborhood groups and individuals have requested, would result in the “evils of the status quo.” Adler highlighted the city’s chronic traffic issues, economic segregation, the housing crisis, flooding, and Austin’s hemorrhaging of communities of color and creatives, as the issues that cannot (and will not) change without a new, more cohesive land development code. The existing code is a piecemeal model that dates back to the Eighties, when Austin was a much smaller city. Adler reiterated: “The evils of the status quo are robbing us of what is magical about this city. … CodeNEXT is Austin’s chance – our chance – to get it right. The code is not the answer in and of itself, but it has to be part of the answer to better manage growth to preserve the spirit and soul of the city.”

CodeNEXT's executive project lead Greg Guernsey told the Chronicle after the presser that he feels good about the second draft and believes residents will see a lot of changes the community requested. And while he thinks some changes will happen between the second and third draft, he’s optimistic that everything can get done between now and April, when City Council is scheduled to vote on the code. “We’ve heard a lot since January, and I think people have sort of spoken what their positions are. And, granted, we’re not going to make everybody happy, but I think we can address some of the concerns out there,” he said. “The key is to make sure we’re really addressing Imagine Austin and really providing a diversity of housing across the city. I think we did a better job with that [in draft two].”

For more on draft two’s release (and, you know, what’s in it), see next week’s issue – or scope out this week’s feature, a conversation with the Chronicle about the macro issues of land use with Mayor Pro Tem Kathie Tovo and Council Member Greg Casar.