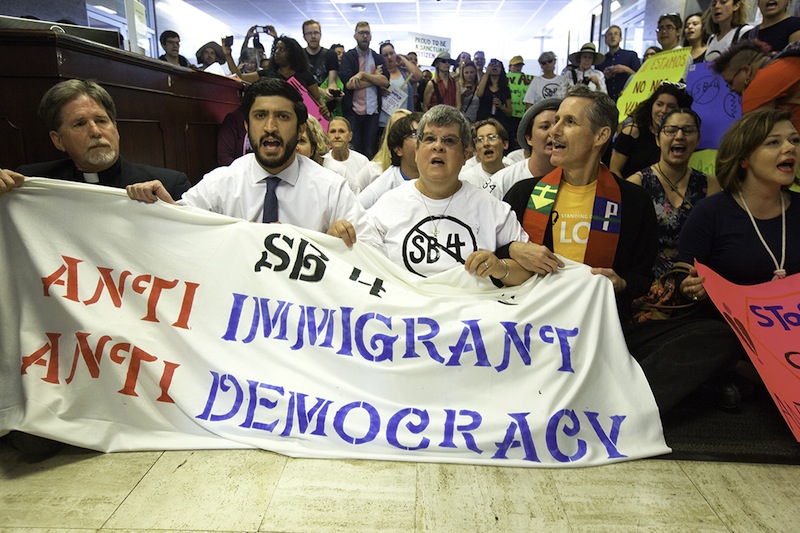 Community leaders protest SB 4 at the governor's offices in May. (Photo by Jana Birchum)

In a blow to the state’s crusade to inject fear in the immigrant community, U.S. Judge Orlando Garcia temporarily struck down major portions of Senate Bill 4 on Wednesday, Aug. 30.

Trump’s Department of Justice-backed SB 4 aims to punish so-called “sanctuary cities” and turn local law enforcement into a federal immigration deportation force. It’s widely considered one of the harshest immigration laws in the country and underscores the conservative-led fight to marginalize and threaten minority communities. While the judge issued a preliminary injunction, preventing the discriminatory law from taking effect today (Friday, Sept. 1), advocates and attorneys are hopeful they will eventually succeed in permanently slapping down the law as the lawsuit proceeds.

But for the time being, state law enforcement agencies won’t be required to comply with all U.S. Immigrations and Customs Enforcement detainer requests and hold undocumented immigrants based solely on ICE requests, a provision in SB 4 that if violated, would have resulted in criminal penalties. Local officials who “endorse” policies that run counter to SB 4 could have seen hefty fines and even removal from office. Garcia found those rules in violation of Fourth Amendment rights, writing that they could lead to “arbitrary and discriminatory enforcement.” That’s a relief to APD Chief Brian Manley, who testified against the law, and Travis County Sheriff Sally Hernandez, vilified by Gov. Greg Abbott and SB 4 bill author Sen. Charles Perry for her decision to limit cooperation with some ICE detainer requests. Shortly after Garcia’s ruling, Hernandez issued a statement saying she was “pleased” by the ruling. “I believe that local communities are stronger and safer when justice and security are a reality, not for some, but for all. I look forward to the ultimate resolution.”

Citing “viewpoint discrimination” and First Amendment protections, Garcia also put a stop to punishing local officials for speaking out against the law, an issue Austin officials have experienced firsthand. (He pointed out that under SB 4 it was perfectly fine to support the law, but that speech critical of the law would unfairly see rebuke.) After Mayor Steve Adler, Council Member Greg Casar and others publicly chided SB 4 as unconstitutional, state Attorney General Ken Paxton filed pre-emptive suit against city and county leaders based largely on their disapproving comments. (U.S. Judge Sam Sparks dismissed that frivolous case.) “Censoring officials would disserve the public interest and create a serious disconnect between local officials and the communities they serve,” Garcia wrote.

Travis County Judge Sarah Eckhardt, who saw backlash from Abbott when he pulled $1.5 million in vital state grant funding for the county, expressed gratitude for the ruling. “Judge Garcia correctly realized that SB 4 is an unconstitutional ‘solution’ in search of a problem that would ultimately make Travis County and all of Texas less safe,” she said in an emailed statement. “Hopefully this is the first step in consigning SB 4 to the dustbin of history.”

While he threw out the bulk of SB 4, Garcia noticeably failed to strike down the “papers, please”-style provision in SB 4 that allows local individual police officers to inquire about the citizenship status of those they lawfully detain or stop and deliver any information discovered to federal immigration authorities. However, immigration rights advocates say while the omission is a bit concerning, it shouldn’t be reason to worry.

“These two provisions left in place largely replicate what is in existing law,” said Thomas Saenz, president and general counsel of the Mexican American Legal Defense and Educational Fund (MALDEF), SB 4 suit plaintiff attorneys, during a Thursday morning press call. “Police may not arrest anyone based on information received about immigration status or cooperate with federal immigration authorities by turning someone in based on that information.” Officers are still not allowed to pull anyone over based on suspicion of undocumented immigration status (i.e., racial profiling) or unnecessarily prolong an otherwise lawful stop for the purpose of inquiring about immigration status. Further, everyone has a right, and in fact, “can and should” refuse to answer questions about immigration status posed by police or deputies, stresses Saenz. And officers should “think hard” before asking in the first place, he said, as it could “undermine the legitimacy of a stop” and drive a wedge between officers and the community.

MALDEF’s Nina Perales laid out what the ruling means for communities: Cities and counties can continue to exercise the ability to “set priorities for their law enforcement officers that are focused on public safety and that conserve local resources.” In short, localities are back in control when it comes to how they approach immigration, at least for now. That’s because the road hasn’t ended for SB 4; the ruling is a first step in a longer process. While key provisions have been temporarily halted, a full determination on the legality of the law will probably take several months, if not a year. And you can count on Paxton to battle the ruling in the interim; he’s vowed to “defend the constitutionality” of SB 4 and has already sought an appeal to the 5th Circuit, meaning the fate of SB 4 hangs in the balance. Paxton could ask the appellate court to block the ruling, for instance. In that scenario, Perales says plaintiffs would be busy filing briefs to convince the court otherwise – but if the 5th Circuit complies with Texas, the law could take effect. However, that’s down the road from today.

Casar, who faced arrest for protesting against SB 4 in May, said after the ruling that “the battle is far from over,” but that Texans should count this week’s decision as a victory. “We know we have a long way to go to protect everyone’s rights from the constant attacks by the Trump and Abbott administrations,” he wrote. “Tomorrow, we will continue to fight for the basic rights of our families. But today, we should celebrate the power of the statewide movement we have built together.”

In the meantime, attorneys are optimistic in their chances the courts will ultimately eradicate SB 4 for good. “It’s our view that the entirety of SB 4 will be ruled unconstitutional and never take effect in the state of Texas,” said Saenz.