Harvey Evacuees Not Going to Convention Center After All 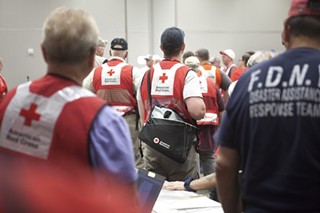 Red Cross volunteers and staff receive orientation for deployment at the Convention Center on Monday. (Photo by Jana Birchum)

Austin’s Convention Center will not serve as a “mega shelter” for Harvey evacuees after all. While crews prepared the Downtown building for the arrival of potentially 7,000 guests on Thursday morning, the state updated its request for Austin with numbers now anticipating only 1,500-2,000 incoming folks.

With numbers and plans still very much in flux, City Council on Thursday morning approved two 30-day leases for a warehouse and office space at 7000 Metropolis Drive, in that triangle of Southeast Austin between Burleson Road, Highway 183, and Ben White.

According to interim City Manager Elaine Hart and Juan Ortiz, the director of Austin’s Office of Homeland Security and Emergency Management, this newly identified space is a better alternative for evacuees based on current uncertainties, including exactly how many people will take sanctuary in Austin, their length of stay, and the ways in which evacuees will be arriving. The space at 7000 Metropolis totals 160,000 square feet, making it more scalable in size, said Hart. It also features plenty of parking – enough to install temporary showers and accommodate buses and cars should evacuees choose to drive themselves.

Though the two leases (one, with the original owner of the property, and another with a tenant currently renting 64,000 square feet of the warehouse space) will last for 30 days, both will have the option to extend, month by month, for an additional seven months. Council anticipates the two leases costing no more than $1,016,480 – money the state will reimburse. Ortiz told Council that the city will begin consolidating temporary shelters at Austin ISD campuses as quickly as possible, starting first with teaching facilities. By the end of the weekend, all evacuees currently residing in Austin will be relocated to the new space. Ortiz also confirmed that numbers dropped because many people affected by Harvey are seeking shelter closer to their homes.

CM Delia Garza, whose district encompasses 7000 Metropolis, voiced concern over the safety of the warehouse and its distance from the city’s core, but Lauraine Rizer of the city’s Real Estate Services assured her and her colleagues that the space is “100 percent safe” for people to stay there. The city is currently working to install coolers in the portion of the building that does not already have air conditioning.

Earlier this week, AISD and Mayor Steve Adler announced that Austin schools will welcome all student evacuees “for the foreseeable future.” 7000 Metropolis, Garza noted, falls into the Del Valle school district. Ortiz confirmed that the city is “working on” reaching out to DVISD as well. “In my opinion this is not the best place for a shelter, but I appreciate that you said you’ve looked everywhere and [determined] this is the best option,” Garza said shortly before the dais approved the lease.

Hart concluded it’s unclear “how long we’re sheltering these folks for, and how many people will be here. This site literally offers us a better way to serve those people when they do get here.”

How to Help After Harvey
Donate, send goods, foster a dog, do your part