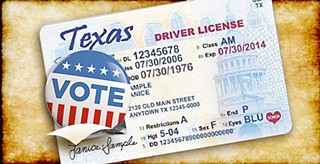 First congressional redistricting; then, in short succession, voter ID and the state House maps. In less than two weeks, the Republican-dominated Texas Legislature has been dealt three critical blows to their legal fights to retain voter laws and districts that the courts have now found discriminate against the state‘s minority voters.

Ramos laid out in her ruling how she had originally ruled against SB 14 in 2014 because it discriminated against Hispanic and African-American voters. It demanded a limited list of permissible photo IDs before a citizen was allowed to vote in Texas, and she found that voters in minority groups – as defined and protected by the Voting Rights Act – were significantly less likely to have such articles of identification. Both the state and the court agreed on an interim rule set for the 2016 election cycle; basically what was passed this year as SB 5. However, the court had previously told the state that the interim rules did not resolve either purposeful violations of the VRA, or related constitutional issues.

With Wednesday’s ruling, the judge confirms what the plaintiffs (including the NAACP and the Mexican American Legal Defense and Educational Fund) had long contended: that both SB 5 and SB 14 were purposefully designed to discriminate against protected groups of minority voters. Moreover, the constitutional issues can and do apply to all legally registered voters who are blocked from casting their ballot because of a lack of ID, regardless of ethnicity.

Addressing the ruling, Danielle Lang, senior counsel for the Campaign Legal Center, wrote: “It doesn’t matter how many times the state tries to dress the law in sheep’s clothing – its intent is to discriminate and prevent hundreds of thousands of eligible voters from casting ballots. Now, Texas must return to nondiscriminatory ID practices in voting, which do not require photo ID.”

If Gonzales Ramos’ ruling wasn’t enough bad news for the state’s side, Thursday saw a second blow, from the federal court in San Antonio that had recently ruled that the state’s congressional maps were designed to suppress the impact of minority voting. The three-judge panel also found that multiple state House seats redrawn in 2013 to supposedly correct illegalities in the maps originally drawn in 2011 still violated both the VRA and U.S. Constitution. Moreover, the court found that (as with the congressional seats and the voter ID bill) the discriminatory results of the bill were not accidental, but rather deliberate and intentional; legislators had been warned about these issues before its passage.

The bulk of the nine seats being rejected by the court are in the Dallas-Fort Worth metroplex: House Districts 103 (held by Democrat Rafael Anchia), 104 (Democrat Roberto Alonzo), and 105 (Republican Rodney Anderson) in Dallas County, and HD 90 (Democrat Ramon Romero) and 93 (Republican Matt Krause) in Tarrant County. In addition, the court has rejected HD 54 (Republican Scott Cosper) and 55 (Republican Hugh Shine) in Bell County, covering Temple and Killeen; as well as HD 32 (Republican Todd Hunter) and 34 (Democrat Abel Herrero) in coastal Nueces County. Of course these may not be the only districts affected: The replacement maps must reach minimum constitutional standards, and may well have to redraw surrounding districts to reach that level.

The court has given Attorney General Ken Paxton three days to inform the judges whether the state will convene a legislative special session to tackle redistricting. Failing that, the court will meet again on Sept. 6 to consider alternate maps developed both separately and (if they so choose) jointly by the plaintiffs and defendants.

That all said, it looks like the court may not have to wait too long for a response. Paxton has already announced that he will appeal the congressional ruling to the U.S. Supreme Court, and has now said he will appeal the House ruling – plus he has already filed an appeal against the voter ID ruling (which he called “outrageous”) to the 5th Circuit Court of Appeals.

This fight will clearly continue on, but the last week has given the Texas Democratic Party cause for a little celebration. State party chair Gilberto Hinojosa wrote that “Jim Crow-era tactics have kept Texas Republicans in power. From discriminatory gerrymandering to discriminatory voter ID laws, it has become entirely clear that Texas Republicans are rigging our election system.” Austin Democrat Rep. Eddie Rodriguez, quickly becoming the face of Travis County’s delegation, echoed those sentiments, stating: “From forcing unnecessary voter ID laws through the legislative process to rigging our elections using gerrymandered electoral maps, Texas Republicans have shown they must cheat in order to win.”