City Council is holding budget hearings later this afternoon, with testimony expected on the proposed property tax rate, any fee changes, etc. Criminal justice advocates say they will be there to oppose the current Austin Police Association contract, and demand greater accountability over officer misconduct. 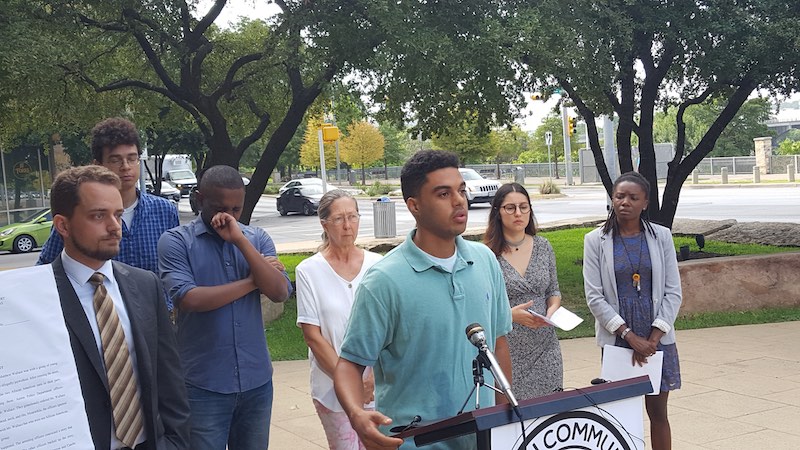 At a morning press conference prior to the Council meeting, Matthew Wallace, accompanied by attorney Brian McGiverin, described his November 2015 arrest by Austin police officers, allegedly for “jaywalking” across Red River Street near Sixth. Wallace described being attacked, kneed, and punched by police that night, and recounted his arrest on a charge of “resisting arrest.” Those charges were eventually dropped by prosecutors.

Wallace’s lawsuit, calling for compensatory and punitive damages, is the second such suit to arise out of the original incident. The first was filed by Jeremy King and Lourdes Glen, arrested at the same time, King for allegedly jaywalking and Glen for recording the encounter and objecting to the officers’ conduct. ("APD Jaywalking Arrest Sparks Outcry," Nov. 13, 2015.)

The incident became widely known after a video was released showing the arrests, including the aggressive use of force on Wallace, as well as the presence of several other people, all of them white, none of whom were arrested – although they were among the same group of people and crossed the street at the same time. King and Wallace are African-Americans; Glen is a Latina.

None of the officers involved were disciplined, after supervisors accepted their version of the incident and specifically that King and Wallace were the only people illegally crossing the street. Listed as defendants are officers Daniel McCameron, Nathan Canche, Jared Retkofsky, Gustave Gallenkamp, Brian Huckaby, Vanessa Jimenez, and Michael Cowden. They are accused of either being involved in the original unlawful arrest or else taking part in the coverup that resulted in no department discipline for the arresting officers.

Wallace is suing the defendants for excessive force and for violating his right to equal protection under the law.

Supporting Wallace were representatives of several criminal justice advocacy groups, among them Counter Balance: ATX, Texas Criminal Justice Coalition, Austin Justice Coalition, and Grassroots Leadership. They declared their opposition to the existing APA union contract, saying that it does not require adequate accountability for offending officers (“Double or Nothing,” May 26). They said current contract negotiations are not making progress on those issues, and they would ask Council today to reject the contract and “reset” the entire process.

McGiverin said he considers the current contract, despite its negotiated creation of the Office of the Police Monitor and the Citizen Review Panel, as effectively “toothless,” without serious enforcement authority. Should the city return to no union contract and only Civil Service provisions, McGiverin said, it would serve as an opportunity to “start over” and push for substantive officer accountability.