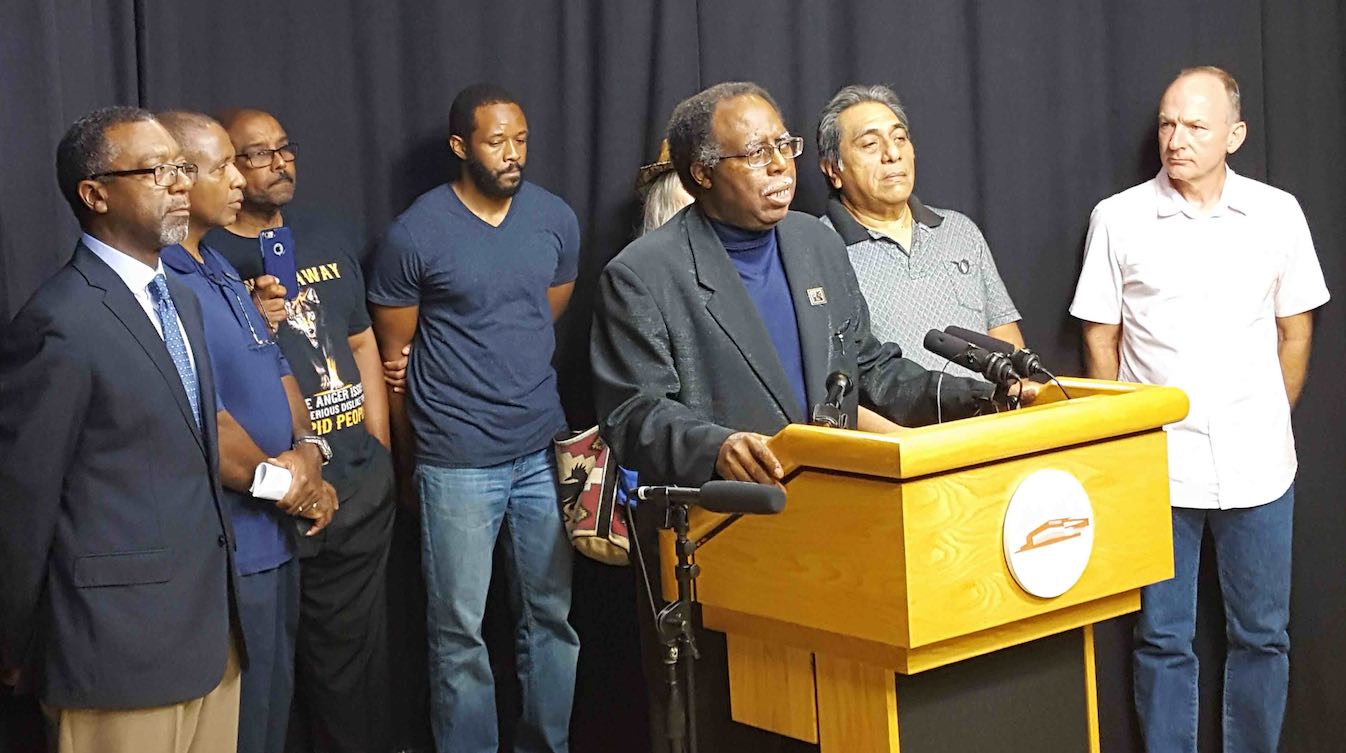 The press conference, held in the City Hall media room while Council was in session down the hall, was intended (reads the press release) “to challenge the Austin City Council and the Austin business community to fund the ‘Spirit of East Austin’ and the ‘Mayor's Task Force on Institutional Racism.’” The specific impetus, said Linder, was Mayor Adler’s recent announcement of a “Downtown Puzzle” initiative proposing to use funds raised from a potential increase in the Hotel Occupancy Tax to address homelessness issues Downtown.

“The mayor is responding to the Downtown Alliance” in his homeless initiative (“which I support”), said Linder. “We’d like him to be responsive to our needs as well,” Linder continued, summarizing the ongoing needs of the black, brown, and other minority communities.

Linder said that the mayor and city officials appear to prefer appointing task forces and commissions – “task force after task force after task force” – to review problems and make recommendations, without then carrying through action on those recommendations. “I commend [Mayor Adler] for a lot of meetings and a lot of conversations. He talks to a lot of people. But after three years [Adler was elected in 2014] that’s not good enough.” Citing the expectation of a mayoral re-election campaign in 2018, Linder said, “We’re going to be asking, where’s the results?”

“I think the mayor has met and talked with nearly everybody in town,” said Linder. “And that’s a good thing. But talk is not enough.” In addition to the Spirit of East Austin initiative (organized under previous City Manager Marc Ott) and the Task Force on Institutional Racism, Linder mentioned the various Quality of Life reports prepared over the years, which he said had never received the substantial funding necessary to carry out the recommendations.

Linder said the mayor and the city needs to “quit having these task forces and conversations,” and instead “send money” to the organizations serving poor and minority residents.

“We know what to do, and we’ve told them what’s needed,” Linder said. “We need them to give us the money to do what’s needed.” He mentioned job creation and affordable housing initiatives as underfunded throughout the city, and said that East Austin infrastructure had been neglected for decades and needs real funding.

“We can’t address it without money,” Linder reiterated. “This is a clarion call to the city to address the impact of institutional racism.”

Linder also criticized the currently proposed city budget (and interim City Manager Elaine Hart) as not including sufficient funding for minority needs. Asked what he would change in the proposed budget – which currently includes only $5 million for new Council initiatives – to better reflect his priorities, Linder responded, “The first thing we need to do is redefine ‘public safety.’ Public safety isn’t only police and fire protection; public safety includes improvements in quality of life and infrastructure that make a safer community.”

Linder, who was accompanied by a group of NAACP supporters and other local activists, also challenged the business community, including the Downtown Alliance and the Real Estate Council, to do more to invest in minority communities. “Where are you in this equation?,” he asked. “You make a lot of money from poor people in this community – poor people get nothing from you.”

More from the press release:

This is in direct response to the Mayor's announcement concerning the allocation of resources to alleviate the homeless problem downtown with the support of the Downtown Alliance and other business interests in Austin. This initiative comes at a time when African Americans and other people of color are being further displaced from the City of Austin. It also comes at a critical time when important recommendations to address disparities in the African American community in the areas of Economics, Employment, Neighborhood Sustainability, Health, Art, Culture and Entertainment and Police and Safety lack the proper financial support. …

We commend the Mayor for his outreach to various organizations and populations, yet the resources required to revitalize the "Spirit of East Austin" and his subsequent "Task Force on Institutional Racism" are virtually non-existent and ring a familiar tone of promissory notes that are insufficient to address the disparities cited in the African American Quality of Life Initiative, the Spirit of East Austin, and the Task Force on Institutional Racism.

We also challenge interim City Manager Elaine Hart to invoke the powers inherent in the City of Austin's Council-Manager form of government and allocate emergency financial resources to address the needs identified by the African American Resource Advisory Commission and all commissions that are facing disparate impact challenges in the City of Austin.

We also challenge the entire Austin City Council to examine measures to alleviate Austin's status as perhaps the most economically segregated city in the United States.