Returning from its July hiatus, City Council zipped through a 120-item agenda like the proverbial hot butter-knife, concluding even before music and proclamations. In the mix, they honored a former council member, took a small step toward desegregation, and permitted a gourmet party on Third Street. 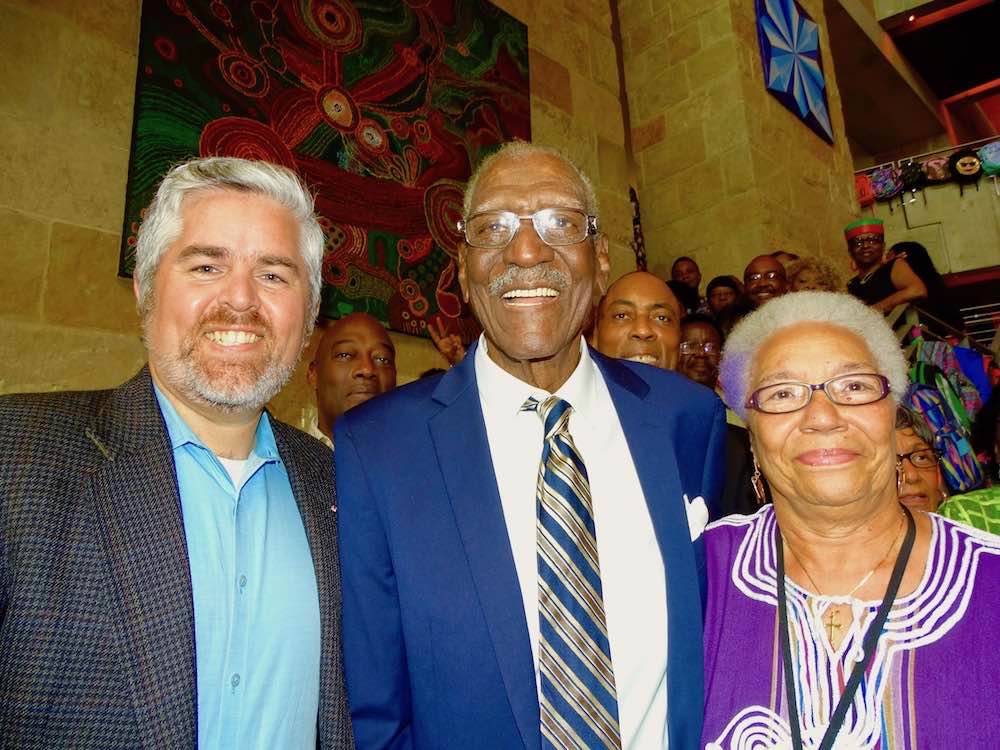 The emotional high point of the day, late Thursday morning, was the historic acknowledgment of former Council member Berl L. Handcox Sr., officially described as the “first African-American Council member elected under the Manager-Council form of government.” That was a bureaucratically polite workaround for Handcox’s tenure (1971-75) as the first black member elected following desegregation. In a larger historical context, it’s worth recalling Henry Green Madison (1843-1912), appointed to Council exactly a century before Handcox's ascension (1871) by Reconstruction-era Gov. E.J. Davis, and William G. Wilson, elected to Council in 1883. (The original Madison family cabin is preserved in Rosewood Park.)

There followed a century-long shadow.

The recognition of Handcox was initiated by his friend and successor, District 1 Council Member Ora Houston, who briefly choked up as she told him, “I stand on your shoulders.” Her co-sponsor was D6 CM Jimmy Flannigan – Handcox has lived in what is now District 6 for 40 years, and it had been decided that lending his name to Water Treatment Plant No. 4 (located in District 6) was particularly suitable to his Council career. (The Council action initiates the naming process, subject to public review.)

On Council, Handcox had worked to improve East Austin infrastructure – particularly the Walnut Creek wastewater treatment plant, which had been a noxious nuisance – and the resolution reads, in part: “Austin’s newest water treatment plant, currently called Water Treatment Plant 4, which was completed in 2014, is evidence of Council Member Handcox’s legacy, as it boasts an unprecedented environmental commissioning process that protected the environment both during construction and into the future, confirming Handcox’s passion to provide Austin with environmentally sound water and wastewater treatment infrastructure.”

In another noteworthy action, Council moved to address segregation in housing, although the effects of the resolution, sponsored by D4 CM Greg Casar (co-sponsored by Mayor Steve Adler, D2 CM Delia Garza, and D3 CM Pio Renteria) might take a while to eventuate. In brief, Council directed staff to take account of geographic and economic distribution when evaluating affordable housing projects for state tax credit programs or other city incentive programs, and to find ways to emphasize “moderate- to high opportunity or gentrifying areas” (i.e., better neighborhoods).

Discussing the resolution, Casar noted the necessity to balance the sheer need for more affordable units with the desire to encourage affordable housing citywide. “We are short on affordable units, and we also have a segregation problem,” Casar told his colleagues. “Those are related issues, but they are separate, and we have to be trying to deal with both, trying to deal with integration and with the shortage of units.” Accordingly, the resolution directs that future affordable housing projects requesting city approval of tax credits be evaluated, in part, that they be “consistent with the Fair Housing Act” and related city standards.

Finally, Transportation Director Robert Spillar was grilled a bit, primarily by Mayor Pro Tem Kathie Tovo, concerning the Department’s then-upcoming Saturday (Aug. 6) closure of a block on Third Street for a restaurant-sponsored, Second-Street District “White Linen Night” – a gourmet party featuring a dress-up theme borrowed from New Orleans a few years ago. Tovo wanted to know why a paid-admission party ($50-$75, for selected nosh-&-drink) would be closing a city street (nearly all day) for a city fee of about $600. Spillar responded that the event does support a nonprofit (the not exactly charitable* Food and Wine Alliance).

More to the point, said Spillar, the city would receive 4.5% kickback on admissions. Although the excuse for a Downtown party seemed harmless enough, Tovo was skeptical, and D7 CM Leslie Pool said she would abstain – but neither wanted to derail an event scheduled for only two days later. (The matter might be revisited in connection with other "special event" standards.)

Daily News has asked for an accounting of Saturday night’s White Linen gate and the city’s consequent percentage, and we’ll update when we get the numbers.

Update:The Transportation Department reported Wednesday that the city received $1,089.80 for its 4.5% of the White Linen Night gate receipts. That would peg the total take from event at $24,218 dollars. Congratulations to all.

Today (Tuesday, Aug. 8) Council has its regular work session, and Wednesday, Council resumes deliberations on the proposed city budget, officially laid out by staff last week. (They’ll also set the theoretical “maximum” property tax rate.) Thursday’s regular meeting (Aug. 10) features an unusually light, 33-Item agenda, although there are a few disputatious matters: the Aquatic Master Plan returns (officially for approval, likely for postponement), there will be more discussion of the search for a new City Manager, and the afternoon features a public hearing on Austin Energy’s long-range plan (always ripe for environmental contention).

*Editor's note: Representatives from the Austin Food & Wine Alliance took issue with Michael King’s parenthetical aside in this column that the AFWA was “not exactly charitable.” We’ve printed below and in full the letter sent to us from Executive Director Mariam Parker.

On behalf of the Austin Food & Wine Alliance, I would like to address some of the statements presented in the Austin Chronicle’s “Night of White Linen” online article on Tuesday, Aug. 8.

In reference to the comment “(the not exactly charitable Food and Wine Alliance), I would like to confirm that the Austin Food & Wine Alliance is a registered 501(c)3 non-profit and our mission is as a charitable organization that gives back to the Central Texas community through grants, educational programming and events. To date, the grant support given back to culinary projects equals $142,500 for the last five years.

Our mission as a non-profit organization is to foster awareness and innovation in the Central Texas culinary community and we are indeed, a charitable organization.

When the 2ND  Street District reached out to us to be the beneficiary of the White Linen Night event this year, we agreed to participate as it helps raise awareness of area restaurants and businesses thus being aligned with our mission. Money raised from this event is used to further our educational programs and our efforts to give back to our community through grants.

Additionally, we annually host the Culinary Arts Career Conference which allows 600+ area high school culinary students a day of education and interaction with chefs and culinary professionals. This is provided free of charge to students due to our fundraising efforts. Since 2013, we have hosted three of these conferences impacting more than 1500 high school students from 25 Central Texas high schools. We are slated to host our next conference in October and we expect our largest turnout yet.

On a side note, we recently had the pleasure to partner with the Austin Chronicle to host a fundraiser for former Food Editor Virginia B. Wood. We were able to rally area restaurants and bakeries to donate their goods in order to raise over $7,400 to help with her medical expenses. 100% of these proceeds benefitted Virginia. We were excited to rally the food community to give back to Virginia for the many years she promoted Austin’s food community.

We take objection to this categorization as “not charitable” as this kind of statement can be a detriment to future donations and sponsorships that help grow our programs and make a positive impact to our community. We would greatly appreciate you all setting the record straight.

I am happy to answer any questions to help clarify our purpose and impact in our community.