Mayor Not Losing Sleep Over a Few Nazis 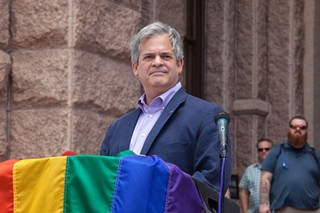 Mayor Steve Adler has drawn the ire of a popular white supremacist website after he invited transgender military members to join the Austin Police Department in the wake of President Trump’s currently toothless ban on their service.

“Austin’s Jew Mayor Demands Tranny Police Force,” wrote author Goy Orbison (which we cannot imagine is his real name) in a crass, anti-Semitic July 31 post on the Daily Stormer. A Southern Poverty Law Center-designated neo-Nazi hate group, the website’s leader, Andrew Anglin, is credited with helping rally white nationalists behind the Trump campaign. SPLC, which describes the web forum as “the leading extremist website in the country,” sued the publication for its call to threaten and harass a Jewish woman last year.

Adler’s spokesperson Jason Stanford told the Chronicle that the mayor doesn’t plan “to lose any sleep if this upsets a few Nazis … Austin is the safest big city in Texas partly because we know that our differences make us stronger. If that means trans troops can help us here in Austin, that’s great.”