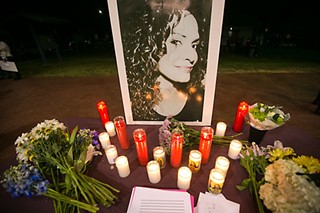 A vigil for Monica Loera in February 2016. (Photo by Jana Birchum)

The Austin Police Department will soon roll out mandatory training on serving LGBTQ, transgender, and gender nonconforming communities for all 1,845 sworn officers.

Sergeant Michael Crumrine, president of the Lesbian and Gay Peace Officers Association, and Charles Loosen, APD’s LGBTQ Community Liaison, presented a draft of the upcoming training to community members and queer organization leaders, including Out Youth, allgo, and AIDS Services of Austin on Monday evening (July 31). Crumrine laid out the three-hour training session’s four learning objectives: understanding LGBTQ history, examining the multifaceted relationship between trans and queer folks and law enforcement, the importance of language (regarding gender identity and sexual orientation), and finally, introducing officers to the department’s updated guidelines for probable cause affidavits and report writing. Moving forward, APD will adopt “victim-neutral” affidavits that remove the name and gender of violent crime victims for anonymity and reduce the potential for error by allowing officers time to confirm gender identity. Legally, suspects must be identified in reports by the name found on their birth certificates, but the new directive will instruct officers to use the legal name only once before adding the known-by name and gender of the suspect.

The impetus for this training and the new reporting stem directly from Monica Loera’s murder in 2016. APD “did a horrible job misidentifying her to the community,” Crumrine admitted Monday. For over a week, friends were unaware of Loera’s murder due to her misgendering by APD and local news sources. In response, last May City Council passed a resolution instructing the city manager to evaluate APD’s policies on identifying trans and gender-nonconforming people. Fourteen months later, the training is almost ready.

Priscilla Hale, allgo's executive director, stressed the importance of addressing the intersectionalities of race and class, as well as tying the training’s learning objectives to APD’s code of conduct. Community members have been asked to return for the full training once it’s completed, though a second interim meeting may be scheduled. Loosen told the Chronicle they’re “hoping to roll the training out in early autumn.”