Congratulations, California investors and trendy millennial homeowners! Too long have you been vilified. But the Austin American-Statesman is here to put you in your rightful place, as saviors of the Eastside, nudging all those black and brown residents and business owners aside to make way for the glorious hipster coming. 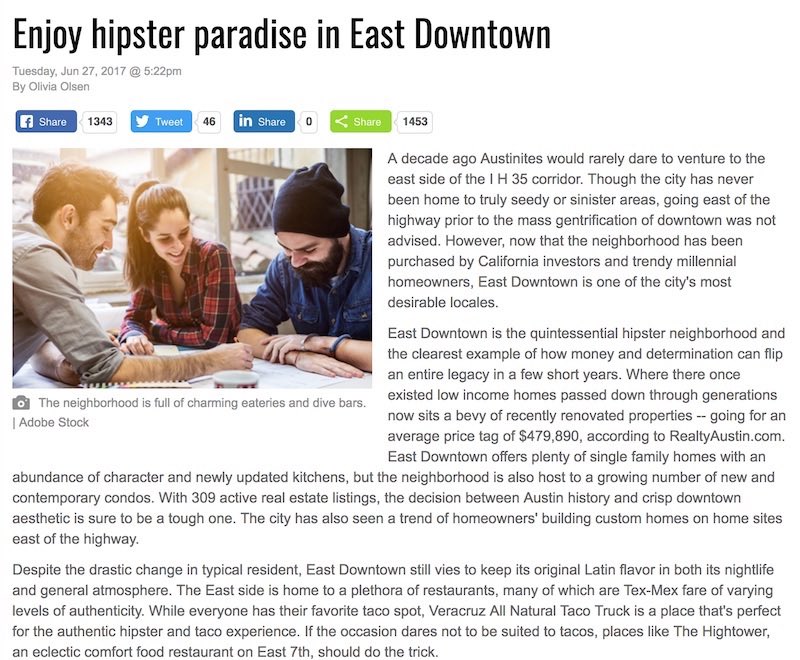 That was the coded message at least of a Saturday Statesman advertising supplement article touting East Downtown’s “hipster paradise.” Witness the opening graf:

“A decade ago Austinites would rarely dare to venture to the east side of the I H 35 corridor. Though the city has never been home to truly seedy or sinister areas, going east of the highway prior to the mass gentrification of downtown was not advised. However, now that the neighborhood has been purchased by California investors and trendy millennial home-owners, East Downtown is one of the city’s most desirable locales.”

“Though the current demographic of East Downtown swings more towards millennial hipsters with no children, the area’s surge in property taxes will have a great impact on the Austin Independent School District campuses in the area, particularly Johnston High School, priming it to be a top school by the time the area has a full teenage population to send it.”

Of note: Johnston High School closed in 2008. (It has since been repurposed as Eastside Memorial High School at the Johnston Campus.)

Social media response to the article has been fast and furious – Facebook user Gabo Jamail perfectly summed up his reaction with a photo of the story in print and his extended middle finger. Recognizing a PR crisis brewing, the Statesman replied in the user's comments with a preview of the editor’s note set to run in Monday’s issue:

“An article about East Austin in the advertising supplement Homes in Saturday’s paper had an unfair characterization of the neighborhood’s past. The story, which was written by a content marketing freelancer, did not receive the proper review before publication, and we apologize for the oversight.” 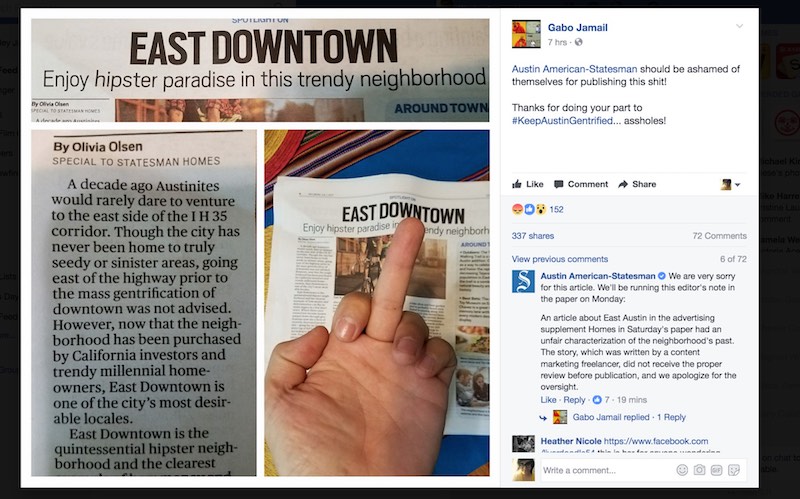 UPDATED 12:11pm: The Statesman has tweeted that it's taking the story down.

Monica, thank you for holding us accountable. The article is being removed online. This editor's note will appear in print. We apologize. pic.twitter.com/xb9LDf6ZCs