Live at the Lege

The Chronicle counts down to sine die 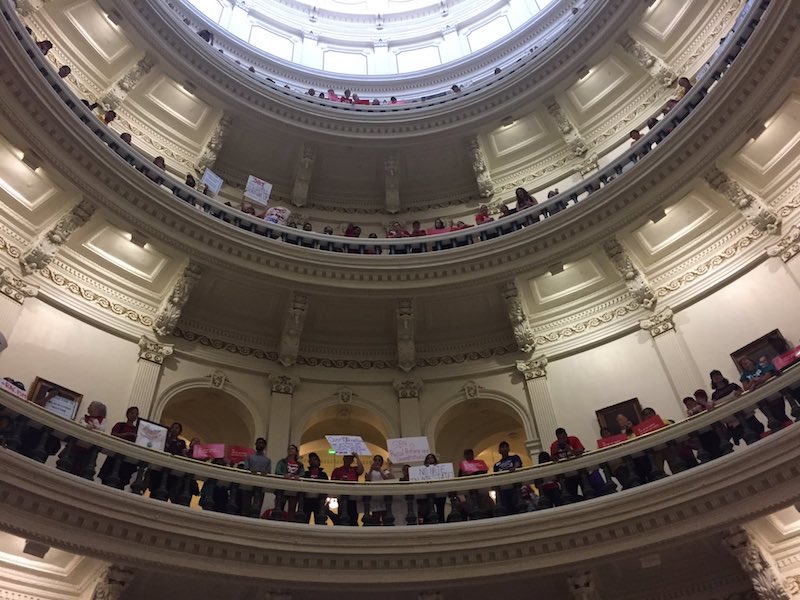 It's 2:45pm. Both chambers are adjourned, waiting word on a special session. We're checking out for the day. See this week's "Lege Lines" in the paper for a breakdown of the weekend, and Mary Tuma's Twitter feed for more from the anti-SB 4 protest.

The Senate just adjourned sine die. All that's left now is an announcement on the special session – and a resolution on today's drama: Here's Rep. Matt Rinaldi on his earlier dustup, via his Facebook page:

Today, Representative Poncho Nevárez threatened my life on the House floor after I called ICE on several illegal immigrants who held signs in the gallery which said “I am an immigrant and here to stay.” Several Democrats encouraged the protestors (sic) to disobey law enforcement. When I told the Democrats I called ICE, Representative Ramon Romero physically assaulted me, and other Democrats were held back by colleagues. During that time Poncho told me that he would “get me on the way to my car.” He later approached me and reiterated that “I had to leave at some point, and he would get me.” I made it clear that if he attempted to, in his words, “get me,” I would shoot him in self defense. I am currently under DPS protection. Several of my colleagues heard the threats made and witnessed Ramon assaulting me.”

We haven't seen any colleagues corroborate his story . . . Nevárez minced no words in response:

He's a liar and hateful man. Got no use for him. God bless him. https://t.co/te13An7gwm

Greg Casar is expected to speak at 2:30pm, just before Living United for Change in Arizona Communications Director Abril Gallardo, United We Dream's Alejandra Coreas and Alfonso Muñoz, Roberto Valadez-Peña from the New Mexico Dream Team, and others.

Music from ​Cecilia and the Broken Hearts & Kiko Villamizar rolls until 4pm.

It's not only fiery speeches. A band breaks into cumbia music to protest against the law.

Monica Roberts, human rights activist at #SB4 protest on GOP: "They fear your power at the ballot box...Register to vote b4 nxt Nov" #txlege

"And vote every Republican out of office including Greg Abbott, and flush Dan Patrick down the toilet too while you're at it" #txlege #SB4 https://t.co/RKQF3eXnXs

Ahmad Zamer, prez of of Arab-American Anti-Discrim. Cmte, a Muslim Palestinian, says his ppl recognize racism when they see it #txlege #SB4

Richard Whittaker is in the House, where Speaker Joe Straus just declared his desk clear and gaveled out. Sine die now in the House.

Straus calls #SINEDIE in the #txlege House. "Is there objection? I didn't think so."

When Straus announced the committee to inform senate and gov House was done, there was a cry of "Wolverines! Go get 'em!" #txlege

Mary Tuma tweets a little perspective on Rinaldi's antics: "In calling ICE on protesters, Matt Rinaldi proves how dangerous the law is; how it leads to racial profiling, false assumptions."

Tuma's outside getting ready for the SB 4 protest (see below). Inside, the House is rolling through a few menial resolutions. Senate stands in recess until 1:30.

The Mexican American Legislative Caucus called a press conference after learning that Rep. Matt Rinaldi, R-Irving, apparently told a group of Hispanic lawmakers that he called U.S. Immigration and Customs Enforcement on anti-SB 4 protesters this morning. Richard Whittaker was in attendance:

Richard Whittaker from the House: One sore point coming up in conversations with representatives this morning is the Senate's deliberate capsizing of the school finance bill, House Bill 21. The result of two years of careful negotiation, it was sabotaged by Patrick in the Senate. First, the Senate version threw out all the carefully crafted hold harmless provisions that would at least keep school districts solvent. Second, it demanded a voucher program, which the House had already rejected.

Then, the Senate cut the $1.6 billion required for the hold harmless to $530 million. And on top of all that, it didn't even create a funding mechanism. So that $530 million was actually a phantom. Funding its dedicated spending, including the $200 million set aside for school vouchers, would further cripple basic school funding.

As a result, lawmakers on the floor have been discussing not if, but when school districts will start going bankrupt, and which ones. The even darker conspiracy is that this is another stage in destroying local public education, and handing the shreds over to charters and private schools.

Anchia clarifies press conference is MALC and allies. "It'll be a sitcom. We just shot a 140 day pilot."

Sen. Robert Nichols, R-Jacksonville, was just named president pro tempore in the Senate a few minutes ago. Mary Tuma reports from the Senate:

From inside the Senate chamber you can hear #SB4 protestors outside chanting "This is what democracy looks like!" #txlege

A protest is planned for the South Steps of the Capitol at 1:30pm. U.S. Rep. Joaquin Castro will speak then. Austin City Council Member Greg Casar will address the crowd at 2:30.

And Gov. Greg Abbott has chimed in with a statement on the death of local ridesharing regulations. The governor signed HB 100 this morning. Via email:

"Texas has longtime been the home for innovation and economic growth, but a patchwork quilt of compliance complexities are forcing businesses out of the Lone Star State. My goal as Governor is to remove the barriers of government to encourage competition, and empower consumers to choose. This bill increases economic liberty while still ensuring customer safety, and I thank Representative Chris Paddie for his work on this legislation."

The Senate's working its way toward selecting a president pro tempore for the interim period, while the House rolls through its proclamations. Nobody appears in too much of a rush to get anything accomplished. Meanwhile:

Small child just whacked his head hard on the House brass rail while no one was at hand to prevent it. Multi-use metaphor for #txlege

From 10:45 this morning: Today (Monday) marks the final day of the 85th Legislative session – if we’re lucky. The threat of a special session looms: This morning during a public signing of House Bill 100, blocking local ridesharing regulations, Gov. Greg Abbott said he’ll make a decision on a special session later this week.

Chances are we’ll see one. Staff writer Richard Whittaker detailed why that’s the case in a post published earlier this AM. He’s down at the Dome today, along with colleague Mary Tuma, tracking developments as lawmakers inch toward sine die – midnight tonight.

The House gaveled in this morning at 10am. The Senate’s set to follow with an 11am gaveling. But already a grand assembly of protesters have assembled inside the rotunda. Tuma reports “a major protest” against the anti-immigrant Senate Bill 4, signed into law earlier this month, and a reappearance of the pro-choice advocates depicting characters from “The Handmaid’s Tale,” there to protest against anti-abortion package SB 8.

Tuma has more on the bathroom bill and its potential impact on a special session:

The long simmering tension between House and Senate leadership came to a very public head this weekend. With just a few days left on legislative calendar, right-wing Lt. Gov. Dan Patrick, unwilling to compromise with more moderate Republican Speaker Joe Straus, made clear via a pair of press conferences that the House’s version of the anti-LGBTQ “bathroom bill” wasn’t discriminatory enough and its take on property tax reform, too diluted.

“It’s absurd that bathroom bills have taken on greater urgency than fixing our school finance system,” responded Straus, highlighting his decision not to take the anti-LGBTQ proposal any further. Without the power himself to call a special session (only the governor can do that) and pass his priority bills, Patrick signaled he’d sabotage the process by forgoing a vote on five necessary “sunset” bills – legislation necessary to pass to keep state agencies open – to force a special and revive his property tax bill and target transgender residents. While the House is accusing Patrick of “purposeful inaction,” the lite guv blames the possible special on the lower chamber’s slow bill movement (but with that, fooling no one). In the end, it’s taxpayers who’ll foot the deadlock’s tab: Special sessions can cost up to $800,000.

And here’s a bit more of the anti-SB 4 scene down at the Capitol.