Bathroom and religious freedom bills both likely to become law

After four months fighting down bathroom bills, the Texas House finally caved to Lt. Gov. Dan Patrick’s threat of a special legislative session on Sunday. Shortly after 8:30pm, the House approved a proposed bathroom bill amendment to Senate Bill 2078 after an hour and a half of debate. 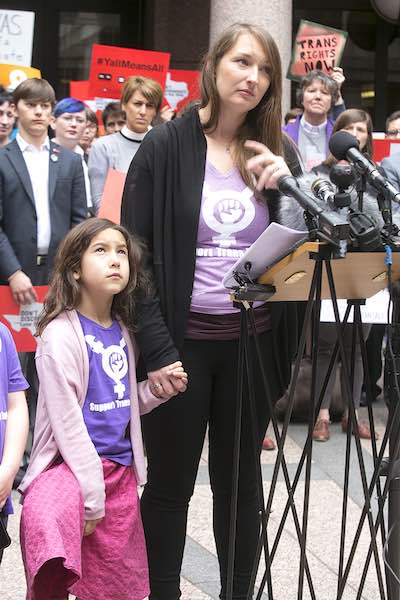 The original bill, authored by Sen. Larry Taylor, R-Friendswood, was intended to address school districts’ emergency response plans to natural disasters, active shooters, and “any other dangerous scenario.” But the bathroom amendment, added by Rep. Chris Paddie, R-Marshall, will also ban transgender children from using the bathroom aligning with their gender identity. Instead, those who don’t wish to use the facilities designated by the sex on their birth certificate will be given single stall restrooms and changing rooms. For some schools this policy will continue a status quo. For others, it will override ordinances that put in place trans-inclusive policies for their gender nonconforming students.

Paddie’s amendment will only affect schoolchildren (and presumably transgender adults visiting schools). According to House Speaker Joe Straus, this compromise will keep Texas from experiencing the “severely negative impact” of original anti-trans bathroom bill SB 6, which would have extended the law to all public restrooms, public schools, and universities.

For the entirety of the 85th session, Straus has denounced any and all efforts to approve a bathroom bill, despite Patrick’s and Gov. Greg Abbott’s insistence that these proposed laws would protect Texas’ cisgender women and children from sexual predators. Last week, however, Patrick declared he would ask Abbott to call a special session unless a bathroom bill was passed before sine die May 29. "If the bills don’t pass in the special and they’re blocked again, I will ask the governor to call us back again and again and again,” he threatened.

The House passed SB 2078 and its new amendment on second reading by a 91-50 vote. Rep. Sarah Davis, R-West University Place, voted against party lines. Straus released the following statement shortly after its passage: “Representative Paddie’s amendment will allow schools to continue to handle sensitive issues as they have been handling them. I believe this amendment will allow us to avoid the severely negative impact of Senate Bill 6. Members of the House wanted to act on this issue and my philosophy as Speaker has never been to force my will on the body. Governor Abbott has said he would demand action on this in a special session, and the House decide to dispose of the issue in this way.”

While the House debated discrimination in Texas schools, the Senate was discussing HB 3859. The religious liberty bill, filed by James Frank, R-Wichita Falls, would allow child welfare providers within the foster care system to deny adoption and fostering to LGBTQ couples, as well as Muslims and Jewish couples (and abortion services to pregnant foster youth) in the name of "sincerely held" religious beliefs. A little after 1am on Monday morning, the Senate passed HB 3859 on the third and final reading. It now heads to Abbott’s desk, where it should become law, and take effect Sep. 1.