Return of the Panama Hat

Council spends for roads, buys a robot, & has a brief Zimm flashback

With much of the tough action moving to budget prep, current City Council agendas are fairly light and adjournments relatively early. Nevertheless, last Thursday the dais did move forward on the Mobility Bond, worked through a brace of zoning cases, and somewhat grudgingly approved a Downtown rail plaza. 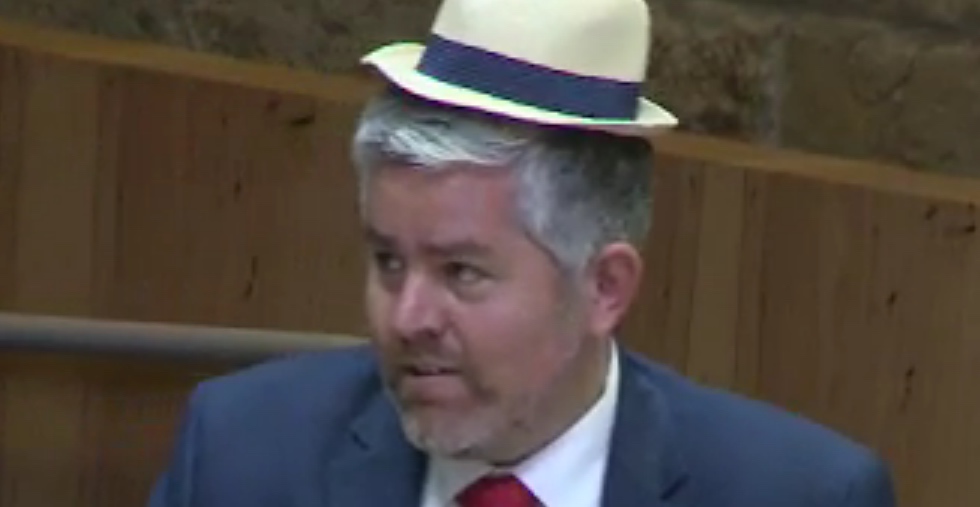 It was not quite a full dais last week (May 4), with District 2 Council Member Delia Garza out of town on Capital Metro board member business, but there were no items that came down to a swing vote. The agenda was sufficiently brief and uncontentious that it enabled a 7pm adjournment – although even that was misleading, as the meeting was elongated by a lengthy “executive session” intermission and a delay on a single item that carried beyond the evening’s music and proclamations.

The contentious Items were few. D1 CM Ora Houston and D8 CM Ellen Troxclair fussed a bit over the Transportation Department’s request for more “Smart Trips” funding – for an educational program designed to reach out to potential transit customers and persuade them that the rides are worth the effort to navigate the process. Neither Houston nor Troxclair were persuaded on the return-on-investment, nor that the program would benefit the outlying portions of their districts. D6 CM Jimmy Flannigan, who represents the most distant northwest reaches of the city, pointed out that every vehicle removed from the roads benefits every resident – especially those who are driving Downtown – but Troxclair and Houston were unpersuaded. The proposal passed 8-2 – there were several 8-2 votes on the day.

Transportation matters occupied much of the session, including the first major authorizations of funding for executing the various parts of the Mobility Bond approved by voters last November. The actions approved $39 million in spending on corridors, bikeways, and trails; authorized increased staffing in Transportation, Financial Services, and Small and Minority Business Resources to manage and monitor the funding; and approved another $70 million in funding for projects on north and westside highways. Long anticipated, those authorizations evoked no debate and passed on consent.

Rockier was approval for two more localized, related projects: 1) $500,000 to convert 5th St. to two-way lanes from Brazos to I35; and 2) $3 million for a joint project with Capital Metro for a public plaza and permanent rail station on 4th St. (necessitating the changes to 5th), and a major upgrade to the related storm drains. Those received more scrutiny, especially from Mayor Pro Tem Kathie Tovo, in part because of skepticism over the city’s acceptance of the storm drain burden for a Cap Metro project, and because the station would have no public restrooms – a particular Downtown goal for Tovo.

The project plan had initially called for restrooms, explained Transportation Department head Robert Spillar and others, but foundered on the cost of ongoing maintenance. Tovo was not persuaded, and managed Council support for a hortatory amendment for a future commitment to restrooms … once somebody finds the money. D5 CM Ann Kitchen, one of two Council reps on the Cap Metro board (the other is Garza), earnestly defended the agency, basically saying it is doing the best it can with the resources it has, and this is indeed a joint project. (Houston and Troxclair were the sole nays on both the 5th St. and rail station projects.)

That discussion was also the occasion for a brief avatar return of defeated D6 CM Don Zimmerman, whose signature headwear was a Panama hat. As chair, Mayor Steve Adler mistakenly addressed Flannigan as Zimmerman. To general merriment, Flannigan said, “I was prepared” (Adler had made the same mistake a few weeks earlier) and he pulled from beneath the dais a child-sized Panama that he perched precariously and briefly on his head.

Anyone needing other than a comical reminder of Zimmerman’s presence could visit his Facebook page over the weekend, as he celebrated the defeat of the Round Rock ISD school bonds. In Zimmerman’s world, those he opposes are never just wrong, they’re always corrupt. So he brayed: “Time to FIRE THE LIARS!!! Now the bureaucrat cockroaches will start hiding even as they start the blame game to accuse everyone else of the consequences of their own dishonesty.” On the dais, Zimmerman’s hat might be missed; may his venom be confined henceforth to other venues.

• In Loco Parentis? Set a public hearing for June 15, to consider extending the city's curfew for juveniles (under 17). The Austin Police Department recommends continuing the curfew, instituted in 1990 and subject to Council review (and tweaking) every three years. Setting a hearing is generally uncontroversial; but several witnesses asked for the June 15 date (instead of the proposed May 11) to allow better consideration and more time for witnesses. Ken Zarifis of Education Austin specifically cited the shadow of a “school-to-prison pipeline” for giving the law more thorough examination.

• Call Me a Robot: Council tentatively approved a privately sponsored pilot project for sidewalk “delivery robots,” a test-version by Starship Technologies; also approved was funding for a new, updated bomb disposal robot for APD, with almost all the money from federal and state grants. That proposal occasioned a strange colloquy with Houston, who wanted to know if the bomb disposal robots were insured against explosions of bombs. Well, um, no … came the answer, since bomb disposal is the robot’s literal purpose … (They do come with a five-year warranty.)

• Zoning is What We Do: Council postponed or dickered over a few zoning cases, and when in doubt – e.g., when the neighbors are worried about traffic, which is always – voted to approve on initial readings and take another look. They all come back around …

On Tap This Week: There was brief discussion of canceling this Thursday’s short-agenda meeting (May 11) – with only Kitchen arguing that if we postpone, it just means the next meeting is longer. By Friday, Mayor Adler posted to the Council message board that in light of previous public notice, Council will hold an abbreviated (2-5pm) meeting, dropping the usual ceremonial bits. Work session is Tuesday, with legislative and CodeNEXT updates, among other business that could take some time. At the moment, no Wednesday budget work session is posted.