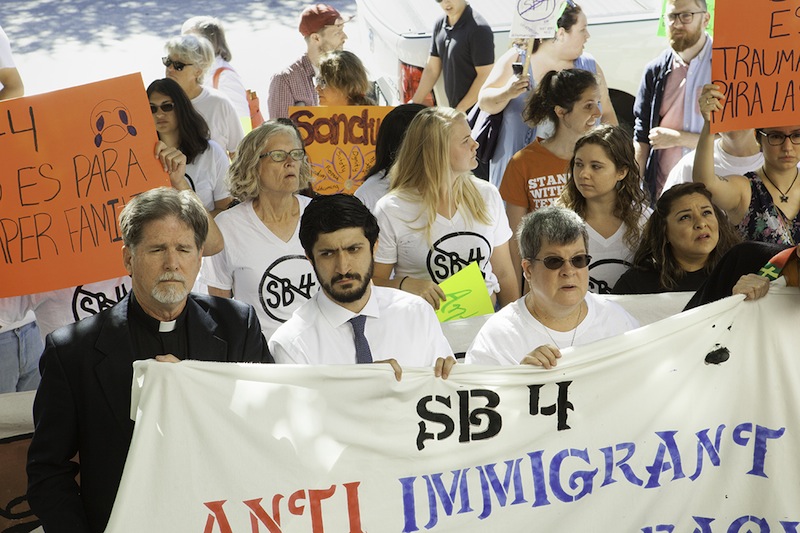 Just one day after Gov. Greg Abbott’s secretive signing of a bill that would punish so-called “sanctuary cities,” the state of Texas has stoked a legal battle against Travis County and the City of Austin in order to “uphold the constitutionality” of anti-immigrant Senate Bill 4.

As part of their argument against the County, attorneys cite the 142 detainer requests denied by Travis County between Jan. 28 and Feb. 3, 2017 – “more than any other local jurisdiction.” Yet those figures are severely inflated, as most of the requests were made prior to 2017, as the Chronicle previously reported.

SB 4 cracks down on city law enforcement leaders who don’t fully cooperate with U.S. Immigration and Customs Enforcement (ICE) detainer requests for undocumented immigrants and calls for the ousting of any elected or appointed official found in violation. A controversial measure tacked on by the Texas House of Representatives grants police the ability to ask for immigration status at detainer stops. SB 4 is slated to become law on Sept. 1. State attorneys are asking the U.S. Western District Court to find that SB 4 doesn’t violate the Fourth and Fourteenth Amendments and is not pre-empted by federal law – grounds by which groups may file suit.

Immigrant rights groups and cities, including Austin, have strongly hinted that they are geared up to challenge SB 4 in court. Seeing the writing on the wall, Paxton jumped on the opportunity to sue Austin before the city or MALDEF could put forth a legal challenge first. “Defendants flout the policies mandated by Texas law and object that the legislation is unconstitutional. On information and belief, Defendants will sue Texas regarding the constitutionality of Texas law.” According to Paxton, the filing is meant to avoid a “multiplicity of suits in various forums” so that the constitutionality of SB 4 can be resolved in a single court.

A leading face of the local resistance against SB 4, City Council Member Greg Casar responded to the suit in a statement shortly after it was filed: “Yesterday evening the Governor tried to hide from public accountability by signing this discriminatory bill on a Sunday night in his office. Then, the Texas Attorney General sued me and my colleagues for questioning the constitutionality of this immoral and unethical law,” said Casar. “Instead of complying with the Governor’s mandates, we will double down on our pro-immigrant policies. Instead of being silenced by the Attorney General’s threats, we will rise up and speak truth to power. The fight against Senate Bill 4 is just beginning.”

Saying they are “extremely proud” to stand with the “brave” officials of Austin and Travis County, Thomas A. Saenz, president and general counsel of MALDEF, also sounded off on the suit filed against his organization in a sharply worded statement. “This is a frivolous legal action, filed precipitously and without basis in the law. Rather than wait for aggrieved individuals and entities to pursue their many constitutional challenges to SB 4, the state bespeaks its own apparent high anxiety about the legality of Abbott’s Folly, SB 4, by seeking a pre-emptive strike through this lawsuit.”

“We will see you in court, Governor Abbott,” said Saenz. “In the meantime, we hope that both the governor and the attorney general will seek treatment for an apparent problem with premature litigation.”