One Dead in Officer Involved Shooting on Sixth Street

Police shot 24-year-old on Trinity Street at 2:42am

A 24-year-old man was shot and killed by Austin Police last night after the man fired a pistol on Sixth Street, engaged in a foot chase with Downtown officers, then attempted to shoot those pursuing officers after turning north onto Trinity Street.

The situation occurred after Downtown bars closed on Saturday. Patrol officers working the Sixth Street corridor heard gunshots in the area at 2:39am and radioed into police headquarters, where the department’s HALO (High Activity Location Observation) team, which monitors a series of cameras located around the entertainment district, reviewed recent footage to find video evidence of an individual pointing a pistol into the air and firing it outside of a bar. Officers received a description of the man’s clothing at 2:41am and officers found him moments later. Realizing officers were in pursuit of him, the individual broke off west on Sixth Street for half a block before splitting north on Trinity Street. From the scene a few hours later, interim Police Chief Brian Manley told reporters that officers then saw the man brandished a pistol, turned, and fired at the officers. Two officers returned fire, hitting the man, and subduing him. He was transported to a nearby hospital and pronounced dead at 3:08am.

Manley said APD has “evidence on the scene that lends to the facts as the officers have laid them out,” including bullet casings fired from a pistol consistent with the firearm the individual possessed throughout the incident, perhaps an indirect allusion to the adjusted details of APD’s April shooting of Lawrence Parrish. Manley said APD has recovered such a casing from two locations: outside of the nightclub where the first shot was fired, and on Trinity Street, where the shooting with APD took place.

Manley said one of the involved officers is a DTAC (Downtown Area Command) sergeant who’s worked with the department for 17 years. The other is an officer who has been with APD for seven years. Both have been placed on administrative duty while the department’s special investigations and internal affairs units complete their concurrent investigations into the incident, as is standard procedure with all officer-involved shootings.

The department does not expect any more updates on the shooting to be revealed this weekend.

Manley noted in a tweet sent around 7:30 this morning that he is “thankful our officers and innocent bystanders were not injured” – no doubt a heightened concern in a populated area like Sixth Street around closing time. That’s no place for gunplay. Had the foot pursuit not turned onto Trinity Street, this could have been much worse. 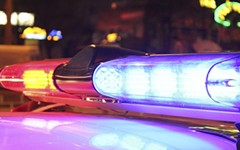