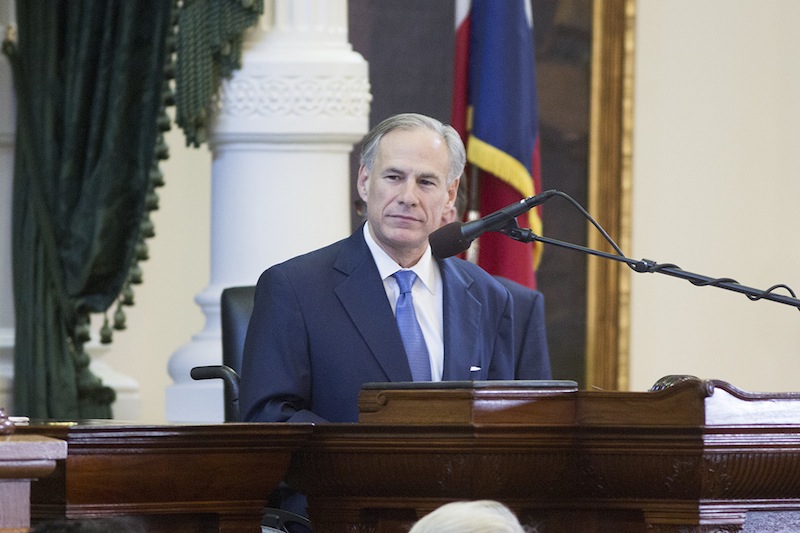 Offering no notice to media until after he signed the bill, Abbott only issued a press release and a video of himself via Facebook defending the legislation that attacks so-called “sanctuary cities." (The term carries no legal definition but refers to, in the eyes of Abbott, any municipality that isn't acting in lockstep with federal immigration policy.) The clandestine move assured no major citizen-led protests or demonstrations – like the all day sit-in at his offices last week – would prevent the governor from ushering the “Show Me Your Papers” bill into law.

"It seems fitting that Greg Abbott would sign this disgraceful bill on the internet on a Sunday night, far from the press and the public,” said Bob Libal, executive director of Grassroots Leadership. “But we will not be bullied by this law. Communities across the state are vowing that the resistance to SB 4 is only just beginning." Echoing the point, Stephanie Gharakhanian, legal director at Workers Defense Action, said her group is “saddened but not surprised that Greg Abbott chose to sign SB 4 in secrecy.” WDP will “fight against this law in the court and in the street until it is defeated," said Gharakhanian.

SB 4 imposes civil and criminal penalties on law enforcement leaders who fail to cooperate with U.S. Immigration and Customs Enforcement (ICE) detainer requests and allows police to inquire about immigration status of those that they detain. The law also allows the removal of any elected or appointed official who does not comply with the law. Two weeks ago the Texas House held a 16-hour debate on SB 4, where Democrats sought unsuccessfully to soften the extreme piece of legislation, before sending it to the Senate for final approval. The bill is often cited as racist and unconstitutional, and stood as one of Abbott’s major legislative priorities this session. Barring a court challenge, SB 4 will become law Sept. 1.

In his video message, Abbott took direct aim at Travis County Sheriff Sally Hernandez, who refused to comply with all (voluntary) detainer requests for undocumented immigrants earlier this year. “This law cracks down on policies like [that held by] the Travis County sheriff, who declared that she would not detain known criminals accused of violent crimes,” said Abbott. “Those policies are sanctuary city policies and won’t be tolerated in Texas.”

However, that’s not true. Hernandez does, in fact, honor ICE detainer requests for those who have committed serious violent crime, including murder, aggravated sexual assault, and "continuous” smuggling of persons. As a result of Hernandez’s policy, Abbott stripped $1.5 in grant funding from Travis County for mothers, children, and veterans' services.

Immigration-rights advocates, including the ACLU of Texas and the Mexican American Legal Defense and Educational Fund, have vowed to help fight SB 4 in court. “This is not the Texas I know,” said Terri Burke, executive director of the ACLU of Texas. “This racist and wrongheaded piece of legislation ignores our values, imperils our communities and sullies our reputation as a free and welcoming state. Our immigrant communities need to know that we stand with you; we will fight this assault in the courts, at the ballot box, and in the streets if we have to. This is an assault on humanity. It will not stand.”