UPDATE: Texas Department of Public Safety officers handcuffed then released at least 18 activists, including CM Greg Casar and Austin Pastor Jim Rigby, after they refused to leave the governor’s offices today. Following an all-day sit-in and protest against anti-immigrant bill SB 4, DPS officers forced journalists to exit the building when it closed at 5pm or face arrest, and blocked the entrance.

Inside, officers gave the protestors a verbal warning then began issuing class B misdemeanor citations for criminal trespassing. Those that did not leave after being cited were tied with plastic cuffs and processed by Judge Nicholas Chu. Event organizers said DPS officers “lied” by telling protesters their attorneys were not allowed in, a rule contradicted by Chu. Just before 7pm, the protestors were released from cuffs by DPS and addressed a growing crowd outside.

“We are not scared of being criminalized or marginalized because we stand on the side of immigrant communities, and we will fight this to the end,” said Casar shortly after being released. “What I learned and what I’ll never forget after sitting in that building is that this is the beginning; that this is not so hard and that we can do so much more.”

EARLIER: The lobby of Governor Greg Abbott’s office at the State Insurance Building morphed into a powerful site of protest Monday, as roughly 30 activists, surrounded by dozens of others in solidarity, have staged a sit-in to fight the anti-immigrant Senate Bill 4. 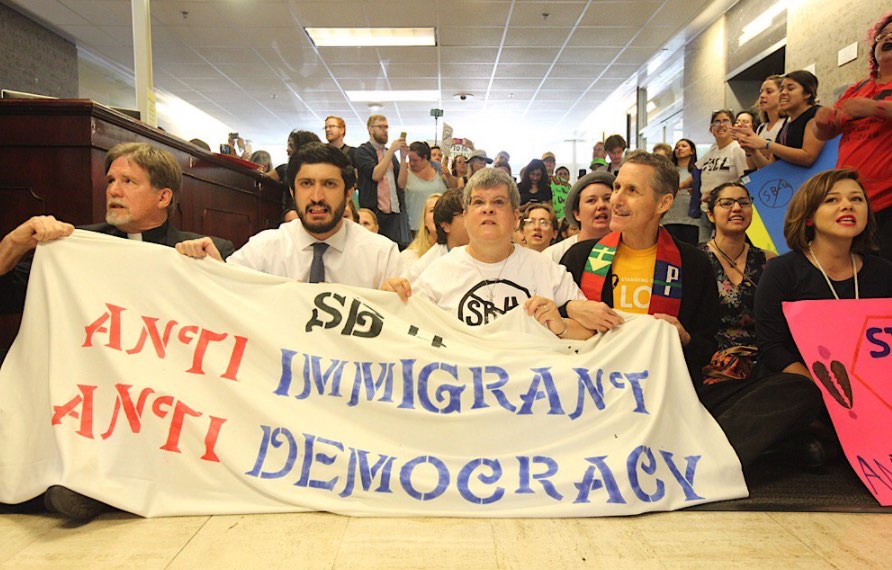 Early Monday morning, during a brief press conference organized by Grassroots Leadership at the south gates of the Capitol, Rigby delivered a message to his undocumented neighbors: “We love you and want you here. We would rather suffer by your side than be guilty bystanders to the cruel and undemocratic tyranny of this administration.”

Afterward, protestors marched with handmade signs to the steps of the governor’s office. They entered and took a defiant seat in the middle of the lobby, announcing they would not budge until Abbott kills the bill. The group chanted: “SB 4 is hate! SB 4 is racist!” and “The people united will never be divided!” in between songs and speeches that castigated the legislation as “unconstitutional” and “unjust.” The sit-in, organized by Grassroots Leadership, RAICES, ICE Out of Austin, Sanctuary in the Streets, and Austin Sanctuary Network, began at roughly 10am.

“We told the Legislature in overwhelming majorities we did not want this law,” former undocumented resident Norma Herrera told the gathered crowd. “It is our moral obligation to resist unjust laws just as it was our civic duty to tell our representatives we didn’t want one to begin with. As a public servant, I worked for the very body that now wants to run me out of my state in supposed allegiance to a voluntary federal program.”

“Our job is to tell [the legislators] they’re fired and they can go to hell,” said Herrera.

SB 4, approved by the House after an intense and emotional marathon debate last week, penalizes cities and law enforcement officials who do not fully comply with federal immigration policy. An amendment tacked on by a conservative lawmaker turned the already punitive bill into an even harsher version, allowing for police to inquire about immigration status if a person is simply detained, not just arrested. That measure ensures racial profiling and increased discrimination, critics of the bill contend. The House and Senate version must be squared away before it moves to Abbott’s desk for a signature.

“This isn’t easy. But I feel like it’s our responsibility to fight back when we are facing the greatest legislative threat to the immigrant community in the whole country under the most anti-immigrant president in modern history,” CM Casar told the Chronicle, while blocking the lobby entrance. “One of Governor Abbott’s top priorities is to oppress and target the immigrant community for his own political gain. So we’re here to send a strong message that we’re not going to be coerced by the governor into betraying our communities.”

The council member has little doubt Abbott will usher the bill into law but says that’s far from the end of the road. “It’s not over once he signs it. He will have to meet protests and sit-ins like this one time and time again,” said Casar. “And I’m going to call on cities and counties across Texas to fight against SB 4 – in terms of litigation and preventing our police departments from being agents of deportation.”

Casar remains undeterred by the fact he may end up in handcuffs for the act of defiance in the government building. He says the risk is marginal compared to the risk of not standing up for his community. “I know this can result in arrest, and I accept that,” he told the Chronicle. “But what I can’t accept is our anti-immigrant politicians like the governor harming our community.”

After roughly one hour, protestors linked arm-in-arm and blocked both entrances of the building. Immigration attorneys started leading teach-ins about the impact of SB 4 around 1pm. Texas Department of Public Safety officers, while watching the event, have yet to threaten arrest. 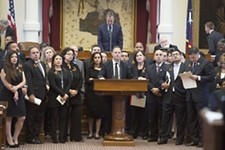 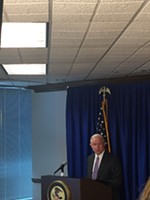