Following a 16-hour debate on Wednesday, the Texas House at around 3am approved an even harsher version of the so-called “sanctuary cities” bill than what was originally proposed on the floor.

SB 4 passed through the House on second reading by a 94 to 53 vote.

Senate Bill 4, authored by Sen. Charles Perry, R-Lubbock, imposes civil and criminal penalties on local law enforcement leaders who don’t fully comply with federal immigration policies and forces campus police to comply with the rules. Rep. Charlie Geren, R-Ft. Worth, carried the House version, modifying it slightly after concern from House members and more than 600 committee testifiers. While the House’s take of SB 4 initially allowed law enforcement to ask about a person’s immigration status when they are arrested – not simply detained, like at a routine traffic stop, as in the stricter Senate version passed in February – an amendment by conservative Rep. Matt Schaefer, R-Tyler, scrapped that softened language. The amendment effectively turns Texas into a “Show Me Your Papers” state and promotes racial profiling, House Democrats charged in response.

House Republicans shot down more than 100 amendments that aimed to inject some sense of compassion to the bill and protect an already vulnerable community from deportation. Lawmakers sought to exclude campus police and inquiries at domestic violence shelters, medical centers, and extra-curricular school activities from SB 4, and to exempt children from interrogation about their immigration status. Those proposals all failed on (mostly) party-line votes. “It is insane to vote against this. In any normal world, we would all vote for this,” said Rep. Rafael Anchia, D-Dallas, of the amendment excluding domestic violence shelters. However, not every Dem amendment died – a proposal to exclude places of worship passed the House 107-40.

At one point during the lengthy hearing, after conferring for nearly two hours, it seemed Republicans and Democrats were ready to strike a compromise deal on the bill – largely to prevent the passage of extreme amendments, including Schaefer’s. But those plans were eventually dashed as the Democrats ran out of time. (Rep. Jason Villalba, R-Dallas, who supported SB 4, accused the Dems on Twitter of giving up the chance to stop Schaefer’s amendment in order to “grandstand.”)

Opposition to the anti-immigrant bill surrounded the debate. Outside the chamber doors, children handed willing lawmakers hand-drawn pictures illustrating their fears of SB 4. Dozens, including Austin City Council Member Greg Casar, gathered at the rotunda to oppose the bill and call on lawmakers to vote it down. The group, which also convened for a vigil, chanted at a volume that could be heard within the House chambers, where a handful of outbursts led to the forcible removal of gallery observers by state troopers. “God is watching you!,” yelled a woman watching the SB 4 debate unfold below her, before being ejected. 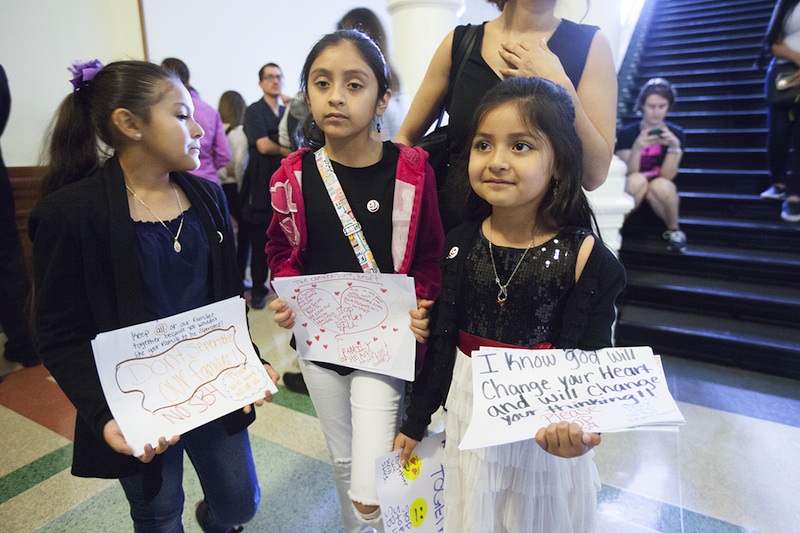 Children stand outside the House chambers to give lawmakers hand-drawn pictures illustrating their fear of anti-immigrant Senate Bill 4. (Photo by Jana Birchum)

The debate opened with emotional and oftentimes heated words from House Democrats, who pled with their Republican colleagues to avert instituting a racist and unnecessarily harsh piece of legislation. Clad in black to show solidarity with immigrant rights, some Dems also wore orange pins with butterflies to demonstrate support for DREAMers. With tears in her eyes, Rep. Ana Hernandez, D-Houston, a former DREAMer who came to the country as an undocumented immigrant, said SB 4 will only perpetuate fear among immigrant families. “I remember the constant fear my family lived with each day and the fear my parents experienced each day as their two little girls went to school, not knowing if there would be an immigration raid that day,” she said. A similarly tearful Rep. Gene Wu, D-Houston, paralleled SB 4 with the discrimination that led to Japanese internment camps and the Chinese Exclusion Act of 1882. “Those are laws that were created out of hatred and misunderstanding,” said Wu.

Facing heckles on the floor, Rep. Eddie Lucio III, D-Brownsville, issued an emotionally charged warning, likely echoing the thoughts of his Democratic colleagues: “Don’t mess with us today. I’m cautioning you. I’m a proud Latino and will not stand for it.”

And on a four-day hunger strike to protest the bill, Rep. Victoria Neave, D-Dallas, read aloud the hateful messages she had received during her fast (including one suggesting she “starve to death bitch”), a sample of the animosity Latinos are already facing, she said. “The House we’ve built together will be destroyed” if SB 4 passes, said Neave. (Before the debate, an energetic Neave told the Chronicle she was “feeling good” and that her stomach had yet to grumble.)

Anchia, chair of the Mexican American Legislative Caucus, sharply questioned Geren on the true intent of the bill. “What is this about? It’s not about ICE detainers,” asserted Anchia, whose amendment to focus solely on detainers failed. Pointing to racist voting maps and whitewashed history textbooks, Anchia cast the legislation as another piece in the long, painful pattern of the Texas government’s discrimination against Latinos. Without naming names, Anchia said some Republicans admitted they were only motivated to go along with the bill because of primary voters. “If you’ve succeeded in one thing, you’ve succeeded in terrifying a whole community,” said Anchia. “This feels like a dark day in the House."

The next stop for SB 4 is a conference committee where appointed lawmakers will gather to hash out the differences between the Senate and House version before giving it a final nod. Yet whatever the outcome, it’ll be a no-win situation: The passage of any version of SB 4 will erode the state’s relationship with Latinos and the immigrant community and place Texas at the forefront of racial discrimination.

“I feel scared, sad, confused, and angry along with all immigrant children tonight,” said local Rep. Eddie Rodriguez, D-Austin, in a statement following the bill’s passage. “My colleagues voted to condemn them to a life of fear and uncertainty, to hiding in the shadows and dreading the day their parents don’t come home from work. Worse, my colleagues wouldn’t even give them the time of day. I refuse to be civil or ‘agree to disagree’ on SB 4 because the stakes are much too high.”